There was no attempt to hide the fact that, with the creation of Rolling Bird, the devs crafted an obvious nod to Namco's side-scrolling action thriller of the 1980s: Rolling Thunder. Here, you take a gun-toting protagonist across horizontally-stretchy rooms, chosen at random, and must fend off an onslaught of opponents that relentlessly rush from the corners of the screen and doors. Tons of doors. All this while bouncing between two planes, the ground floor and catwalks stationed above, entering specific doors for ammo or a submachine gun upgrade, and ensuring you have just enough ammo and health to reach the exit. Visually, though, it bares no resemblance to the coin-op, but it adds a certain charm; looking like a Colceovision port that never was, the game displays a minimalist, oddball color scheme that looks like you're tackling Gumby and friends. 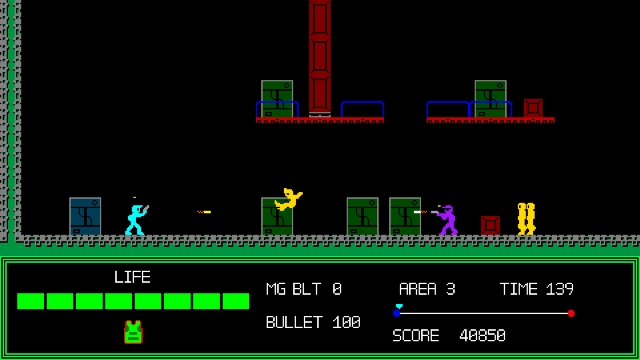 Now, if you've never played or heard of Rolling Thunder, that's completely fine; you don't need a history lesson to fully enjoy this title. The important thing is that the frantic, energetic blueprint of the original survived the leap into this tribute.

Rolling Bird is unrepentant in its quest to throw as many enemies at you, whether it be brawlers, grenadiers that cause splash damage, or gunners that fire from across the screen, doing so at alarmingly chaotic rates the more you make progress through the game. While a big aspect, this is just one component of why the game becomes intense in a matter of seconds. Another factor has to due with your character's restricted movements; you can only shoot in two directions, left or right, you cannot shoot while jumping, you can barely control your jump once in motion, and you will get hit if you automatically exit a weapon door at an unfortunate time. While these might not sound too difficult individually, you must constantly perform varied combinations of said actions under duress.

There's also the potential to run out of bullets within a stage, something that's more likely to happen in later stages when enemies legitimately become hordes. Once exhausted, the game just gives one bullet per shot, adding each subsequent bullet with a slight delay. This grim scenario repeats until you reach an ammo door, die, or make a remarkable escape. If you think moving at a slow, steady pace would help in this situation, you're wrong; along with a timer counting down, there's also a drone that moves in from the left side of the stage, shooting a literal bullet barrier as it moves forward. The game refuses a piecemeal victory. On top of all this, depending on what enemy type causes harm, you only have two to three hits per stage. Fail, and you're sent back to the very first stage.

This all sounds tough and, to some, a terrible mess of a product. However, all these aspects come together quite well and, in doing so, Rolling Bird thrives on the concept of countering chaos with limited movement and firepower. The game expects you to use hand-eye coordination tactics to their fullest, making life-saving decisions on a second by second basis as enemies converge. At its best, Rolling Bird feels more strategy-based than a run-and-gun fest. You might get away with firing mindlessly in the first stage, but everything after requires a methodical approach; knowing when to shoot someone from across the screen in the midst of a horde; knowing when to manipulate enemy movement patterns; knowing how to use objects to impede typical enemy actions. In a frantically-paced, powder keg of a game that you're trying not to ignite, mind you.

It's because of these elements uniquely-meshing together that the Rolling Thunder template stands out from ordinary action titles and, when put in the hands of someone who understands how to use it, becomes an entertaining, thrilling experience. This is especially evident considering the game presents everything it has to offer in the starting stage, yet replaying the whole thing over and over doesn't wear out its welcome. Helps that each stage has different layouts selected at random, further curbing the repetitiveness and predictability. Rolling Bird is a simple, straightforward acknowledgement of a game that came out over 30 years ago to its date, but it's one that nails the original's frantic spirit.

Doesn't hurt that it's also a free downloadable title, along with a Donationware option if you're on Steam. Considering how solid the game is, that's very generous.
4/5

If you enjoyed this Rolling Bird review, you're encouraged to discuss it with the author and with other members of the site's community. If you don't already have an HonestGamers account, you can sign up for one in a snap. Thank you for reading!

© 1998-2020 HonestGamers
None of the material contained within this site may be reproduced in any conceivable fashion without permission from the author(s) of said material. This site is not sponsored or endorsed by Nintendo, Sega, Sony, Microsoft, or any other such party. Rolling Bird is a registered trademark of its copyright holder. This site makes no claim to Rolling Bird, its characters, screenshots, artwork, music, or any intellectual property contained within. Opinions expressed on this site do not necessarily represent the opinion of site staff or sponsors. Staff and freelance reviews are typically written based on time spent with a retail review copy or review key for the game that is provided by its publisher.