Were far enough removed from the day EA Playground originally arrived in stores that youll likely only find it available in bargain bins or used game shops, where it usually sells for a few bucks. I spent $5 on mine, for instance. At that price, I was quite content, but Id possibly be singing a different tune if I had bought it a few years earlier.

Like many titles released for the Wii, EA Playground consists of a collection of mini-games. In this case, there are around 10 in total. Three are very basic--shoot as many hoops as you can within a limited time period, dribble a ball 20 times in a row, or catch a bunch of butterflies in a net before the time expires--and the rest have more meat to them.

In the multi-player mode, you can participate in most of the activities with as many as three of your friends. Each player needs only a Wii Remote. Available attractions include Dodgeball, Kicks, Slot Car Racing and Paper Racers. If youd like to try your hand at some of the other diversions, youll need to instead enter the Quick Play mode by yourself, or play through the games equivalent of a campaign (which also grants access to additional content such as new tracks or vehicles). 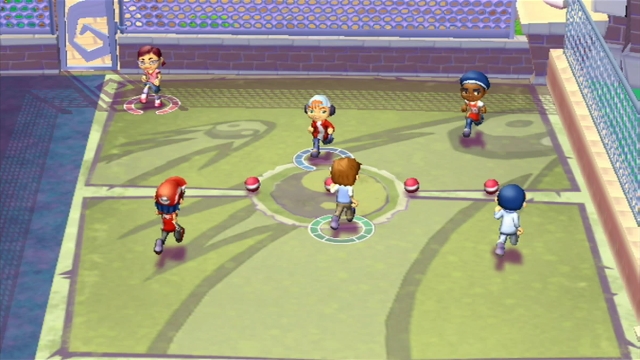 The single-player mode starts when your custom character walks onto the playground and is greeted by the Sticker King, a cocky young lad who has filled his book with stickers gained by defeating the other children in a variety of athletic pursuits. His primary purpose is to introduce you to each new area of the playground that you eventually unlock, and for a few marbles, hell also give you special stickers that unlock performance improvements in each activity. You can snag a sticker that lets you serve the ball more aggressively in one of the ball-based selections, for instance. Once you have soundly defeated every other player, you can compete against the Sticker King in a special gauntlet of games to earn the final sticker and claim the title.

The playground environment is actually put together well. It features attractive colors and reasonable draw distance, considering the hardware limitations, even if some textures are muddy upon close inspection. The perspective resembles something from Animal Crossing: City Folk, in that the ground is slightly rounded and it scrolls underneath you as you run around in search of marbles and opponents. Peppy music plays in the background, looping incessantly, and youll probably find yourself humming along before you realize that youve been the victim of an earworm. Though the playground is divided into four separate regions, the load time when you pass from one to the next is surprisingly brief, leaving control issues to serve as my main complaint. Your character doesnt move where you tell him to, I noticed. Pressing Up on the d-pad makes him trot forward and pressing Down makes him run in the opposite direction, but Left and Right merely strafe. It feels awkward, especially when youre trying to do something that requires precision--like catch butterflies--and the camera swoops erratically.

The hoop shooting mini-game also frustrated me. There are several versions, and each one requires you to score a higher number of baskets within the time limit. To clear the events toughest iteration, you must sink 20 baskets within 30 seconds. Each shot you take requires a jerk of your arm--hard but not too hard--and the repetitive motion quickly leads to sore muscles. Thats all while an arrow is moving back and forth with increasing speed. When I finally beat the challenge after an hour or two of effort and growing irritation, I felt like I had been through a grueling day at the gym. 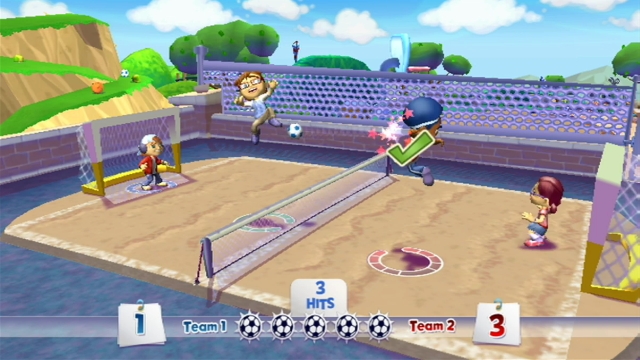 The main sporting events are what make up the bulk of your adventure, though, and theyre actually pretty good. You can usually clear one with relative ease and then youll be offered dares that you can complete to claim additional marbles you can spend on the aforementioned improvements that make it easier to win against tougher opponents.

Dodgeball is a basic game, following the standard rule set. You run up and grab balls from the center line, then chuck them at your opponents by swinging the Wii Remote forward. Swinging it to the side, meanwhile, allows you to dodge out of the way of an incoming ball. You have two allies and have to take out three opponents in total, so a few of the matches near the end can grow quite heated.

Tetherball pits you against a single opponent. You take turns slapping a ball as it swings around, attached by rope to a high pole. The goal is to hit the ball so that it gets past your adversary enough times to finally wrap tightly against the pole. Sometimes, that requires skillful timing, since a match can go wrong in a hurry if you drop your guard.

Kicks is a combination of soccer and volleyball. Goal nets are placed on either end of the field, with a net in the middle. Teams of two compete, trying to slam the ball into the opposing teams net. The first duo to make 5 goals is the winner, which I guess makes it a best of 9 event. 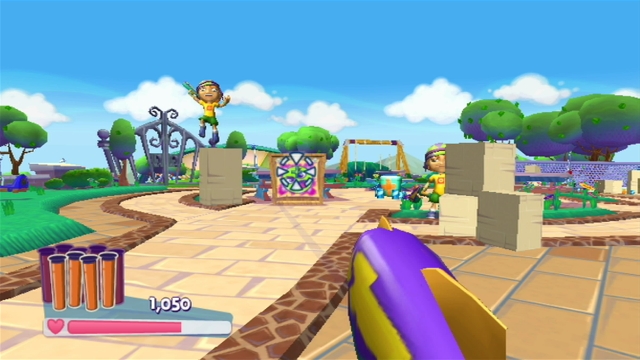 Slot Car Racing is a surprisingly fast-paced game where four cars race 8 laps around a track. The winner is whoever crosses the finish line first. Along the way, there are multiple lanes, speed boosters and power-ups such as tacks that slow down rivals (or you, if you run afoul of them). You can also tap A twice in rapid succession to perform a quick speed boost or to ram the other drivers, which is always satisfying.

Wall Ball is another one-on-one event, where you take turns hitting a bouncy ball against a wall. You can aim left and right, which may allow you to snag power-up icons that appear. One seems to make the ball move more quickly on the next hit, and another briefly swallows the ball into a vortex before spitting it out again. Power-ups dont actually seem to get activated all that frequently, though, in my experience. That leaves it as a fairly straightforward affair.

Paper Racers begins when you hold the Wii Remote like a paper airplane and swing it forward, at which point your on-screen paper airplane will glide through one of several courses. You can collect clocks to extend your timer--very important in later areas--and you have to avoid obstacles. Its a solid event.

Finally, Dart Shootout plays like a first-person shooter, only youre armed with what appear to be NERF guns. You can fire a few rounds at targets before you have to tilt the Wii Remote up to reload. Its very basic, but still a lot of fun because it requires some strategy, particularly by the time you have to hold up a shield to deflect a barrage of shots from an adrenaline-fueled boss player and his rowdy crew.

Thanks to a solid collection of generally high-quality events and a fun playground mechanic that adds a bit of depth to the whole affair, EA Playground winds up serving as a better than expected collection of themed mini-games. Completing everything will likely require six or eight hours of play, which feels plenty reasonable. Group play can also be quite enjoyable and should extend the amount of time youre happy to spend with the game. If you can find it for a good price and youre in the mood for something accessible to enjoy with youngsters, you could do much worse than EA Playground.
3.5/5

If you enjoyed this EA Playground review, you're encouraged to discuss it with the author and with other members of the site's community. If you don't already have an HonestGamers account, you can sign up for one in a snap. Thank you for reading!

© 1998-2020 HonestGamers
None of the material contained within this site may be reproduced in any conceivable fashion without permission from the author(s) of said material. This site is not sponsored or endorsed by Nintendo, Sega, Sony, Microsoft, or any other such party. EA Playground is a registered trademark of its copyright holder. This site makes no claim to EA Playground, its characters, screenshots, artwork, music, or any intellectual property contained within. Opinions expressed on this site do not necessarily represent the opinion of site staff or sponsors. Staff and freelance reviews are typically written based on time spent with a retail review copy or review key for the game that is provided by its publisher.