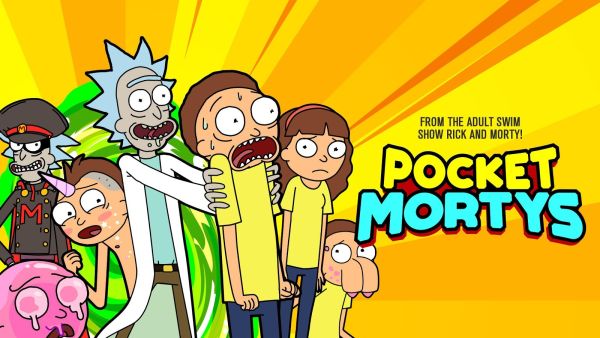 Innumerable alternate realities exist, and in each of these dimensions dwells a brilliant inventor named Rick Sanchez. Every Rick also has a grandson named Morty, who tags along with him during his inter-dimensional and/or interplanetary adventures. Recently, though, our Rick discovered that the Ricks and Mortys across multiple dimensions were separating from each other. As it turns out, some of those Ricks have amassed collections of Mortys to pit against one another in guided battles. As you can imagine, our world's Rick decided to get in on the action, much to the chagrin of his grandson.

Pocket Mortys is a simple Pokemon-style app. You assemble a team composed of oddball offshoots of the titular youngster, travel between dimensions and square off against either wandering Mortys or trainers in turn-based combat. Each unit possesses an arsenal of physical attacks, buffs and debuffs. They fall under one of three attributes: rock, paper or scissors. In other words, a rock-based attack inflicts severe damage against a scissors Morty, but doesn't do jack when nailing a paper combatant, and so on.

You don't need to be a strategic genius to be successful, either. Encounters only last a few minutes and mainly consist of spamming your best offensive options. As long as you mind your opponents' rochambeau properties, strike aggressively and heal when needed, you should be able to knock out a Morty with a few blows and survive the encounter more often than not. Of course, the computer's characters are capable of unleashing similar carnage, so don't expect to snooze your way through each altercation. 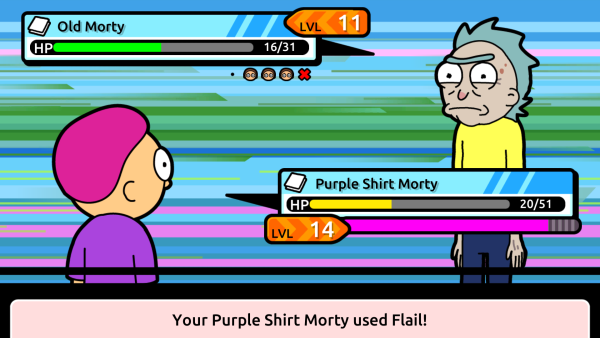 As you can tell, I'm running out of praise for Pocket Mortys' combat system. It isn't a broken setup, to be sure, but it's nonetheless dull. You see the same abstract background throughout your journey, along with familiar battle animations. Visually, it doesn't matter whether Morty executes a jab, a fierce lunge or a maneuver called "vaccinate," because every strike results in a homogeneous thwack animation. The same goes for buffs and debuffs, which display either a refreshing blue shower or a malevolent aura, respectively.

I wish I could say that Pocket Mortys' stage designs save the day, but every level is procedurally generated and unadorned. You travel through samey, tight walkways and run afoul of garden variety foes. There are no surprises, qualities or hazards that set any single stage apart from the rest, aside from the environmental graphics. It doesn't matter if you're traversing a snowfield or a cave or an alien ship; the effect is the same.

Pocket Mortys remains an addictive, albeit ultimately so-so adventure because of its collecting and combining features. There are over one hundred sixty units to gather, with multiple means of doing so. The most common method is to purchase or craft a microchip and stick it to a sufficiently weakened stray Morty. If you're feeling lucky, you can instead pay actual money to buy a Blips and Chitz ticket or two, redeemable at any similarly named booth. These devices function like capsule toy machines, giving you packages full of various items and one random Morty. 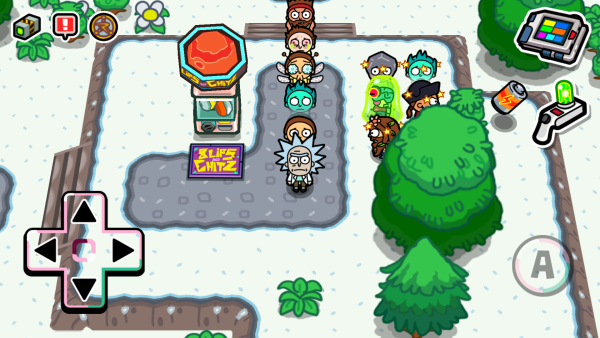 Granted, a fair number of the recruitable lads are unimaginative and hardly worth the effort to obtain, like Red Shirt Morty or Mustache Morty. However, the payoff lies in finding creative, funny or even terrifying Mortys, including a pirate, a vampire, an anthropomorphic slice of pizza, a carnivorous plant and a zombie suffering from a fungal infection that presents like Cordyceps.

The charm of accumulating battle-ready teenagers only lasts so long, though. Eventually, you reach a point where you've collected so many individual Mortys that only the super rare ones are left. The rigmarole of exiting and re-entering the dungeon or earning Blips and Chitz tickets becomes a chore, and thus the game's collection feature turns stale. Pocket Mortys could have made up for its inevitable souring by providing players with additional material. I mean, where's the online multiplayer? Seasonal events? Non-fetch quest optional missions? Yeah, the game sports a battle arena side quest, but such content isn't useful when the combat system isn't all that great to begin with. 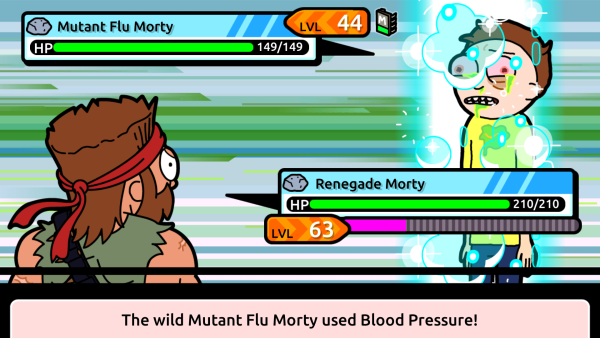 Don't get me wrong. I'm not saying Pocket Mortys isn't a worthwhile title for fans of "Rick and Morty." It offers plenty of its brand's trappings, as well as a few humorous cutscenes. Rick even belts out a few of his fake catch phrases from the "Total Rickall" episode, such as the classic "Wubba-lubba-dub-dub," "Grass tastes bad," and "Rikki Tikki Tavi!" Familiar faces also pop up, including alien species from the show, Morty's father Jerry, Mr. Poopybutthole and Birdperson. Sadly, after you advance midway through the title, it stops introducing new features and characters. You see the same content reappear, to the point that it all becomes routine.

Pocket Mortys isn't a terrible mobile app, but non-fans aren't likely to care much for it. It grows wearisome halfway through its campaign, when you realize you need to play through at least forty stages to finish the story. The game offers plenty of fan service, but even then it doesn't remain fresh long enough to warrant a full playthrough. I'd say the best approach is to download Pocket Mortys and play it every now and then, but not to get too obsessed with it.
3/5

If you enjoyed this Pocket Mortys review, you're encouraged to discuss it with the author and with other members of the site's community. If you don't already have an HonestGamers account, you can sign up for one in a snap. Thank you for reading!

© 1998-2021 HonestGamers
None of the material contained within this site may be reproduced in any conceivable fashion without permission from the author(s) of said material. This site is not sponsored or endorsed by Nintendo, Sega, Sony, Microsoft, or any other such party. Pocket Mortys is a registered trademark of its copyright holder. This site makes no claim to Pocket Mortys, its characters, screenshots, artwork, music, or any intellectual property contained within. Opinions expressed on this site do not necessarily represent the opinion of site staff or sponsors. Staff and freelance reviews are typically written based on time spent with a retail review copy or review key for the game that is provided by its publisher.