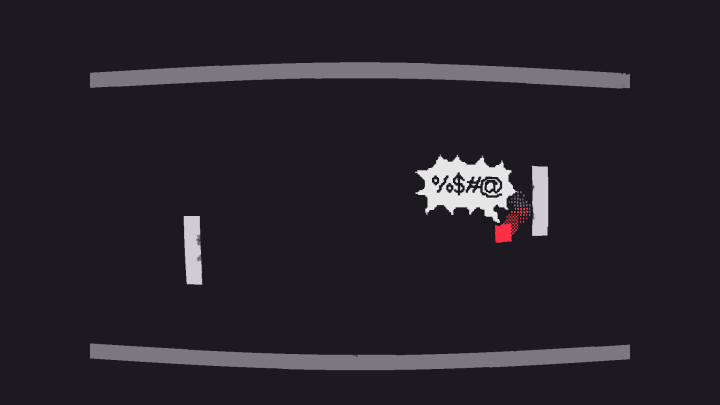 qomps very first requirement of you is that you escape. The catch here is that what youre escaping is Pong. Turns out, the little ball thats spent decades being battered back and forth is just about done with that mess, and yearns for a little bit of digital freedom. To achieve this, you need to help it slip past the defences of its longtime tormentors, the paddles. Along with a newfound craving to be free, the ball has also acquired a neat little trick; it can now change its vertical direction on whim, letting it fake out a change of pitch before doubling back on itself. The paddles werent prepared for this; such trickery is beyond them.

But true freedom, it turns out, is an intricate maze of perils, calculative failure and routine death. The maze and the perils are forced on you, but the deaths are always your fault. Free from the oppression of Pong, qomp reinvents itself as a precision one-button platformer, letting you prod your key of choice to effect a 90° vertical alteration. Only, thats all you have control over; the ball still tracks from side to side, and the only way to reverse this is to make contact with a solid surface. The premise is simple; manipulate the ball so it regularly bounces off a suitable surface, allowing it to ricochet happily through the maze.

The maze is not keen on this, and goes out of its way to make things difficult. Theres expected pitfalls, like spike-lined walls youll need to avoid, or temporary buffers that wear down with repeated use. Sometimes, rotating blades will swing back and forth like a particularly poorly designed clock, forcing you to twitch back and forth until you can match their rotation. Theres a series of chute climbs where the only thing protecting you from the spikes is a puff of smoke that dissipates with the slight connection. Not to worry, though; this triggers a new puff to play at being a wispy safeguard. Only, the puffs dont necessarily solidify in order, meaning sometimes you need to take one step back down the chute in order to eventually gain two bounces up. 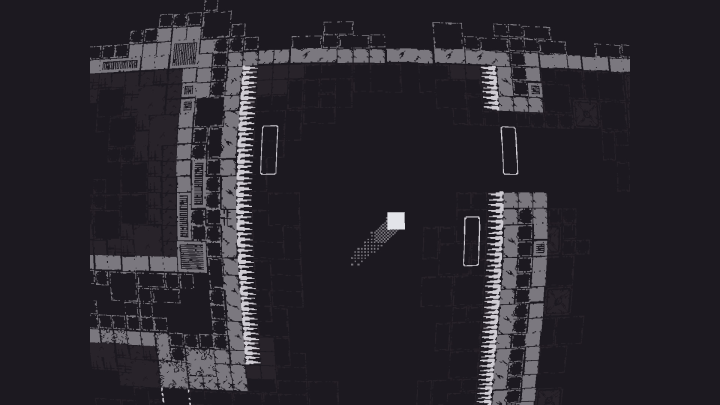 Though the maze is devious, it remains fair, and all of its myriad of dangers can be bypassed with enough forethought and reasonable twitch skills. Most early deaths will be blamed on qomps unique control scheme as, in a moment of panic, youll often forget you can only control up and down while figuring out that no amount of button mashing is going to make left or right happen. But thats okay, because the opening stages dont make heavy demands on you, and the way forward is always clear and achievable. And if its not, that's okay, too; qomp comes with numerous ways to make the game easier for people, from adding tracker arrows to confirm which way a button press will send you, to the ability to outright make the ball invincible.

To each their own, but most wont find it too taxing to bounce their way to the end of the maze in a handful of hours. qomp isnt a marathon slog, and its easily beaten in just a couple of sittings. Its a good length for this sort of game, ensuring that the various tricks and traps dont feel repetitive. Mainly because the maze has so much stuff to throw at you. Sometimes you need to explore a reasonably easy stretch to obtain a key and do away with a pesky locked tile. But picking up the key triggers a bunch of hidden traps, meaning the return leg is considerably more dangerous. Sometimes, the walls arent walls, but cable that the ball attaches to, acting like a kind of monorail, whether you want to head in that direction or not. Some areas are flooded with water, which drastically alters your balls physics and, sometimes, theres greedy bloated Pac Man-like creatures that will chase you around the screen.

Theres tons of cool ideas, like how qomp pays homage to another retro title, Snake. Hitting a certain power up will mean your ball leaves a growing trail behind it, familiar to anyone who ever owned a Nokia 3310 phone. That tails not just a nifty effect; bash into it, and its game over. But thats not that big a deal; death is a minor inconvenience, and you can rely on a rapid succession of respawns much like Super Meat Boy should you die. And you will die. Often. But youll pop back into existence, knowing full well you can bypass the previous obstacle better this time. Now youve had a trial run at it. Now that youve figured out the hook. Youll tell yourself that a lot, because there's nothing qomp throws at you that feels unfair.

If you cant blame the game, that means it must be your fault, and screw that nonsense. And so the just one more try effect kicks in there goes your evening.

If you enjoyed this qomp review, you're encouraged to discuss it with the author and with other members of the site's community. If you don't already have an HonestGamers account, you can sign up for one in a snap. Thank you for reading!

© 1998-2022 HonestGamers
None of the material contained within this site may be reproduced in any conceivable fashion without permission from the author(s) of said material. This site is not sponsored or endorsed by Nintendo, Sega, Sony, Microsoft, or any other such party. qomp is a registered trademark of its copyright holder. This site makes no claim to qomp, its characters, screenshots, artwork, music, or any intellectual property contained within. Opinions expressed on this site do not necessarily represent the opinion of site staff or sponsors. Staff and freelance reviews are typically written based on time spent with a retail review copy or review key for the game that is provided by its publisher.