When it comes to point-and-click or classic adventure style games, Backbone may appear to be much like any other indie pixel-art project. If you only care about the gameplay itself, then you will likely know whether or not this game is for you on that description alone. However, much like the visuals and the narrative, there is a lot more charm, intrigue and suggested complexity beneath first appearances.

Normally I wouldnt devote much time talking about the visuals, yet I cannot help but find this strange collage of 2D and 3D assets alluring upon close inspection, and I can only describe it as a virtual pop-up book. Its nowhere near as obvious as the likes of Paper Mario, but the effects elevate an otherwise traditional presentation to suit the games themes for subtleties. This effect is more pronounced along the city streets where the road and sections of the buildings stand out among the civilians and vehicles that appear like props on a stage. Some indoor areas like Howards house also demonstrate various lighting, shadow and other visuals effects to give an otherwise flat image a sense of depth. This level of detail and this focus on perspective also applies to the character designs along with the writing that does not conform to traditional anthropomorphic sensibilities. 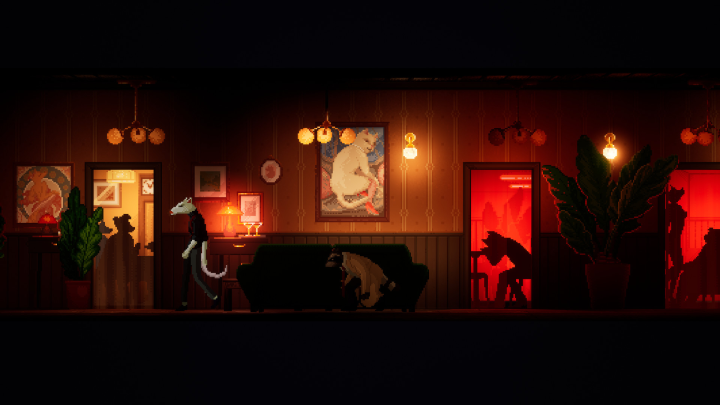 Since the first teachings of Aesops fables to modern animations like Zootopia, anthromorphic characters have been used to personify aspects of humanity for the purposes of storytelling. In most cases, these types of characters have been used as tropes or flat characters with one-note personalities, which is not a crime in of itself. You can likely imagine various similes like as slow as a sloth, as gentle as a lamb, or as loose as a fox. The purpose behind these tropes is to teach us how to recognize certain human behaviors, those we desire and those we abstain from indulging, and how to handle those situations with easily impressionable characters. At the same time, however, you can also subvert those associations to teach another lesson; one that demonstrates how people may appear simple on the outside, yet they are far more complex once you get to know them. Either approach is a valid use of these kinds of characters, but its something that Backbone almost completely ignores.

Personally, I do not mind that these characters are not caricatures of real people as you can overdue these tropes with time, yet I do wonder what this art style accomplishes other than being an artistic choice. There are some hints of a hierarchy of species and some vernacular used centered around Apes, but you could easily replace the species of most characters without altering their personalities. Perhaps that outcome was intentional as to not fall victim to the stereotypes I have outlined before, or the point is to showcase how these characters are meant to come across as real people. Given how much detail is put into every character, I would likely argue the latter idea is what is meant to be taken away by the audience. Now this criticism isnt a complaint as it is an honest question about the developers intentions and how they can be better communicated to the player, and, obviously, my experience thus far is only based on the prologue. 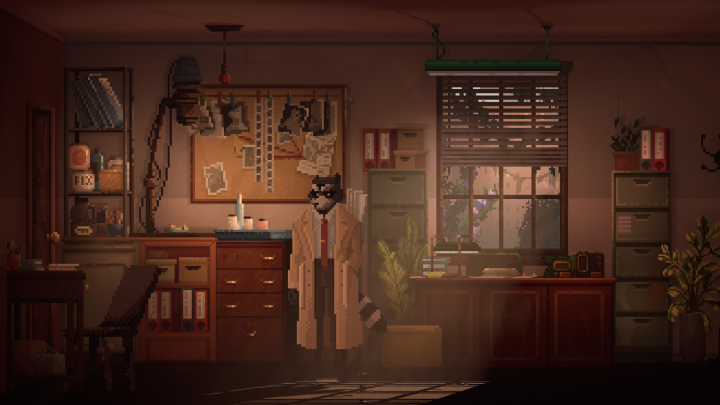 Speaking of the prologue, how about we break character for a moment to talk about the gameplay? As mentioned beforehand, Backbone is a point-and-click style adventure game, yet that description wouldnt tell you the whole story.

While the gameplay mostly revolves around exploring environments, gathering clues and solving brainteasers, there are a few additional elements to keep the gameplay from feeling stale. (Thankfully, all the puzzles in the demo did not operate on moon-logic or they did not rely on pixel-hunting, so if those complaints were your greatest concerns, then you can rest easy.) Cutscenes feature branching dialogue trees with some in-game effects such as revealing additional details about other characters or alternative solutions to obstacles. There are also light stealth sequences where you can interact with the environment or use the foreground to avoid detection, but these situations come across as interactive cutscenes given that they are too simplistic and too scripted. Perhaps if these sequences offered various solutions as well as in-game failure-states to alter your playthrough, then they wouldnt stand out from the rest of the gameplay. Even when most of the dialogue choices are flavor text rewards, they still tailor your overall experience by shaping how your Howard plays out his story.

Again, all these gripes are based on a prologue that may or may not share the same problems in the full game, but they are aspects that can be resolved. Little gameplay improvements such as slightly randomized puzzles for every playthrough or various failure states are enough incentives to enhance the games replay value along with its narrative rewards. However, none of these grievances are enough to detract from the overall experience, so I recommend you try the demo for yourself to uncover the rest of this story. After all, you and I both know youre trash.

If you enjoyed this Backbone: Prologue review, you're encouraged to discuss it with the author and with other members of the site's community. If you don't already have an HonestGamers account, you can sign up for one in a snap. Thank you for reading!

© 1998-2020 HonestGamers
None of the material contained within this site may be reproduced in any conceivable fashion without permission from the author(s) of said material. This site is not sponsored or endorsed by Nintendo, Sega, Sony, Microsoft, or any other such party. Backbone: Prologue is a registered trademark of its copyright holder. This site makes no claim to Backbone: Prologue, its characters, screenshots, artwork, music, or any intellectual property contained within. Opinions expressed on this site do not necessarily represent the opinion of site staff or sponsors. Staff and freelance reviews are typically written based on time spent with a retail review copy or review key for the game that is provided by its publisher.