Despite the blessed status Symphony of the Night holds in the gaming community, there was a nearly five year gap until we saw another game we now label as metroidvania-style. Once that drought ended, we were flooded with Castlevania on handhelds. By the end of the 2000s, Castlevania (and Igarashis style of Castlevania in particular) had become a nearly annualized event. Between 2002 and 2008, five Igavania titles appeared on GBA and DS (and a sixth if you include Circle of the Moon, though Igarashi was not involved in it). Despite being well regarded by players and critics, each successive game sold less than the previous.

What makes this period in Castlevania so remarkable is none of these games attempted to do the same thing. Each one has unique qualities that give in merits over what came before and after. As the last metroidvania-style Castlevania game that Igarashi worked on before leaving Konami, Order of Ecclesia is perhaps the most divergent of the bunch.

We started to see a move away from a single-dungeon design in Portrait of Ruin, where the player left Draculas castle to enter themed portraits. In practical terms, it wasnt that different from having a single castle with themed areas because the player still needed to traverse the central castle anyway to find the portraits. Order of Ecclesia takes this a step further by eliminating a central castle altogether. This makes a huge difference in how Order flows compared to its predecessors.

Order of Ecclesia takes cues from RPGs without a free-ranging world map. The player selects a location from a map screen to travel to and new locations are found not through exploration but by pushing the games predictable plot along, eliminating what many would consider to be the defining trait of Igarashis style--exploration. With a few exceptions (most notably being the final area), each area is a linear, straight shot to a boss or event to unlock a new area on the map. In fact, some levels are literally flat horizontal affairs, with nary a platform to be seen. Despite the surface similarity to Portrait of Ruin, without needing to explore to open new areas, Order is focused on action more so than any other post-Symphony entry in this series. 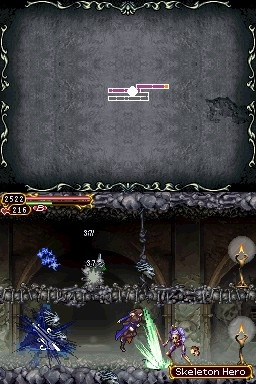 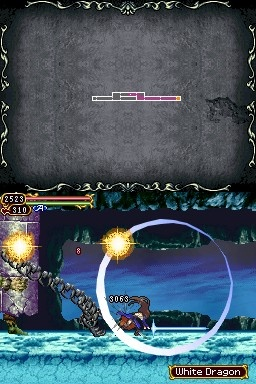 The majority of areas are linear and scroll horizontally, a stark contrast to the depth and interconnected areas that popularized metroidvania-style games.

The de-emphasis of exploration dulls the RPG elements that differentiated Symphony of the Night from its predecessors. Allowing Alucard to level up and gain power through finding equipment rewarded exploration-minded players and leveled the field between skilled players and those who just wanted to enjoy the adventure. Not everyone can beat Castlevania III, but by rewarding exploration with more power and abilities, most people can beat Symphony up through Portrait of Ruin given enough time and effort, a quality that Igarashi himself pointed out several times as an intentional design choice.

Not everyone can beat Order of Ecclesia. By reducing exploration, Order of Ecclesia is a significantly more difficult (borderline unfair) game. Even as a veteran of Rondo of Blood and Castlevania III, I found Order punishing in unappreciated ways. Health restoring items are expensive and not particularly effective, armor is sparse and expensive, and Shanoa has no weapons to upgrade. Enemies on the other hand are damage sponges that hit extraordinarily hard. These are some of the longest and sloggiest battles in the series and not in a fun way either.

The famous crab boss near the beginning is a great example. This boss has unlimited HP and is only defeated by hitting it enough times to cause it to break the ceiling. After it breaks through enough ceilings, the player will reach an elevator that can be forced down to smash the boss at the bottom. Its a really cool looking set-piece, but the encounter can take upwards of ten minutes because the boss is below the player and difficult to reach. If the player makes a mistake--or misunderstands the poorly telegraphed instructions of the set piece--they have to do the entire thing all over again. The first time I saw the elevator, I thought it was a platform I could jump up through (you cant) and ended up falling back down the shaft and dying. I didnt lose--the game failed to tell me what it wanted me to do to pass its poorly manufactured test.

So many bosses follow a similar methodology. They pull out devastating attacks that wipe out half Shanoas health before the player has the opportunity to learn the pattern. If you are playing blind, I dont see how any of these bosses could be completed on the first few tries; youll need to die several times learning the pattern, and even after youve put in that effort the fights are so long you might make a small mistake at the end anyway that ends up costing Shanoa her life again. As a result of Order's linear structure, a player no longer has the option to just nope out of a boss and come back later. Sure, you can go grind, but there won't be anything else substantive to do until you break the meat wall in front of you. Grinding won't help much anyway. 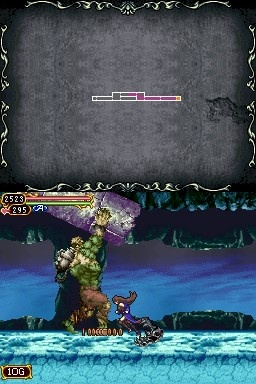 Each boss has an interesting design and pulls out surprising attacks, but have too much HP and hit too hard to be fun.

While the player does grow in levels and abilities, that growth feels linear compared to the challenges that await Shanoa. Rather than obtaining weapons, she obtains glyphs that confer weapon and spell-like abilities. This is another element that can be found in prototypal form in Portrait of Ruin. One of the bonus modes in Portrait, Sisters Mode, allowed the player to run through the game as magic-wielding vampires. The sisters attacks consumed MP, but MP bounced back quickly, much like a shooter with an overheat mechanic. The difference here is that Shaoa can change her abilities. So rather than getting access to half a dozen great swords (or whatever your preferred weapon is), Shanoa gets a glyph that functions like a great sword.

Order was built heavily around the concept of glyphs and glyph attributes. Enemies have strengths and weaknesses to different types of glyphs, and the player must adapt accordingly to succeed. To compensate for the frequent glyph changing, the player can have three sets defined and switch between them without opening a menu. The player will still need to spend some time micro-managing abilities in the heat of combat anyway, which can bog some areas of the game down or turn a challenging fight into a frustrating one very quickly. This is made all the worse because the glyphs have Latin names, so youll need to hover over them to read the description rather than just skimming the list for the ones you want.

It is not until the final act of the game that Order of Ecclesia becomes the game you wanted it to be--when you can finally enter Draculas castle (oh, spoiler: Draculas the villain again). It comes in too late to enjoy. By this point, youre sick of the bosses that required half a dozen attempts and youve been turned off by playing so many levels that were just flat, linear gauntlets of enemies.

Theres a lot to love about Order of Ecclesia. The sprite art is phenomenal, the concept of replacing traditional weapons with magic is a fun shake-up, the music is fantastic as usual, and playing as a strong female protagonist in a series that has treated women as school-girl sacrifices is as satisfying as it feels sincere. However, unlike every other of Igarashis Castlevanias, Order was not one I felt compelled to replay immediately after finishing it. There's no alternate routes to explore and the map screen is really just a level select menu, so I could just pick and choose stages to replay. The only thing I'd be missing out on are the bosses, and Im not fighting that stupid crab again.

If you enjoyed this Castlevania: Order of Ecclesia review, you're encouraged to discuss it with the author and with other members of the site's community. If you don't already have an HonestGamers account, you can sign up for one in a snap. Thank you for reading!

© 1998-2021 HonestGamers
None of the material contained within this site may be reproduced in any conceivable fashion without permission from the author(s) of said material. This site is not sponsored or endorsed by Nintendo, Sega, Sony, Microsoft, or any other such party. Castlevania: Order of Ecclesia is a registered trademark of its copyright holder. This site makes no claim to Castlevania: Order of Ecclesia, its characters, screenshots, artwork, music, or any intellectual property contained within. Opinions expressed on this site do not necessarily represent the opinion of site staff or sponsors. Staff and freelance reviews are typically written based on time spent with a retail review copy or review key for the game that is provided by its publisher.