Unfortunately, with the quality of modern Steam releases, I fear Spirits of Xanadu is an example of a game being glossed over due to initial appearances. With the popularity of newcomer-friendly game engines like Unity, there is a greater need to distinguish indie devs with great ideas beneath their own limitations and those who merely cobble together assets into an excuse of a game. Spirits of Xanadu is certainly not within the latter camp as there is something worth playing beneath its shortcomings as a two-man project. In fact, its quite effective of a System Shock-lite/Deus Ex-lite experience if you have yet to play a game with zero handholding. If you ever wanted to give these types of a games a chance, then Spirits of Xanadu would be the perfect appetizer, enough to leave you wanting a main course.

This recommendation shouldnt discredit Spirits of Xanadu nor set false expectations because what few elements are included are surprisingly well-done. Given the minimalistic aesthetic, the simplisitc gameplay and its brevity, its rather telling how these bare essentials magnify the games far greater qualities such as its environments and its narrative. In addition to these immersive elements, there is a level of playfulness all too common to immersive sims that gives the game an unmistakable character around every corner either to flesh out its mystery or to spend time poking fun at its own seriousness as a game.

Subtlety, The Intangible Yet Impactful Means of Experience

If you were to distill the narrative and the themes into its essential components, Spirits of Xanadu wouldnt sound as impressive on paper. The experience is essentially about exploring a space station after the effects of an outbreak resulting from a first-contact with aliens. Add a station full of robots made hostile, audio logs, environmental storytelling to flesh out its characters, plus a visiting engineer sent to investigate as well as to repair the station, and you essentially have the plot of any game inspired by System Shock. However, despite these obvious inspirations, Xanadu is a station brimming with character for its inhabitants both human and alien. This is partially accomplished from its level of subtlety to convey this information, especially in terms of its Eastern mythological allegories, which makes this story more unconventional to experience than it may initially seem. 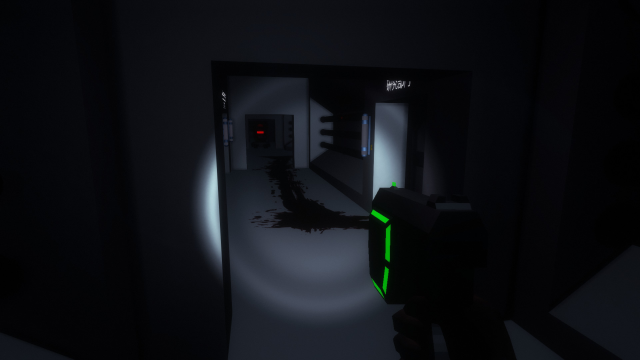 Now Eastern mythological themes are outside my expertise, yet its easy to see how these foreign concepts and how they are associated with the extraterrestrial presence makes this game more alien than it truly appears. Aspects such as the Djinn legends, the Eastern masks, and the station itself having Eastern influences all make it an unfamiliar landscape compared to many other space stations. Beyond this minor observation, its difficult to assess how effective the game communicates the similarities of human mythos with a first-contact scenario. However, what really sells the storyline are the audio-logs performances and the writing behind these characters, which create vivid personalities such as the movie-critic, the careless doctor, and the zealous infected believer. Considering an average playthrough will take between one and a half to three hours, the amount of believable characters is impressive given how much time they had to develop these characters with few scripted elements beyond the introduction and the final three outcomes.

This aspect, in addition to the lack of handholding and the lack of cutscenes, creates a far more engaging experience as you fill in the details. More often than not you are alone to brood on the storyline as you replay logs and discover new things as you wander the Xanadu. Notes about the environment or lore elements on the walls, the computers, the audio logs, etc. tell a far more impressive story than if it chose to create scripted moments to explain everything. Sometimes youll come across revelations as an accident, and its this element that truly does shine Spirits of Xanadu as a mature way to convey its simple narrative. This is made especially clear with the three endings as they barely communicate the consequences of your decision except with a Mission Failed/Accomplished screen and a casualty count. The mysteries it leaves unresolved are left for you to ponder their meanings, and the resolutions it creates are for you to quest what is the best outcome for humanity.

Enough to Stir Curiosity, Though Never Enough to Satisfy It

Where the storytelling excels at conveying everything necessary to enjoy Spirits of Xanadu, the gameplay leaves a lot to be desired, especially in comparison to its many inspirations. The problem isnt that the gameplay is unresponsive or incomprehensive like the original System Shock; the issue is the gameplay is rather bland as the combat and the puzzles meet a borderline of acceptability. 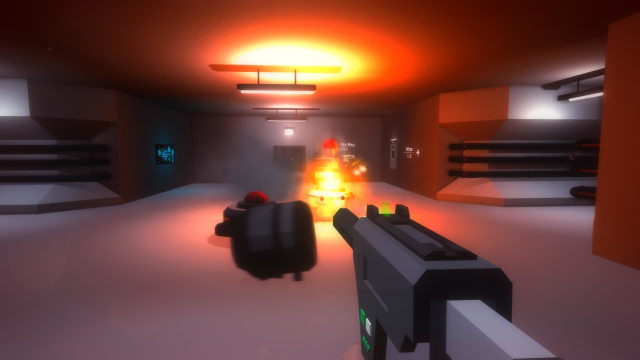 Combat is perhaps the games weakest element as there is no inventory management whatsoever. Health simply regenerates with zero penalties beyond Ironman mode, enemies are among four types of robots with simplistic AI, and weapons simply have unlimited ammo to make up for their shoddy implementation. Within the Xanadu you can discover a shotgun and an assault rifle beyond the wimpy pistol, though on my first run I had destroyed nearly all the enemies before I found either weapon as the robots do not respawn. These elements can be ignored entirely with the Peaceful mode if you desire, which wouldnt affect the experience due to how the best elements are those focused on the narrative. This is the only element that would be contrary to the games inspirations as combat was a major component.

The rudimentary puzzles are the only notable flaw that does water down the experience. From the beginning to end, the mission objectives are simple as you restore the ships auxiliary power and engines, and then, lastly, fix the navigation systems. These solutions are rather simple puzzles where enough exploration will yield the solution if you pay attention. The remaining objectives that lead to different endings are also rather simple, varying in how much work is required to achieve them. None of these puzzles, however, feel pointless as the lack of handholding obscures their simplicity, and some of them will unlock various Easter-eggs. At worst, these moments can take the player out of the immersive experience such as the Metal Gear alarm, but most further add to the charm of Xanadu such as an arcade cabinet, a security terminal to shut off the defenses, and other achievement-based unlocks. These bits of experimentation pale in comparison to other immersive sims such as hopping on explosives in Deus Ex or the Rope arrow in Thief, yet these minor distractions get players curious about how they can influence the environment as small lessons on testing the games limits. Lessons both for the players and the developers, hopefully, carry on to the future.

A Place Where Nobody Dared to Go

Although there are plenty of things to find Spirits of Xanadu admirable, its an experience some people may come away feeling unsatisfied, especially if its narrative does not interest you. The important thing to keep in mind is the danger of expectations set too high, but its important to recognize the small steps towards a far loftier goal. In short, if you go into this game expecting a new Shock game or a new immersive sim, then you will be disappointed, yet if you accept it as an attempt to take inspiration from those classics in its own direction you may also admire its ambition. Though these words come from a different time and place, they are poetry to describe Spirits of Xanadu: A place where nobody dared to go / the love that we came to know / They call it Xanadu / And now, open your eyes and see / what we have made is real / We are in Xanadu.
3.5/5

If you enjoyed this Spirits of Xanadu review, you're encouraged to discuss it with the author and with other members of the site's community. If you don't already have an HonestGamers account, you can sign up for one in a snap. Thank you for reading!

© 1998-2021 HonestGamers
None of the material contained within this site may be reproduced in any conceivable fashion without permission from the author(s) of said material. This site is not sponsored or endorsed by Nintendo, Sega, Sony, Microsoft, or any other such party. Spirits of Xanadu is a registered trademark of its copyright holder. This site makes no claim to Spirits of Xanadu, its characters, screenshots, artwork, music, or any intellectual property contained within. Opinions expressed on this site do not necessarily represent the opinion of site staff or sponsors. Staff and freelance reviews are typically written based on time spent with a retail review copy or review key for the game that is provided by its publisher.