According to the developer, Crosstown is inspired by a Commodore game called Crossroads. I've not played that game. Since Crossroads isn't even listed in the HonestGamers database, I was initially skeptical of its existence. I actually believed Studio Hunty's heartfelt tale of idolatrous inspiration to be a diabolical lie! Fortunately, I later discovered that Crossroads does exist . . . just not in the form we would normally expect. The program code was printed out in an issue of COMPUTE!'s Gazette, and readers were expected to type it all into their Commodore before they could play.

Fortunately, no such shenanigans are required to run Crosstown. Simply log into Xbox Live, download this Indie title for a mere 400 points, and enjoy a retro action game reminiscent of Wizard of Wor. Gameplay occurs on a fixed screen, in a Pac-Man maze with a lot of walls and a lot of enemies. Equipped with unisex toga and gun, you walk through the maze, drill through walls, and shoot things while collecting valuable Qreds, so as to advance to the next level. Up to three additional friends can join in on the fun to assist in shooting things. Or they could shoot you and steal all of your Qreds. Crosstown's mayor, Piggy, doesn't particularly care who lives or dies. It's not as though he's in any danger. 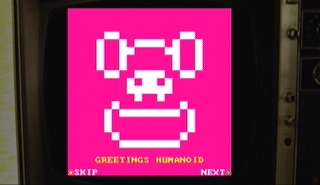 This is Piggy, only bigger.

Piggy will be your narrator through Crosstown, offering a bit of insight before each of the Arcade mode's 40 levels as to how the world works and what new dangers to expect. You'd do well to listen to his advice; not just because it's genuinely useful, but because his quips are highly entertaining. Piggy is funny because the designer  the same fellow who developed In the Pit  is funny.

"While you're welcome to attack anyone you meet in Crosstown, citizens who are the same color as your toga are your friends. Friends won't attack you, and you'll lose points if you attack them. And you wouldn't want to lose points."

"Points are, after all, a numeric expression of your worth as a person."

The tiny enemies are plentiful and it's occasionally difficult to discern one type from another, but keen eyes will watch for tell-tale behaviors such as "eating through walls", "eating other monsters", or "shooting laser beams at your face". Whenever anything dies, it explodes into an impressive cloud of shards. My favorite levels are the ones filled with creatures that HATE EACH OTHER. When a stage begins, it's wise to stand in the corner for a few seconds and let the carnivorous crowd of chaos thin itself out a bit before stepping into the fray. 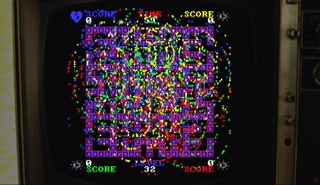 "There are some people who think that Crosstown was originally all walls, and it was the dogdozers who carved out the streets."

"These people are wrong, of course, and most of them have eaten each other."

"Normally I encourage citizens to shoot each other in the back. It's really the most humane form of murder."

"Bouncebacks, however, have hard and rubbery shells on their backs, which will reflect your bullets back at you. If you do have to shoot one in the face, try to at least mumble some sort of apology. It's the polite thing to do."

Crosstown's deep menagerie spawns indefinitely until you've obtained every Qred (thus ending the level). Should you complete a stage without dying, that level can then be skipped on successive playthroughs. Because of this feature, even a shoddy-but-persistent player can experience everything the game has to offer. Everything except the secret "good" ending, that is. The secret ending is reserved for people who can play through all 40 levels without skipping any. Conquer the Arcade mode and then it's onwards to Endless mode which is, as one may suspect, Endless. Call up some local friends and wreak havoc amidst a sea of dogdozers, bouncebacks, and cemanxes  Crosstown is an entertaining way to pass a lazy Sunday afternoon.

I'd rather not tell you what happens to those who don't.


This game cost 400 points at the time of review.

If you enjoyed this Crosstown review, you're encouraged to discuss it with the author and with other members of the site's community. If you don't already have an HonestGamers account, you can sign up for one in a snap. Thank you for reading!