The history of Castlevania has been an interesting one. Throughout the eight- and 16-bit eras, if a game bearing that moniker was released, you often could expect a tough-as-nails two-dimensional platformer where you controlled a dude with a whip who'd battle through all sorts of monsters on his way to confronting Dracula. However, with the PlayStation, a new direction was taken.

Symphony of the Night kept the two dimensions and the platforming, but changed the focus to one of exploration, giving you a massive castle and changing the protagonist to Dracula's estranged son. You'd gradually collect abilities granting you access to new areas of the castle. Meanwhile, the difficulty was dropped significantly, making it a far more relaxing game than its predecessors, as you could explore at your own pace and occasionally find weapons or accessories capable of turning even the toughest adversaries into complete pushovers.

From there, the series embraced the third dimension on consoles and I found myself losing interest around the time I played Lament of Innocence and decided it felt less like Castlevania and more like a half-hearted God of War impersonator. However, the Symphony blueprint wasn't taken out of commission -- it just moved to handheld devices.

The GameBoy Advance received a total of three scaled-down Symphonies, with 2003's Aria of Sorrow being both the last and the best of that number. Not satisfied with being a mere mirror of its inspiration, Aria tinkered with the formula to become something more complex than one would expect of a game that can be beaten in less than 10 hours. 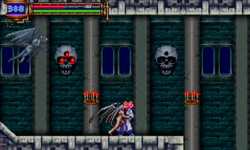 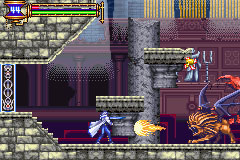 In devising the story, the design team seemingly went the route of psychedelics. Lots and lots of psychedelics. A lad named Soma Cruz visits a shrine with a friend during a solar eclipse and winds up at Dracula's castle, where he meets a motley crew of other people who also found themselves there. As Soma explores the place and does all the requisite killing of monsters and gaining of abilities, he finds out that Dracula and his castle are beings of chaos and Dracula isn't just a man, man; he's a state of mind and his soul can be passed down to those deemed worthy. Graham, one of those other people stuck in the castle, is convinced he's the dude about to inherit all the vampiric goodness. However, Soma's the one who is the protagonist, so, yeah, good luck with that, buddy.

As far as gameplay goes, the basic framework of Symphony is still intact. Soma will explore a large castle divided into numerous sections. Castlevania's beloved Clock Tower is there, of course, as well as underground waterways, vast chambers, an arena and all sorts of other places littered with secrets. Many of those secrets involve new weapons, armor and accessories for him to equip. The combination of those and the levels gained from hacking his way through the hordes of monsters inhabiting the castle gradually transform Soma from a weakling into a powerhouse.

The biggest alteration to that framework comes from killing those monsters. Occasionally, Soma will absorb the souls of his prey -- a mechanic that works as the cornerstone of Aria. You'll get introduced to this almost as soon as you've started playing. Soma will best a weak Winged Skeleton enemy and instantly gain its soul, which allows him to use a bit of magic to fire a spear at foes. Throughout the rest of the game, he'll regularly gain more and more of those souls.

A few of them are found in rooms and typically are rewards for defeating bosses. Odds are they're there to fill specific purpose that's an integral element of any game given the "metroidvania" title -- to give Soma an ability needed to access parts of the castle he couldn't previously reach. Others follow the example of Mr. Winged Skeleton and grant him various attacks, while a few also give passive boosts or enhance his stats. Oh, and you'll also need to possess three specific ones and have them equipped during the apparent final boss fight in order to keep the game running past that point and allowing you to access the true big baddie and the game's best ending. At least the game hints at this and there are a handful of books found in out-of-the-way places which give clues as to which souls you need, but still

Another deviation from Symphony of the Night lies in the simple fact that this game actually has a certain amount of difficulty. It's not a brutally difficult old-school Castlevania and you likely won't feel like going from one save room to the next is akin to a death march, but there are a few moments in this game with the potential to become brick walls you'll have to bounce your head against until something breaks. 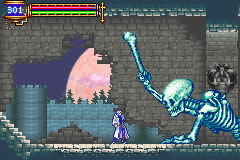 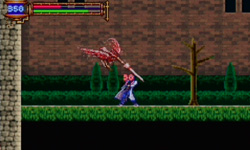 My personal moment of humility was provided by series staple Death. After the game's first boss was so pathetic it elicited a strange mixture of pity and contempt from me and the next few all resided firmly in that broad category where a person does have to pay attention and might even have to expend a healing item, but probably can get through without much stress, I was not prepared for a two-part battle against a durable foe possessing a number of quite damaging attacks that can at times be difficult to avoid. I was stalled at his chamber for a good amount of time, with my main saving grace being the combination of this game regularly placing save rooms next to boss rooms and there being some good enemies to battle nearby in order to grind levels. One of those foes, a giant suit of armor, even was kind enough to eventually drop a couple pieces of equipment which proved beneficial in boosting my stats enough to get past the grim reaper. Eventually. It also probably didn't help matters that Death resides at the top of the Clock Tower, which was a fair bit trickier to navigate than previous areas of the castle.

Things got better after that, although bosses still were challenging more often than not, with the penultimate foe on the path to the good ending being a real pain to get past. Part of that probably had to do with the levels I gained before finally toppling Death, but a lot of the credit also should be given to how powerful Soma can become in the hands of a gamer willing to explore every nook and cranny of the castle. There are some great weapons, including a massive and super-powerful sword that can cover an amazing amount of territory with its swings, ripe for the picking if you're not averse to retreading old ground whenever you gain a new ability.

Aria of Sorrow is a worthy handheld successor to Symphony of the Night, even if it isn't perfect. It's a quite short game. If you're familiar with Symphony, you'll find this one reaching its conclusion right about the time you'll be expecting to hit the midway point. While the soul-collecting aspect is really neat and gives you a plethora of ways to customize Soma, Aria still feels similar enough to its inspiration to be more an altered take upon it than an original creation, leading to me having a vague feeling of diminished returns. I enjoyed playing this game and doing all those fun "metroidvania" things like exploring a large castle, acquiring useful items and equipment hidden off the beaten path and finding ways to reach previously inaccessible places. However, nostalgia is a powerful drug and this one didn't captivate my imagination the way Symphony did when I first experienced it. It was a quite fun game, but there was a bit too much of a "been there, done that" vibe for me to feel like I'd want to replay it from time to time.

© 1998-2021 HonestGamers
None of the material contained within this site may be reproduced in any conceivable fashion without permission from the author(s) of said material. This site is not sponsored or endorsed by Nintendo, Sega, Sony, Microsoft, or any other such party. Castlevania: Aria of Sorrow is a registered trademark of its copyright holder. This site makes no claim to Castlevania: Aria of Sorrow, its characters, screenshots, artwork, music, or any intellectual property contained within. Opinions expressed on this site do not necessarily represent the opinion of site staff or sponsors. Staff and freelance reviews are typically written based on time spent with a retail review copy or review key for the game that is provided by its publisher.