Kingdom Rush Frontiers is the second entry in a now-classic series of tower defense games. I played the initial title near its release in 2011, and I decided I was ready for a return to the franchise when I saw this one offered on the eShop. Priced at $14.99, the entry fee felt a bit on the steep side, but I knew I was in for a good time and I had a cooperative eShop balance at my disposal.

Developed by Ironhide Game Studios, the game tells (occasionally with cute little images that look like they were torn from a comic book) a generic story about heroes facing off against great evil as they roam a tropical kingdom. Individual stages, which you can select from a world map, advance the meager plot even when there aren't visual renderings, and the narrative side of things is adequate but unremarkable. 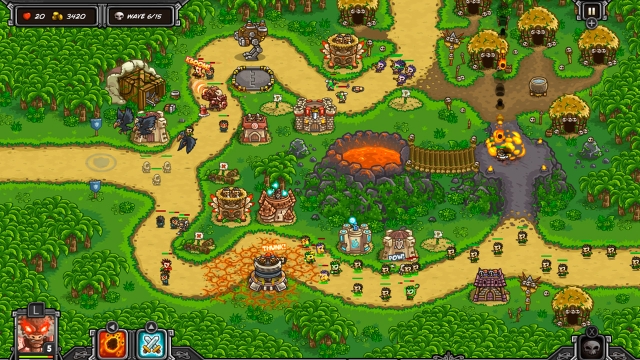 Individual stages begin by introducing the various towers you will use for the campaign's remainder to defend your base (or bases, in some exasperating later stages). Enemies issue forth from various points along the sides or top of the screen and doggedly attempt to navigate your gauntlet, even as you wipe them out and use the coins they drop to make further improvements. If too many baddies manage to get through your structures, you lose. Otherwise, you receive a rating from 1 to 3 stars for that particular area and you can use those stars to make more permanent improvements that positively impact things like individual tower cost, attack power and range.

One feature that makes Kingdom Rush Frontiers different from some other games in the genre is that (perhaps owing to its mobile roots) everything takes place on a single screen. You don't have to scroll to see all of the map, which is much appreciated. Another difference is that you quickly gain access to upgrade trees for each of your towers, which let you employ an array of techniques to stump your invading foes. As an example, the dwarven artillery towers can become a compress that sends shockwaves through the area, slowing enemies and damaging them. Later, you can instead modify that same base tower to fashion a workshop that produces a single giant mech. Once fully upgraded, it roams the area near its point of origin, regularly firing homing missiles and laying down oil slicks.

Besides managing your towers, you control one or sometimes two heroes, drawn from what becomes a fairly large roster. These helpful souls gain levels through repeated use, which grant you access to a variety of skills. You can move them around the map to ensure they are positioned effectively, and they might rob defeated enemies or heal your other units or do all sorts of neat things your adversaries won't appreciate. It's fun to experiment and find one that especially suits your particular play style. I'm partial to a zombie dragon that summons bone creatures to guard the trail below him as he takes to the skies and rains down magical ruin, or sends out jets of green flame that snake along pathways and eliminate whole enemy squads at once. 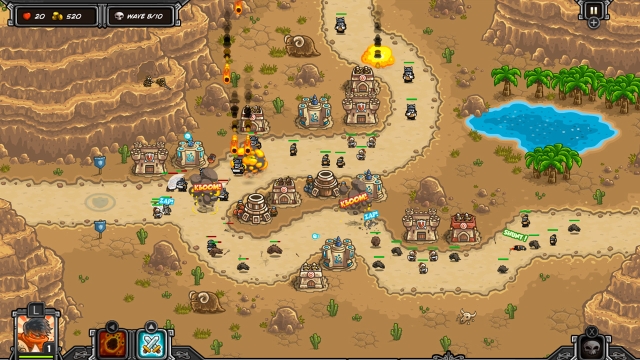 I was surprised sometimes by how creative enemies get about their approach. There are dozens of enemy unit types to best over the course of your adventure. You'll face rabid dogs, giant spiders, burrowing scorpions, savage jungle people and more. Some of those units can teleport, or temporarily disable your towers or block your view with thunderclouds. Others are impervious to one type of armament or can shrug it off without seeming to feel anything. Besides coming from the expected avenues, they might chop down trees from the side of the map to fashion themselves a new trail, or crawl out of huts or even scale the face of a cliff you probably thought was completely benign the first time you saw it.

Maps are teeming with life, and not just courtesy of your adversaries. You'll see birds flying over the trees, or special characters you can interact with if you play your cards right. For instance, a member of one particularly nasty tribe grabs a princess and marches her toward a lake of lava. If you destroy him in time, you save her life; if not, the volcano god to which she was sacrificed will rain down fire and brimstone on your hero, perhaps disabling him or her long enough to give the enemy forces an insurmountable advantage.

I played the previous Kingdom Rush game on my iPad, but I was happy to play its sequel on my television screen even though that meant giving up responsive touchscreen controls. To my delight, I was still able to manage everything pretty well. There's a cursor to move around and sometimes its progress can be jerky and imprecise, but it's still manageable. Heroes and special attack abilities are mapped to the d-pad and shoulder buttons (I played using a Pro Controller), and I experienced only minor, infrequent difficulty getting everything to work as expected despite the game's sometimes fast-paced nature. 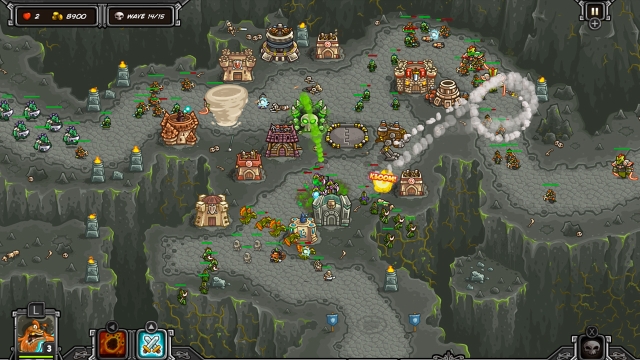 Your experience with Kingdom Rush Frontiers may differ quite a lot from mine, but I found the difficulty level felt just a bit on the high side much of the time on the default setting. Securing a three-star rating is difficult even on some of the earlier stages, and that feat doesn't get much easier even when you return later with improved stats (in part because the special tower modifications you will have probably grown accustomed to using on late maps may be unavailable). Enemy waves are really good at overwhelming a player, particularly in a new stage when it might not be obvious what events will occur in those later moments. This can be frustrating, since a given attempt might take the better part of 15 minutes and then fall apart right near the very end, forcing you to start over from the first wave because you fell victim to a surprise you couldn't have anticipated. There's no way to fast-forward things, either, at least that I noticed.

Fortunately, it's possible to lower the difficulty if your ego can withstand that blow. Since I have done well in a lot of tower defense games, I went with the default setting at first. I got around 10 stages in before getting stuck on a map that proved frustrating enough I finally decided to drop the difficulty rating. For whatever reason, though, I couldn't seem to get that adjustment to take (even though you're supposed to be able to do so on the fly). That failure by itself wasn't so bad, but my hero upgrades also didn't stick. I had leveled up my hero several times, and assigned wicked, but he still used his default--and fairly weak--attacks to tickle swarms of spiders. It's a wonder I cleared the stage at all. The next level I entered reflected the "beginner" difficulty setting and suddenly that same hero laid waste to all foes that came his way, so it seems I somehow encountered a glitch.

Despite the few rough spots I encountered, however, I mostly had the anticipated great time playing Kingdom Rush Frontiers. The campaign lasts a few dozen stages, and they are vibrant stages that make for a meaty experience even if you manage to stomp all over them on your first attempt... which I don't think you will. There are post-credits challenges and harder difficulty settings on offer, along with a slew of Easter eggs to find and appreciate (with many of them helpfully highlighted as in-game Achievements). Stages are also designed carefully enough to support multiple solutions that give you reason to play through them a second time. All things considered, the game holds up remarkably well as a package that made its debut in 2013. I can only hope Ironhide Game Studio sees fit to revisit subsequent installments on Switch, or even makes an all-new one.
4/5

If you enjoyed this Kingdom Rush Frontiers review, you're encouraged to discuss it with the author and with other members of the site's community. If you don't already have an HonestGamers account, you can sign up for one in a snap. Thank you for reading!

© 1998-2020 HonestGamers
None of the material contained within this site may be reproduced in any conceivable fashion without permission from the author(s) of said material. This site is not sponsored or endorsed by Nintendo, Sega, Sony, Microsoft, or any other such party. Kingdom Rush Frontiers is a registered trademark of its copyright holder. This site makes no claim to Kingdom Rush Frontiers, its characters, screenshots, artwork, music, or any intellectual property contained within. Opinions expressed on this site do not necessarily represent the opinion of site staff or sponsors. Staff and freelance reviews are typically written based on time spent with a retail review copy or review key for the game that is provided by its publisher.