The Fate series of visual novels hasn't yet been localized, but the anime series has, and so have a number of spin-off games. The latest of those to reach North America, Fate/Extella: The Umbral Star, is Marvelous Games' take on the now-classic Dynasty Warriors formula. Though the game is fun overall, it relies too heavily on a single mechanic and that leads to tedium.

Before I go any further, I should mention that Fate/Extella lacks a lexicon. That doesn't help out franchise newcomers, so a summary is in order... 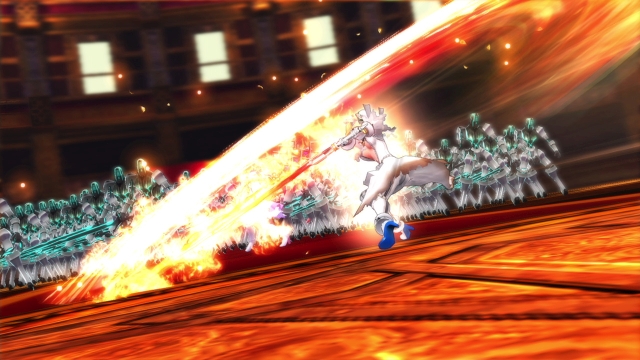 There exist in the world magi, known as Masters, who can summon the spirits of great figures from human history and place them within a new physical form. The resulting entities are known as Servants. Their physical form may not match the gender they used to have (this is how King Arthur and Nero can both have a similar body type in their new form, which is female). Trapped in new bodies, these warriors from bygone eras now fight each other at the behest of the Magi, all in order to win the Holy Grail that can grant any wish. Got all of that? Good.

The game does drip feed some of the above info as you play, but it doesn't go into great detail. It also expects players to have played both Fate/Extra and Fate/Extra CCC, the latter of which was only released on the PSP in Japan, after that handheld's market in the West had closed. Extella continues the plot the previous title started, picking up with the events that followed the Holy Grail War. Apparently, it was fought on the moon and in cyberspace.

In this instance, the Grail is a program that makes all of those strange occurrences possible. The Servants are battling over territories. You start out by playing as Nero Claudius, the Saber from Fate/Extra, while she works to completely wrest control of the Moon Core from Tamamo no Mae, a Caster-type Servant. Your current Master is suffering from amnesia, after their soul was separated from their mind during an event that also caused the Regalia to split (the Regalia, by the way, is a ring that proves one has authority as king of the Moon Core). 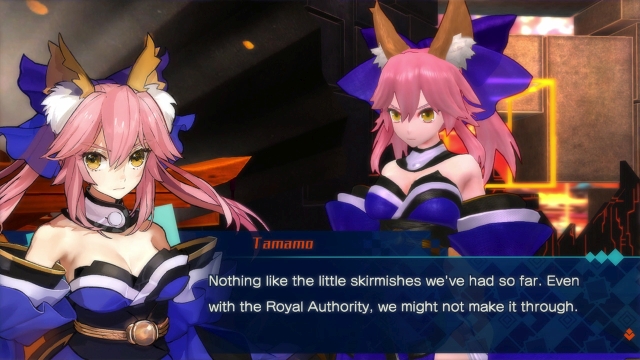 Gaining control of the Moon Core won't be easy, especially since another Servant named Elizabeth Bathory has also set her sights on it. The three fractions each have their own arc within the game, and completing all of them opens up the final arc, where you play as the Saber from Fate/Stay Night and Zero, Arturia. Her goal is to stop all of the pointless fighting and bring everyone back to reality.

That's the basic plot in a nutshell, not counting scenes in the visual novel segments you can tackle if you're in the mood for some good jokes and dating symbols. Doing so also improves your Bond Level, which unlocks additional nodes for your Servant and awards passive boosts such as improved attack power and elemental strikes. If you link certain colors together, you further enhance their impact. You can also use currency earned in battle to make new Code Casts, which let you utilize various items in battle (thus opening up the ability to heal, or to cure status ailments).

As noted above, the game mostly plays like a Dyansty Warriors title. There are heavy and light attacks you can combo together, along with dashes and air dashes. There's also the Extella Maneuver, which stands in for Musou attacks you might recall from that other franchise. The Extella Maneuver clears the screen of many enemies, if you complete a really basic QTE sequence. There also is a gauge for your Noble Phantasm, which allows you to transform and greatly increase your combat ability. You charge it by racking up combos, and you also need to find all three fragments within a level to make the best of it. 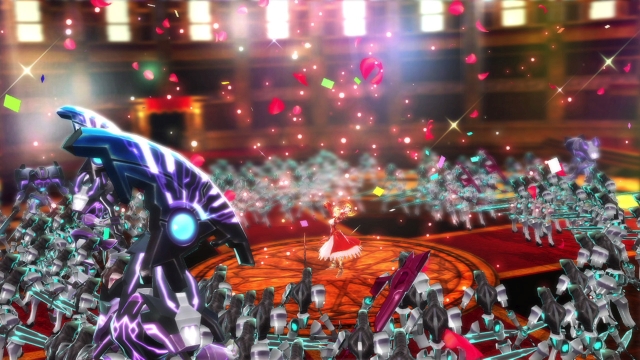 Another aspect of combat you may recognize from the Warriors games is the Morale System, now called the Area Supremacy Battle System. You must earn fifteen Regime Keys by conquering areas the enemies control, all while defending previously claimed territory from advancing invaders. You also have to deal with Plants that spawn additional Aggressors, which are the game's version of Officers. Once you obtain the required keys, you fight the boss. This pattern repeats regularly throughout most of the game.

Unfortunately, the above setup is relied upon too heavily. It makes the game feel less intuitive than Omega Force's Warriors series. The constant focus on the tug-of-war system quickly gets tedious because managing territories is also more difficult than it was in the other franchise. Just getting from one sector to another proves challenging, even though you can ride data streams between the various nodes. At least you can spend time training in Free Battle mode, or by replaying previous stages. And Side Story mode is an option, if you want to play as one of the other Servants.

Those side stories don't offer much in the way of meaningful supplemental material, alas. You basically just replay familiar story missions, but this time as different characters. The dialogue alterations don't justify the repetition. The primary benefit is that you can level up servants you might use in other story missions, but you have to equip a custom code to make the switch. You also need to know which characters you'll use beforehand, since the game doesn't let you pick. And yet, in spite of such overbearing systems, the game still manages to provide a good time. There is a lot of replayability, and the dialogue during visual novel segments is genuinely amusing. 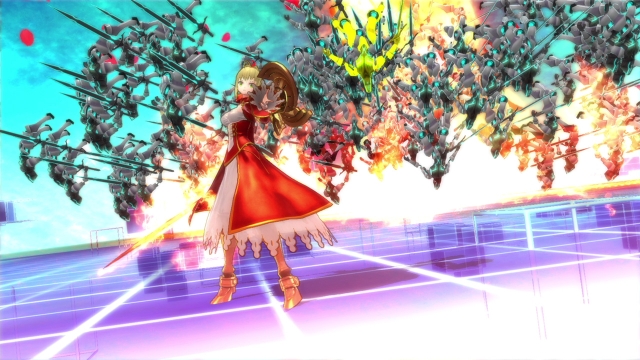 Fate/Extella: The Umbral Star on the Switch is a port of a Vita title, and it does perform better than the initial edition. The frame rate is still locked at 30 fps, but at least it's a solid 30 frames. There's not much in the way of textures, so the game looks better in portable mode than it does on a large television set. One other positive worth mentioning is the inclusion of all of the DLC that has been released, which means you don't have to worry about looking for it later. Aurally, the game benefits from decent music. However, the voice acting is Japanese only. That's kind of a shame, since Fate/Stay Night, Fate/Zero, and Fate/Unlimited Blade Works anime all have English dubs available.

The main thing that might make potential purchasers hold back is the game's price tag. The Switch version has an MSRP of $60 USD at launch, while the PlayStation 4 version has been available for around $20 less for some time now. Switch carts are apparently pricey, so perhaps the difference should be expected. The question you have to answer for yourself is whether the ability to play the game on the go (with a lower frame rate) is worth the higher sticker price. Either way, Fate fans can expect a decent experience from Fate/Extella: The Umbral Star. They just have to be aware it delivers some foibles along the way.
3/5

If you enjoyed this Fate/Extella: The Umbral Star review, you're encouraged to discuss it with the author and with other members of the site's community. If you don't already have an HonestGamers account, you can sign up for one in a snap. Thank you for reading!

© 1998-2021 HonestGamers
None of the material contained within this site may be reproduced in any conceivable fashion without permission from the author(s) of said material. This site is not sponsored or endorsed by Nintendo, Sega, Sony, Microsoft, or any other such party. Fate/Extella: The Umbral Star is a registered trademark of its copyright holder. This site makes no claim to Fate/Extella: The Umbral Star, its characters, screenshots, artwork, music, or any intellectual property contained within. Opinions expressed on this site do not necessarily represent the opinion of site staff or sponsors. Staff and freelance reviews are typically written based on time spent with a retail review copy or review key for the game that is provided by its publisher.