Dungeons of Naheulbeuk cant be accused of taking a lot seriously, but it absolutely refuses to make a mockery of its D&D foundations. Sure, all the expected tropes and stereotypes are mercilessly scorned with ditzy airhead elf archers sharing a hate/hate relationship with selfish, materialistic dwarves, but it has no issue putting all that aside when it matters. For a satirical game, its combat is no joke; turn-based squad battles with X-Com-like hit percentages tapered by dodge stats and environment hazards. Magic attacks grounded by intelligence stats with percentile chances of status effect triggers like poison or ablaze. You can set up chains of attacks that string into epic combos. Maybe if you hit that orc warrior with the barbarians special attack, it will proc fear, wherein the orc will hightail it away from any current threats. However, in his panicked escape attempt, maybe hes broken ground next to the ogre, which will trigger his attack of opportunity, giving him a free swing at his fleeing foe. Or, maybe the rangers been set to overwatch, letting him ping an arrow into his retreating form. Or, maybe the nefarious thief has set up an ice patch the hapless orc has sprinted into, failed a stability check and ended up flat on his arse, prone to all manner of elevated attacks until hes able to pull himself to his feet. Maybe all of these! But, also, maybe none of them. Maybe the barbarian failed his virtual dice roll and ended up missing the orc entirely, muttering to himself while the rest of his party ruthlessly mock his ineptitude.

Theres equipment to be won in battle or looted from chests, difficult choices to be made on whether youd be better off with that silver ring that refreshes 2HP every turn, or the stone one that increases your melee defence. Theres experience to be farmed, stats to be bolstered, skills to learn. And while some of these skills might lean towards the ridiculous, their effects do not. It would be easy to point at the ogres belch skill and claim toilet humour, but its an AoE attack that hits anyone in close proximity and offers a high chance to stun. The elfs ability to blow kisses to the frontline from cover may seem dumb, but its a ranged heal that can give back some serious HP if her charisma stats has been well maintained. The thief has hen bombs, which are exactly what they sound like. It seems a worthless waste of a turn, but lobbing a quintet of furious, lightly-singed hens into an enemy backline could cause chaos. They can interrupt mages channelling high-powered spells, or annul archers posted on overwatch, or just get under the feet of advancing brawlers. 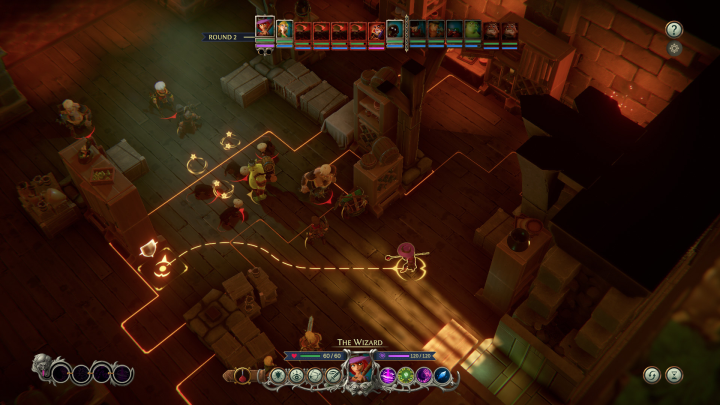 Juxtaposed to that is the frivolousness and deriding world of Dungeons of Naheulbeuk, lifted right from an parody audio series that takes aim at all the genre tropes. To that end, the story revolves around a first time adventuring party taking on what they believe to be a never before explored dungeon crawl in order to retrieve the statue of a god that none of them can pronounce. It doesnt go particularly smoothly. Theyve barely started exploring before they come across a huge magical lock far beyond their meagre understanding, so they elect to wallop it. This doesnt work, but it does scatter the party throughout the first floor of the dungeon, forcing the now solitary ranger to track them all down. The elfs been locked in the toilet, much to the chagrin of the desperate orc eagerly waiting outside. A distressed and distracted orc is an easy victory, even for the rookie ranger, but this doesnt stop him bragging that it was a horde of hardened warriors he rescued the elf from rather than one poor sap trying not to crap himself. The thiefs found cowering in the shadows. Hed much rather stay there. The ogres been locked in the pantry. Hed much rather stay there.

As standalone subjects, such heavy-handed gags might contain an unhealthy amount of cringe, but Dungeons of Naheulbeuk commits hard to its shtick and that commitment pays off. While theres plenty of winking at the cameras and light threatening of the fourth wall, because the world around the bumbling party is treated so respectfully, the humour is often found in the stupidity of their actions and the knee-jerk reactions in trying to right their errors. Theyre cursed early on because they take part in a random spin-the-wheel gameshow hosted by goblins that couldnt be a more obvious trap. Even after knowing a golden amulet gained from it is magical and untrustworthy, the party is forced to take stock of it anyway thanks to the dwarf because gold. Then they fight a drag out battle among the ticker tape and gaudy banners against goblin blunderbuss snipers and greenskin assassins, where if they dont win the battle quick enough reinforcements shuffle on from stage left to join the fray. 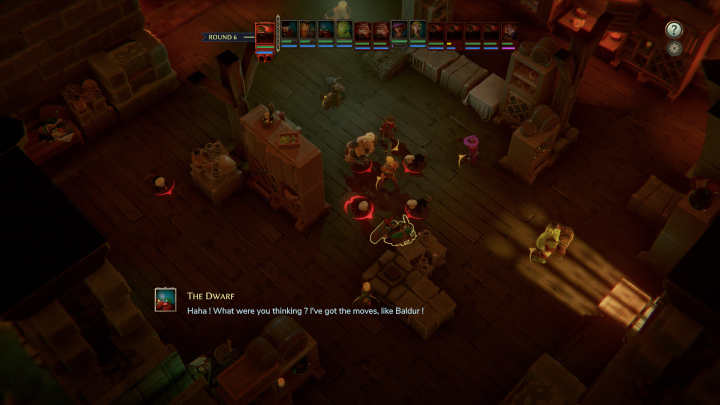 Dungeons of Naheulbeuk is silly, occasionally to the point of frustration, which is not the same as saying that its stupid. At the end of the 20-or-so hour campaign, youll have been party to some vicious battles, some of them not against demon-powered poultry. Youll have explored a multi-floored dungeon, and been told off on every one by the poor janitor who has to clean up the constant mess of chaos dwarf livers and cave spider limbs you leave in your wake. Youll steal cheese for wizards, youll search for haunted plumbing accessories and youll rescue a barbarians pet hamster from kidnaping rats. Kidrattors, they should have called them. Missed a trick there.
4/5

If you enjoyed this The Dungeon Of Naheulbeuk: The Amulet Of Chaos review, you're encouraged to discuss it with the author and with other members of the site's community. If you don't already have an HonestGamers account, you can sign up for one in a snap. Thank you for reading!

© 1998-2021 HonestGamers
None of the material contained within this site may be reproduced in any conceivable fashion without permission from the author(s) of said material. This site is not sponsored or endorsed by Nintendo, Sega, Sony, Microsoft, or any other such party. The Dungeon Of Naheulbeuk: The Amulet Of Chaos is a registered trademark of its copyright holder. This site makes no claim to The Dungeon Of Naheulbeuk: The Amulet Of Chaos, its characters, screenshots, artwork, music, or any intellectual property contained within. Opinions expressed on this site do not necessarily represent the opinion of site staff or sponsors. Staff and freelance reviews are typically written based on time spent with a retail review copy or review key for the game that is provided by its publisher.