Loop Hero starts with the end of the world. This has come as a great surprise and disappointment to the scattered survivors, who are reasonably sure that existence used to, well, exist at some point. Its removal is a considerable inconvenience to them. They can kind of remember the world that was, but not really; they just know the endless void that has become their reality shouldnt be as empty as it is. There should be things. Sure, if pressed, they couldnt tell you what those things were, but there was certainly something out there occupying all that nothing. Wasnt there?

Now theres these random tracks of wasteland, constantly shifting and changing shape for reasons that are beyond you. Oblivion doesnt stop to explain itself, after all. At first, exploring seems kind of pointless; nothingness is well known for being full of nothing. But theres things out there, if you know where to look. Its pretty slim pickings to begin with, but the void will occasionally belch out some amoebic slime creatures. Theyre not particularly impressive, but destroying them can gift you a sliver of the forgotten world. Perhaps a scrap of armour or broken weapon to harden yourself with. Perhaps an elapsed landmark, something innocuous like a segment of meadow. Or something less lackadaisical, like a stack of webbed cocoons. You can use these fragments of what was to slowly fill in the oppressive darkness, even if the cocoons give birth to humongous spiders that earnestly try to devour you. The more you explore, the more battles you win, the more of the old world you are able to reclaim, if only fleetingly. Slowly, you can start to reject oblivion by designing your own mimicry of a reality you dont really recall. The magical skeleton that lives in the sky does not care for that; continue to reject your nonexistence, and hell be forced to confront you directly.

Itll probably be a while before you can coax the lich from the heavens so he can lecture you on why your stubborn existence is really problematic. Thats not ideal. Maybe you were able to battle a literal destroyer of worlds pre-cataclysm, but now youre just some wide-eyed vagabond wandering around in circles, being struck completely dumbfounded every time you remember what a tree used to be. You need to be stronger, but thats no easy task when you periodically forget any progress you make. Free through you are to design the world around you with whatever hard-won spoils youre able to retain, the world will forget the second you leave it. It only exists while you exist within it. Every weapon youve found, every forest youve built, every skill youve learnt unapologetically evaporates into nonentity the second you turn your back on it. But that doesn't mean you leave with nothing. 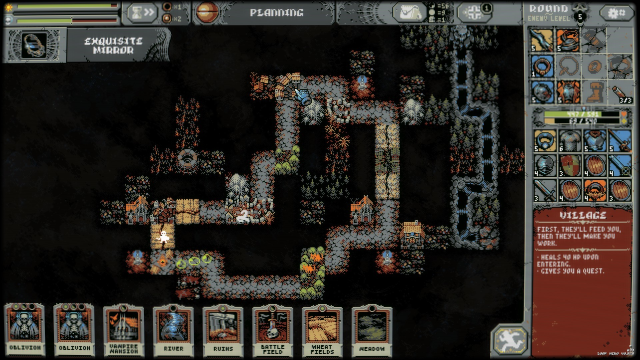 Either by retreating or by getting killed by one of the you-created monstrosities that roam the non-world, you find yourself back at a razed campsite of sorts, populated by people just as confused at the lack of things as you are. Only, theyre not ready to venture out into the wasteland like you. I mean, why would they? Theres a bloody magical skeleton floating up in the sky that looks like hes getting progressively more annoyed at you. They may not be able to remember much, but surely thats not right? Theres not a lot going on at the camp; a pathetic campfire, and the depressing piles of rags that constitute someone's home. Theyre not certain, but they think theyre forgetting people more and more each day, their extinction marked only by a well-worn bed no one could ever remember being occupied, or an unclaimed food ration gone uneaten. You can change that.

Maybe because people constantly exist within the campsite, its not as susceptible to being suddenly deleted as the outside world is. Eventually, using resources that are initially farmed in the flux world by accident, you can improve the camp and, therefore, improve your lot. You can fortify your base stats by building training grounds, for example, or provide a small cache of healing potions by constructing a herbalist hut. Deliberately, you come to understand how the resources once stumbled upon can be competently farmed, and your journeys into the void suddenly have a reason behind them. You know what you need to do to finally finish construction of the farm, or how to go about building a mud hut to try and improve the living quality of your fellow survivors. The entire population of the camp becomes your support network; its you that braves the wastelands, but with every little corner of the camp you build, it means a tiny slice of the world has been resurrected.

You remember more of what was. The options you have to fill in the gaps of the void swell. You can paint a more complete picture. You can discover new things. One day, you remember what rocks were and you have a faint recollection of massive mountains, which you can rebuild from scratch with the right combination of items. One day, you remember what a village was, and you finally have a fleeting place in the darkness where you might feel momentarily safe. Only, it also reminds other survivors that they used to be the bandits who would ransack these villages, and they resort to type. They dont remember how to be anything else. 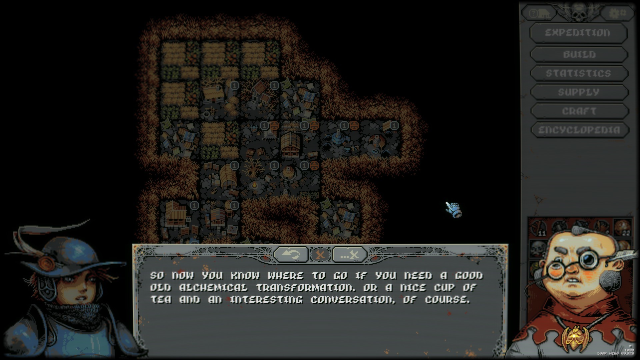 You grow, the world grows, and eyeless skull sockets bore an annoyed glare at you from the heavens. Your reluctance to embrace the annulment of existence finally tempts the lich from his throne atop the horizon, and you learn hes just as befuddled as you. This isnt how the End of Days should go. Youre an anomaly that simply shouldnt be and bear correcting. Maybe youve done enough; theres always a chance you can rewrite fate and strike down the gods. And if not? Youre at least a little bit closer to that ideal. Another loop awaits.
4.5/5

If you enjoyed this Loop Hero review, you're encouraged to discuss it with the author and with other members of the site's community. If you don't already have an HonestGamers account, you can sign up for one in a snap. Thank you for reading!

© 1998-2021 HonestGamers
None of the material contained within this site may be reproduced in any conceivable fashion without permission from the author(s) of said material. This site is not sponsored or endorsed by Nintendo, Sega, Sony, Microsoft, or any other such party. Loop Hero is a registered trademark of its copyright holder. This site makes no claim to Loop Hero, its characters, screenshots, artwork, music, or any intellectual property contained within. Opinions expressed on this site do not necessarily represent the opinion of site staff or sponsors. Staff and freelance reviews are typically written based on time spent with a retail review copy or review key for the game that is provided by its publisher.