In an sadly ironic twist, Final Form games was unable to help its own beloved creation reach its final form, and Jamestown required the assistance of Batterystaplegames of 20XX fame to run the final stretch of this relay, to bring home this ultimate evolution, this Jamestown + -- for us top-down shoot-em-up lovers to marvel at and enjoy.

Even if you dont follow the shmup genre, you may have heard something of this idiosyncratic bullet-hell-for-everyone (literally everyone -- three friends can join you through Remote Play!): wherein war is waged for British colonial Mars, in a tale both outlandish and riveting in equal measure; a tale from which distinct design elements arose to make people take notice, which in and of itself is an impressive feat for a shooter narrative. Throw in the rousing soundtrack and instant accessibility and an indie project becomes a cult classic.

And so, Jamestown + is the best version of one of the best shooters of this generation. If you're an aficionado, and you haven't played it, then this updated iteration is just about the easiest recommendation I could ever make. A much trickier contemplation involves the fact that the original game came out nearly a decade ago already, and those who experienced it might look upon this version as no more than a glorified DLC. After all, were provided two new levels (bringing the total to seven from five), a new leg of challenges, a bunch of extra ships to tinker with, an improved interface, and an all new (easier) achievement list.

Lets make it simple, then: if you already have Jamestown, and you liked it, but didn't love it (blasphemy!), keep it moving. This more complete version is absolutely not worth your money. But if you loved Jamestown when it dropped in 2011, you've been starved for your fix, and perhaps even found yourself angry that the + update was released for PS4 years ago and not your Steam or Switch platform well then, what are you waiting for? The extras are well worth the price of admission if theres love in your shmuppers heart. 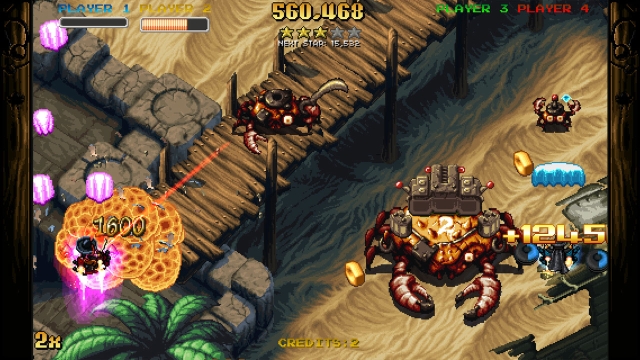 The core gameplay is as simple and brilliant as ever. Eradicate enemy craft with focused beams or feebler spreads; build your vaunt meter by collecting the gold coins the dead drop. A full vaunt meter presents a stylistic dilemma: activate vaunt and enjoy the momentary safety of a temporary shield and the relentless offense as your ship goes into a sort of overdrive, maintained as long as you keep collecting coins. When you're more seasoned and confident, wreaking havoc and score building will be what you're after; but when you're a newbie, you'll want to save that vaunt for the precious oasis that the temporary shield will bring.

Either way, you'll need to fight your way through a uniquely realized world -- not comic bookish, not steampunk, certainly not anime -- but something completely different. Jamestown + offers its five very different stages, each closed out with a formidable guardian who will be responsible for an eye-glazing tapestry of bright enemy bullets for you to navigate. Beat those five, and see the ending, then beat the two new levels to reveal a completely different epilogue. In keeping with modern shooter trends, the story is treated like a proper campaign, as progress is saved on beating each stage. You're also afforded two continues per stage, which is a lot. That said, you won't be able to drop the difficulty to rock bottom and just cruise to the credits; while you can play the first three worlds on any difficulty, later stages will require you to beat that introductory trio on harder difficulties to unlock them. You dont get to sniff world four until youve beaten one to three on the third difficulty tier, and so on.

Yes, this means a lot of replay. But the levels are so well designed, so gorgeous, and the score so triumphant, that you will fully commit to the learning process. It's true that you could play through each level on the lowest qualifying difficulty and struggle to two-credit your way through each, and earn a sort of hard scrabble progress to the end. But it's also true that it's very difficult to treat Jamestown + like a disposable shooter experience. Its quality will demand that you do better -- that you move on from the regular 'saved progress campaign' mode to The Gauntlet, which is the game's badass nomenclature for requiring you to play it the way shooters used to be played: from start to finish with limited credits and no progress saved. 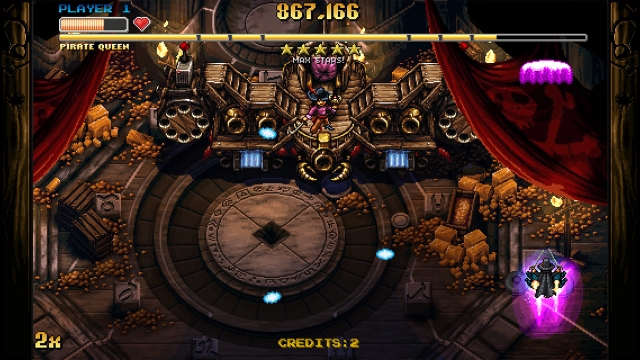 Beyond the intensity of even The Gauntlet, championed by what must be the most stirring main menu music in a game ever, a big part of what made Jamestown great were the challenges -- which remind me very much of the Spec Ops levels from Call of Duty: Modern Warfare -- and there is an additional tier of them to unlock here. The missions usually follow one of three approaches: stay alive in the face of chaos for a prescribed time; rack up a minimum high score against the clock; penetrate an impenetrable enemy gauntlet. This mode is challenging and addictive and may well far outlast the story modes for sustained playability.

But if we're taking about the addition to the original which is most quantifiably substantial, that's the ship count. The original four are here, including the standard beam, but another eight(!) have joined them, of which one group offers significant customization, allowing for mix-and-matching of primary shot configuration and secondary weapons. There is a loadout for every play style. And given the exacting demands of some of the challenges, youll want to sample and get accustomed to different ships, as you look to see which is most suited to overcoming that challenge.

All told, when boiled down, Jamestown + is a small collection of levels, strung together evilly for The Gauntlet, remixed diabolically for the challenges, and that's... about it. Objectively, and realistically, despite all the new additions, there's not a whole lot here, and there never was. And yet, there's a wholly generous experience on offer here. There's so much to learn, the curve is always gentle, the enemy forces never are. The game punishes you fairly and consistently, but never overwhelmingly, nor before you are ready; it punishes you with a smile, helps you up, invites you to have another go at all its polished variations, its theme song thundering an anthem to your persistence.
5/5

If you enjoyed this Jamestown+ review, you're encouraged to discuss it with the author and with other members of the site's community. If you don't already have an HonestGamers account, you can sign up for one in a snap. Thank you for reading!

© 1998-2020 HonestGamers
None of the material contained within this site may be reproduced in any conceivable fashion without permission from the author(s) of said material. This site is not sponsored or endorsed by Nintendo, Sega, Sony, Microsoft, or any other such party. Jamestown+ is a registered trademark of its copyright holder. This site makes no claim to Jamestown+, its characters, screenshots, artwork, music, or any intellectual property contained within. Opinions expressed on this site do not necessarily represent the opinion of site staff or sponsors. Staff and freelance reviews are typically written based on time spent with a retail review copy or review key for the game that is provided by its publisher.