The Game is a 4v1 asymmetrical online title making use of, as you guessed, the Evil Dead license. If you know nothing about the franchise, it centers around the miserable, yet entertaining, exploits of everyman Ashley J. Williams, spanning several movies and later a three season-long TV show. In these stories, Ash and company do battle against Deadites, demonic beings which can possess the living, who were unfortunately summoned by the book of the dead, the Necronomicon. The Game serves as an amalgamation of the aforementioned properties, dropping players into various settings, mostly rural towns and forests, clashing the brave living against the dreadful dead.

If you decide to play as one of the living, called Survivors in-game, you and three others must carry out the objective of banishing evil. You do this by picking up five important items placed in random spots in a huge environment and, to add urgency, this must be accomplished within a 30 minute time limit. When each match starts, most of the characters you select start with nothing but their bare fists, meaning you have to scour for weapons, health, and one-time in-match upgrades hidden in crates that make you stronger. To top it off, players don't usually spawn beside one another in the beginning, so there's a risk of getting overwhelmed by aggressive AI-humans, possessed by the power of Deadites, given the wrong scenario or miscalculation. 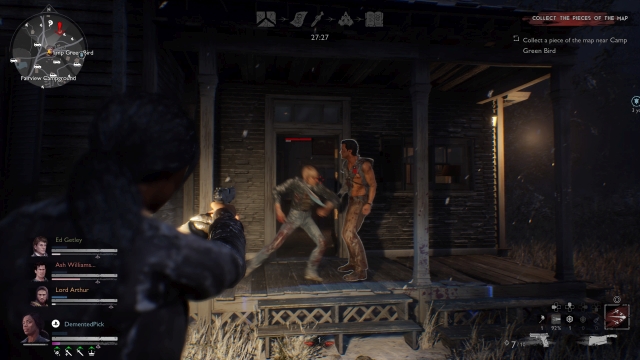 As Survivors run around and ransack, The Game stays faithful to its source material. The most significant of this is the original actor, Bruce Campbell, lending his voice to all incarnations of Ash Williams. Those familiar with the IP know what comes with this: lots of humor, lots of wisecracks, and even a few of his iconic lines. But Ash is not the only one to make an appearance in The Game, as notable characters are plucked from each property. Whether you watched everything or just one film, you will recognize at least one other character, whether it be Scotty from the first film, Annie from the second, or Pablo from the TV show. The visceral gore is also fully embraced here, with blood splattering everywhere, painting Survivors in red, and there's fun violent finishing moves you can perform on enemies. Chainsaw killings and shanking skeletons, it's here and gloriously animated.

If you're itching to kill Survivors, you will control the Demon, an evil spirit with the daunting task of stopping these four humans. However, Demon players have a long list of powers at their disposal, such as activating Deadite portal traps at predesignated locations, the additional use of setting portals anywhere, the advantage of possessing any Deadite within a match, and the ability to have trees spook Survivors in a ploy to make their Fear meter rise. Ensuring Survivors have high Fear is an essential tactic, as it allows you to actually see them on the map at any distance and, more gleefully, possess a Survivor in an attempt to attack others in the gang. 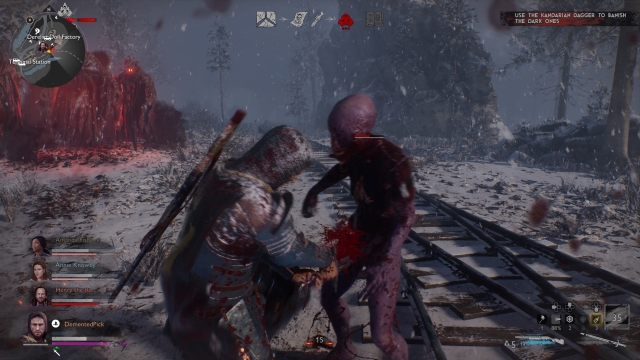 While all of that may sound extremely powerful, Demon users have an uphill battle once the match actually starts. Like Survivors, they start with nothing, being forced to roam the environment to collect red orbs. This is a must, because performing any special action requires red orbs. Doing so also eventually allows you to unlock and then upgrade several vital abilities, which include basically everything mentioned in the previous paragraph. Making things more tense for Demons is the fact that you can't see Survivors on the map from the beginning, nor the first three items they're searching for. To say that you'll be running around like a headless chicken on your first... possibly half-dozen matches would be an understatement. Not to mention you will be completely wiped out by your own inexperience and the combined experience of four Survivors.

However, these shortcomings bring a trade: the more you play, the more you gain XP which can then be used in each character's skill tree to upgrade a wide assortment of enhancements. Here, you can unlock such strengths as finding Survivors more easily, red orbs filling up faster, and much shorter cooldowns when using abilities; the more you unlock over time, the more powerful your chosen Demon becomes. Survivors also have their own skill trees and to make things more varied, characters are separated into classes: Leader, Warrior, Hunter, and Support. Each class has something they excel at, such as Hunters being good with guns and Support exceeding with heals. Humorously, the four incarnations of Ash are available in each class and, if you're versed in the franchise, you can easily guess which one belongs to which class.

As you can tell, there's a lot going on concerning structure and mechanics. But with any asymmetrical online title that has two radically different sides opposing each another, there's bound to be some balancing issues. In The Game's case, Survivors clearly have the upper hand over Demon players from the start. For example, a team can consist of a Level 6 Leader, a Level 23 Hunter, a Level 15 Support, and a Level 11 Warrior, and to put things into perspective, the max level for Survivor is 25. You'd think there might be some issues with a team having low level characters, but if every player knows how to play the game and play it competently, they can win the match. Demon players have it much rougher early on. How so? The max level for Demon is 45... and for them to stand a fighting chance against a decent Survivor team, they would have to be at least anywhere from 30 to 45.

That's a lot of leveling up to be had.

The reason for this is because the more helpful abilities are usually locked midway to the end of a skill tree, and it doesn't help that their trees are much bigger and with more branches. Such abilities include giving your Deadite units more health, allow them to cause more damage, as well as having a shorter cooldown for spawns, and being able to have longer possession times. If you dare take on Survivors with a Level 15-ish Demon, the chances you get wiped out in most matches are huge; everything you try won't last even a second against an average team. This doesn't even take into account how Survivors can find special powerful versions of typical weapons in a match, which can kill a Level 45 Demon's boss summon within seconds under a coordinated team. Not to mention each Survivor has a special talent, such as Ed Getley cancelling traps or Amanda having unlimited ammo for a set time. 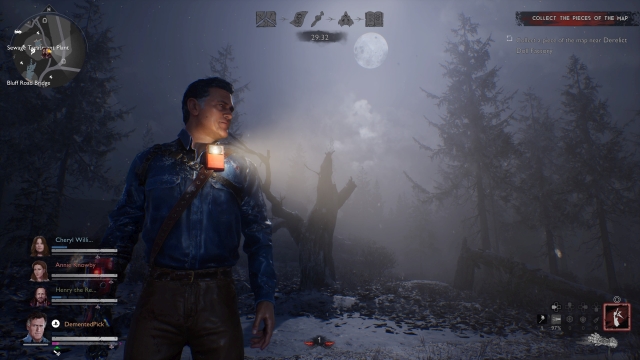 Suffice it to say, this heavily influences the way The Game is perceived when played a certain way. If you just want to play Survivor, then you'll have more enjoyment right from the beginning even if you're not that good. You'll lose a bunch of times and blame Demons for being overpowered if you're generally bad at video games, but still have fun. If you play both sides, you will get irritated playing as Demon, but you can easily swing over to Survivor and just dump XP into the former as you play on. However, if you mainly want to be a Demon, you're screwed for a long period of time.

As a licensed product of a beloved horror franchise, Evil Dead: The Game is an excellent example of paying proper tribute while almost succeeding as a pure video game. While delivering so much fanservice and references, the devs managed to make it an entertaining action gore fest... for the Survivor side. No one should have to play hours and weeks on end, leveling up a Demon, just to properly play a main feature in a game, but that's exactly the scenario presented here. As is, if you still intend to get this game, know that you will be treated like a pinata if you ever play Demon. Also, considering this review is based on the PS5 version, it is advisable that you turn crossplay off. Sure, playing against Xbox users sounds fun, but know that you will get cheaters if pitted against users playing the Epic Games store version.

Because surely you don't want another reason to get annoyed as a Demon...

If you enjoyed this Evil Dead: The Game review, you're encouraged to discuss it with the author and with other members of the site's community. If you don't already have an HonestGamers account, you can sign up for one in a snap. Thank you for reading!

© 1998 - 2022 HonestGamers
None of the material contained within this site may be reproduced in any conceivable fashion without permission from the author(s) of said material. This site is not sponsored or endorsed by Nintendo, Sega, Sony, Microsoft, or any other such party. Evil Dead: The Game is a registered trademark of its copyright holder. This site makes no claim to Evil Dead: The Game, its characters, screenshots, artwork, music, or any intellectual property contained within. Opinions expressed on this site do not necessarily represent the opinion of site staff or sponsors. Staff and freelance reviews are typically written based on time spent with a retail review copy or review key for the game that is provided by its publisher.