At a media briefing ahead of E3 2017, Ubisoft finally revealed one of its worst kept secrets. That secret was Mario + Rabbids: Kingdom Battle, an odd mixture of puzzle solving, strategic battles, Mario, and those mischievous rabbids that were doing the whole "minions" thing before minions were even a thing. When the project initially leaked, a few weeks ahead of its scheduled unveiling, people around the Internet wasted no time telling one another it would suck. As often happens, they were wrong.

Mario + Rabbids: Kingdom Battle does suffer from a short list of disappointing issues I'll discuss in a moment, but the concept people were so quick to dismiss certainly isn't on it. The general idea is that some rabbids got sucked into a vortex that carried them from their world to the Mushroom Kingdom, where one of them is now equipped with a strange helmet that zaps creatures and fuses them together. This creates serious havoc. Most of the invading rabbids are also under some sort of mind control that makes them extremely hostile. So there are quite a few problems, and the best way to fix them is with a gun. 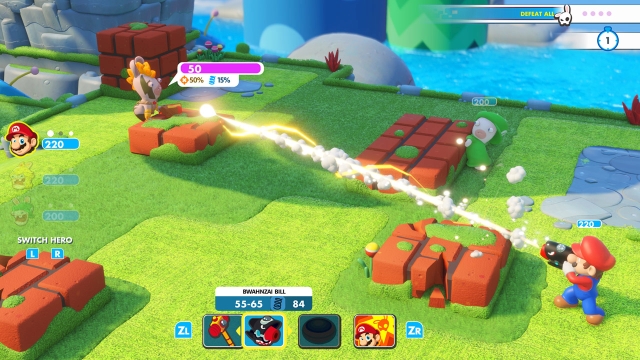 Yes, a gun. I never thought I would see the day when Mario was blasting at his foes rather than stomping them and kicking them with turtle shells. To be fair, he does plenty of that other stuff, too. But he and his friends (a group that includes rabbids hilariously cosplaying as the Mushrom Kingdom's finest) also now spend their time firing projectile weapons, tossing grenades and seeking safe cover from a barrage of bullets. That's obviously new territory, and so is the gameplay. It feels more like Disgaea or XCOM than you would probably ever imagine.

The game design features two primary components. The first of those is the exploration. You wander isometric worlds (think Super Mario 3D World) and search for equipment and collectibles before eventually finding yourself in battle with various rabbids. Then you move your three available units around battlefields, firing from a distance, using special abilities to buff, heal or debuff, and getting up close and personal for dash and stomp attacks as appropriate. Winning allows you to progress further into the world and keep repeating the process as the story unfolds and you eventually face bosses or advance to another world. 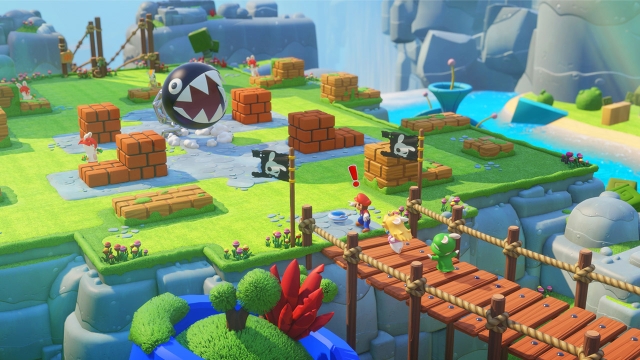 Exploration feels odd. At first, I kept pressing the A button in hopes Mario would jump, but he doesn't. This important restriction allows the developers to throw small barriers in front of you and force you to get clever by pressing switches and such to find ways past them. You'll often see a tantalizing treasure chest on the other side of a short wall, but you can't get to it unless you find a pipe that wraps around the area, or you smash blocks or place statues on pedestals or whatever (if you even have the ability; you may have to come back later).

The regions you explore are beautiful, with lots of foliage and plenty of tourist-y sites along the way. Usually, the vistas are interrupted by scenes of the rabbids doing something silly, like sitting on an over-sized rubber duck, or chasing each other around the environment. Classic music from the franchise plays in the background the whole time, and I saw in the closing credits that Koji Kondo (Nintendo's most famous composer for decades now) supervised that aspect of the game. There also are some tunes I think must be new, because I didn't recognize them. They fit right in, though. 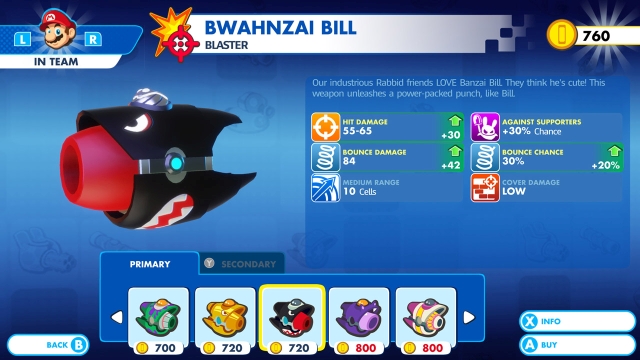 The downside to such detailed, intricate worlds is that it's really easy to get lost. If you stick to the beaten path, the markers are pretty clear. Often, a trail of coins leads to your next destination. However, you need to look around carefully to avoid missing collectibles, and that makes it easy to get disoriented unless you're keeping close tabs on landmarks. Several times, I backtracked a long way through an area, simply because I got turned around. That's not usually a problem I have with games of this basic type. The camera isn't always helpful, either. It can get hung up on obstacles and sometimes you have to guess for a bit about where you should run until finally you get free of the constraints. That sort of issue feels like it would have been addressed if an internal Nintendo team were leading development, though such instances are thankfully rather rare.

Well before I reached the end of the campaign, I came to realize there were for the most part three or four distinct environmental puzzles. They just kept repeating, sometimes with more steps required to clear them, or with a strict time limit in place. I became reluctant to engage with them, because they so often felt redundant, but I understand why they were included: to break up what had the potential to be a monotonous campaign full of nothing but combat.

That's not to say the game's combat is bad. It's actually quite deep, on par with something you would expect to find in an older Disgaea game. Your characters all make their moves in a single overall turn, and then the enemies get to go. The two opposing forces keep alternating until you win (by eliminating the opposing team or boss, by successfully escorting a key character, or by meeting a head count quota) or you suffer a humiliating loss. The battlegrounds are filled with obstacles, such as large blocks you can use for cover and pipes that warp you around the field. Enemies make expert use of these resources. You simply have to do a better job. 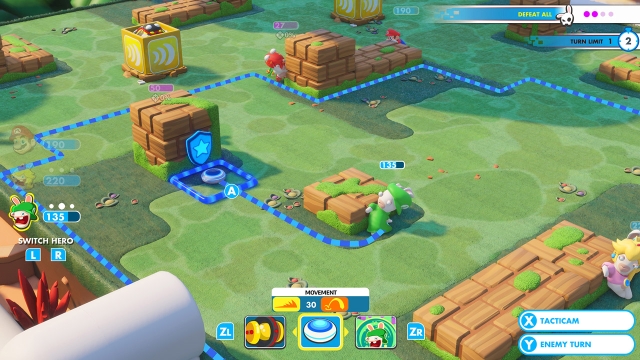 So this is where I admit something: I was awful at customizing my units. The way it works is that every time you clear a level, you gain orbs you can spend to teach characters skills. For instance, you might give Mario the ability to stomp on his foes, and then you might spend additional orbs improving the strength of that stomp or the distance he is able to rebound. Like a fool, I mostly went with options that improved my attack. And those options are important, but mobility is far, far more helpful. If your characters can't run and hop all over the place, they eventually won't be able to keep up with their foes and battles will start going wrong very quickly. You can reassign all of your orbs at no cost if you mess up, but I was stubborn and I didn't realize the handicap I was placing on my characters.

But anyway, you don't have to make my mistake. You can let the game allot points for you, or you can focus on mobility. That's the approach the developers clearly had in mind, even though the tutorials never quite say as much in-game (or if they do, I missed it). Once you're able to move long distances, combat becomes a great deal more enjoyable. For instance: you start rushing an enemy and you dash through him, dealing damage. Then you duck to a pipe to the side and it transports you to an overhead ledge, where you dash through another foe. But you're not done. You find another pipe and it carries you to another nearby ledge, where one of your other units is waiting. So you hop onto his head and he tosses you to yet another ledge. You have just enough moves left to duck behind cover, and from that vantage point you fire on a foe halfway across the battlefield (Luigi is an excellent sniper, I must say). 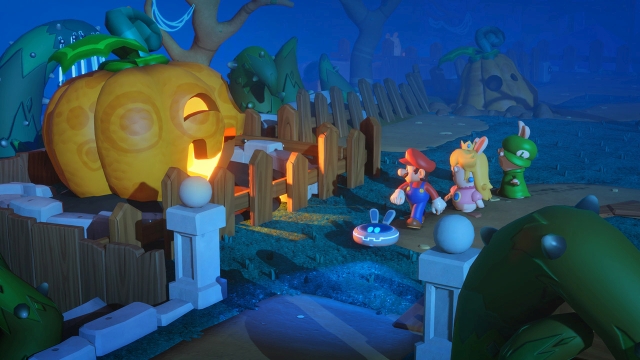 Now, imagine the A.I. doing the same sort of stuff. I hope you can see how battles might get intense in a hurry. Sometimes, it feels like the game is cheap, because there are status ailments and preemptive attacks and such, but that's all just part of the system. Once you learn to work things in your favor, the combat really comes to life. I just worry younger gamers will have trouble mastering some of its intricacies, and that older players will dismiss the game altogether without even realizing what they're missing.

I'm glad Mario + Rabbids: Kingdom Battle exists. The pockets of tedium sandwiched between various highlights hold the experience back a bit, which could chase away audiences that otherwise would have a thoroughly good time. But do give the game a shot if you can. Its charming mix of strategy and puzzle solving is terrific when everything comes together properly. Make sure to temper your expectations accordingly going into the experience and you'll probably wind up liking it a lot.
4/5

If you enjoyed this Mario + Rabbids Kingdom Battle review, you're encouraged to discuss it with the author and with other members of the site's community. If you don't already have an HonestGamers account, you can sign up for one in a snap. Thank you for reading!

© 1998-2020 HonestGamers
None of the material contained within this site may be reproduced in any conceivable fashion without permission from the author(s) of said material. This site is not sponsored or endorsed by Nintendo, Sega, Sony, Microsoft, or any other such party. Mario + Rabbids Kingdom Battle is a registered trademark of its copyright holder. This site makes no claim to Mario + Rabbids Kingdom Battle, its characters, screenshots, artwork, music, or any intellectual property contained within. Opinions expressed on this site do not necessarily represent the opinion of site staff or sponsors. Staff and freelance reviews are typically written based on time spent with a retail review copy or review key for the game that is provided by its publisher.