You might not know this, but Im not a car nut. Dont get me wrong, I love em. Theres nothing quite like the lines of a 1970 Mustang to winnow a sensual coo out of me. I dont know the difference between a Coupe, Mach 1 or Boss 302 (mostly). Alls I know is theyre sexy hardware.

Gas Guzzlers Extreme is, first and foremost, an arcade racer with semi-realistic physics. Youll race around on tracks patterned after the real world collecting items and hunting down your opponents whilst managing a beastly machine. There are single and multiplayer options, but for the purposes of this review Im focusing on the single seated gameplay. 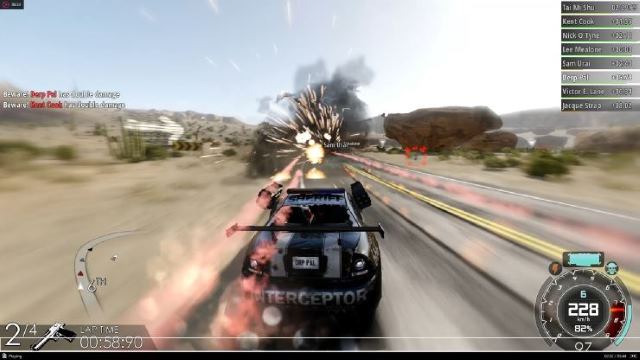 Pursuing single player Career Mode is simplistic, and has no story to speak of. Gamepires makes no apology for this, instead youll delighted to see Quick Race at the main menu when you just want to get knee deep in littered car parts. You start with Micro GT (Austin Mini) and are shoved right into a Power Race. Its tutorial mode the hard way.

Career mode is how you unlock all six game modes, eighteen cars and twelve weapons. That may sound a little sparse, but you can clock fourteen hours before youve unveiled everything Guzzlers has to offer. Gampires has made a choice here, as the learning to control your weaponized racer can take a little time. Youve got to get accustomed to being knocked around the track while trying to maintain your rank; health; ammo and any (or all) optional objectives each race offers.

Worry not, as Guzzlers lets you get into the most well known muscle/sport cars in history, like the Dodge Viper, known here as the Dogg Dyper; the Fordiac Bandit of Dukes of Hazzard fame and the oddball hero of the bunch, the Defiant Regale, or Reliant Robin. The latter was added by player demand, and its actually quite a bit of fun to take a beating and deliver a beatdown in this three wheeled icon.

Not unlike some of the cars it touts, Guzzlers was known as unnecessarily demanding. With physics accurate enough to portray the weight of a several ton racer, less than optimal framerates could impact your reaction time. Fortunately, graphics options complete with presets enable you to quickly find a setting that will give you that all-so-important 60fps. Whats more is the developers overhauled the engine in 2016 so that runs even more smoothly than at launch, by no small margin. Its nice to see a game tended to when the expectation as long ago passed by.

Speaking of expectations, good controls are yours  and mine  and youll have keyboard, Xbox controller or steering wheel to choose from, depending on your setup. You can play with deeper settings to adjust non-essentials like player nickname visibility and so on. I never had the feeling that my car was doing anything other than I told it to, even if I smashed head first into a barrier. Vehicle feel is undoubtedly Guzzlers strongest selling point.

This isnt Mad Max; upgrades are performed in an orderly fashion between races at your leisure. At first your car will only have one or two options, but as you reach the top gears, youll be dropping tens of thousands on three tiers of armor, brakes, tires and nitro. While youre waiting for a sponsor to notice you, choose from a respectable selection of stickers, rims and well, thats it. 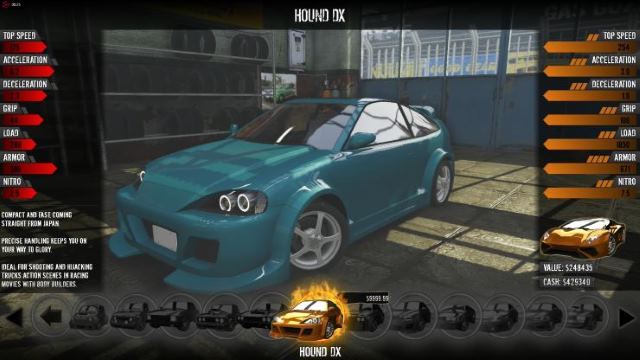 No spoilers here, regrettably, and no hood scoops, mag wheels or noisy mufflers. You wont be tweaking your suspension or acceleration curve. Stock performance with fixed improvements is your only way to the top. It works, but I would have enjoyed more customization and perhaps some tweaks to appeal to the gearhead in me.

Weapons come in four types; guns, missiles, grenade launchers and  well, thats be spoiling it. Although the best suffers from a mechanical choice that applies to all weapons. Theres no lock on or aiming to speak of. Semi-realistic physics, remember? Point your noise at your enemy, pull the trigger and hope for the best. This mode of combat places machine or shotguns at the top of the heap. You might have missiles, but when their accuracy is less than 50%, you cant make every shot count.

Guzzlers doesnt stray far from the asphalt as modes and power-ups go. You can pick up a small selection of items on the track, such as repairs (marked by a green circle); oil slicks, nitro fuel, shields, mines and smoke, all marked by red circles. Mines are so well illuminated as to be easily avoidable, though they can catch you by surprise when things get heated. Over time youll learn when best to employ these pick ups  for instance, smoke is particularly troublesome at a tight turn. 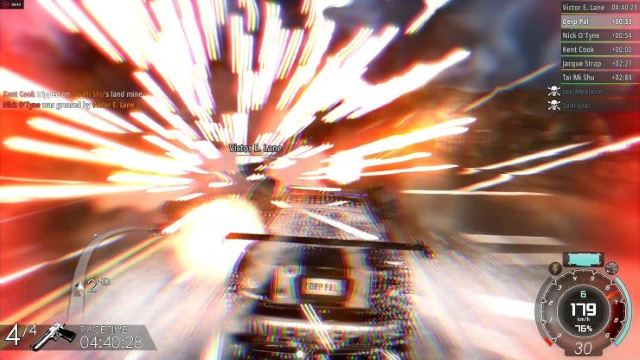 Now, all this hardware wouldnt be any fun if you didnt have modes and tracks upon which to conduct your violent antics. Fear not, Gampires has toured the track typical: Five modes populate the slots as follows: Power Race, a weaponless affair where pickups are your only means of offense and defense. Battle Race is as you expect, but keep in mind that peaceful first lap stretch before your hit the Fire Zone.

Knockout, Deathmatch and Last Man Standing round out the action, and are variants of destroy all your opponents gameplay. These have dedicated tracks that arent suitable for racing and have been laid out to give you places to duck and run, or hunt as you choose. Camping isnt a factor in Guzzlers, as ammo and weapon pickups in these modes are plentiful. Sponsored Races also tender bonus cash when you don their branded wrap.

Apparently Capture-the-Flag is also a thing, but as of this writing I have yet to unlock it with twenty hours of play logged on a single campaign.

Guzzlers is a great looking game; damage effects are spectacular, and car models are reasonably breakable. If you lose your hood, its gone, though that bumper is never going to pop off. Your cars never going to be disabled during the race, unless its health is reduced to zero, an instant race loss. They strike the balance between entertaining and frustrating; a bugbear for other races in the genre.

Why dont we talk Downloadable Content? Its regrettable that in singleplayer mode the DLC brings absolutely nothing to the table. No new cars, just a few new modes to mess around with. Without diving into the Multiplayer, theres no point in discussing them, so lets park this baby.

Cheeky humour, clever generic car names put the extra kick in this titles pipes. Controls are responsive regardless of your taste. The soundtrack supports the action with imitation rock that by default does not overpower. This ride has been tweaked over the years into a finely tuned precision machine. The addition of the Lazy Game Reviews host riffing out Duke Nukem style quotes is a nice touch.

Guzzlers has aged well thanks to the doting attention of Gamepires and their publisher, Iceberg Interactive. However, in 2017 it boasts a price of nearly $30 (CDN), unchanged since launch. Yes its a niche title, but if you want to get your destruction kick, Steam is literally lousy with alternatives. Career mode isnt in depth enough to enjoy as more than a trainer for the multiplayer modes. Stock upgrades are as quickly forgotten after purchase. The set-it-forget-it attitude works for arcade, but if youre looking for deeper gameplay, this isnt your wheelhouse. Multiplayer requires multiple copies of the game, and that can cost as much as $80, more than the most expensive Triple A titles for easily a tenth of the content.

There just not enough content on offer here to warrant a full price purchase, especially four years after launch. Watch for a hefty sale and you can snatch up a really pretty package thatll entertain you for dozens of hours.

If you enjoyed this Gas Guzzlers Extreme review, you're encouraged to discuss it with the author and with other members of the site's community. If you don't already have an HonestGamers account, you can sign up for one in a snap. Thank you for reading!

© 1998-2022 HonestGamers
None of the material contained within this site may be reproduced in any conceivable fashion without permission from the author(s) of said material. This site is not sponsored or endorsed by Nintendo, Sega, Sony, Microsoft, or any other such party. Gas Guzzlers Extreme is a registered trademark of its copyright holder. This site makes no claim to Gas Guzzlers Extreme, its characters, screenshots, artwork, music, or any intellectual property contained within. Opinions expressed on this site do not necessarily represent the opinion of site staff or sponsors. Staff and freelance reviews are typically written based on time spent with a retail review copy or review key for the game that is provided by its publisher.