You're gonna need a better stylus. If you decide to build your own courses in Super Mario Maker 2 you will, at any rate. And the suite of convenient features that allows you to build your own Super Mario games is the title's primary selling point. There are reasons to give it a shot besides that, certainly, but creative release is numero uno.

So rather than start with that, I think I'll detail one of those other reasons first. At least for returning fans, it's a pleasant surprise worth noting. Here it is: the game includes more than 100 levels designed by Nintendo's internal team. That's nearly four times as many stages as were included in Super Mario Bros. back in the day, and more than were included in Super Mario Bros. 3 or Super Mario World. Remember also that those levels are just the tasty side dish you can enjoy when you're not busy with the main course. 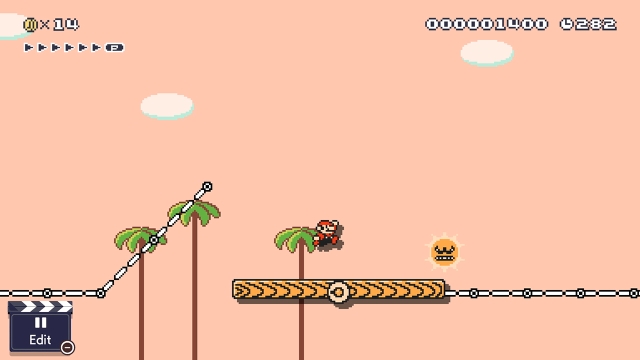 I don't know about you, but I love 2D platformers. Give me a few ledges inexplicably hanging in space and I am one happy fellow. Super Mario Maker 2 includes numerous stages that definitely fit the bill, even before you look at user-created content. They're all over the place, though, and that's arguably the biggest mark against them. I like the sense of cohesion the early games in the franchise had. Remember moving from grassy plains to sweltering deserts to a chain of islands to a world full of giants in Super Mario Bros. 3? In my mind's eye, I can picture each of those worlds and recall impressive highlights. Reaching the villainous Bowser felt like a proper journey, one worth embarking on repeatedly.

There are unfortunate moments when the stages in Super Mario Maker 2 feel more like chores than adventures. It probably doesn't help that they are literally presented as "jobs" you must complete in order to generate the revenue that will allow a group of Toad characters to rebuild the castle for Princess Toadstool . Stage difficulty is rated from 1 to 4 stars. Greater loot rewards those who challenge themselves.

Here's something some might appreciate: the stages included here, though lacking a unifying theme, make up for that oversight by offering some of the most inventive designs ever featured in a Super Mario game. Some of them--a surprising number, given the mandate for accessibility that I would imagine is in place in the Nintendo inner sanctum--are ridiculously difficult. I don't mean difficult on the same level that you saw in the most infamously brutal player-created courses some folks fashioned for the original Super Mario Maker on Wii U. That would be inexcusable. But they do come closer than I ever expected them to. I worked harder to conquer every challenge than I have since I cleared The Lost Levels in the Super Mario All-Stars compilation. Sure, you can cheat by getting help from Luigi, but I didn't want to go that route and so I paid the price. 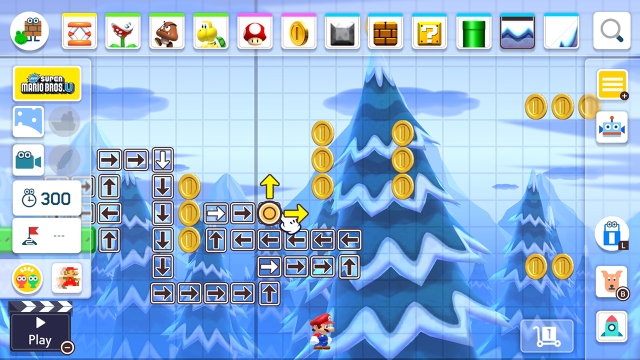 The difficult and the inventive courses serve a noble purpose: they offer consumers examples that might inspire them when they work on their own designs. In some stages Nintendo's team designed, you have to gather red keys to unlock a door that allows you to reach the end. Amateur course creators can produce the same scenario. In other cases, a stage can't be cleared if the player jumps at all, or even is launched from a platform and lands once more on solid ground. Again, that's something you can bake into a course of your own, if you so desire. Stages can scroll vertically or horizontally, and even mix the two orientations. Hills can slope dangerously. Seas of lava and poisonous vapors can swell and subside. Most of what worked in the original Super Mario Maker still applies, costumes aside, and the new possibilities give dedicated creators the opportunity to get increasingly ambitious.

I started my own experience with Super Mario Maker 2 by clearing all of the stages Nintendo itself had provided, which took me somewhere between 10 and 12 hours. The goal of building the castle kept me going throughout much of that process, but there are many more stages waiting the committed player and some neat surprises I won't spoil here. I definitely felt that my time investment was rewarded, even if I hadn't just enjoyed the greatest Super Mario adventure ever. But more importantly, I felt creatively charged. 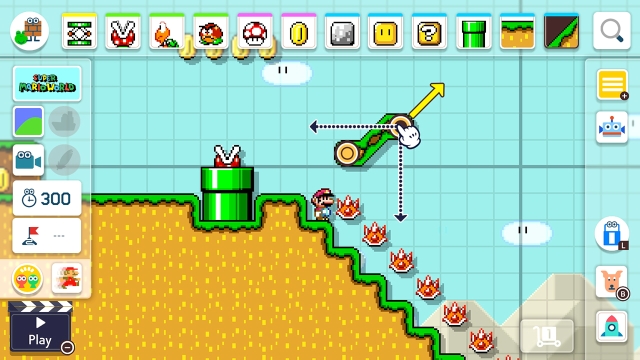 My next natural stop was the optional but fairly extensive tutorial, which offers lessons containing advice on what "makers" should keep in mind while building. Someone at Nintendo seems to be under the impression that if you tell folks not to troll players with unfair design, and if you stress the point several times throughout a tutorial, you might actually convince them to actually respect the player. Ha! Those fools! Many folks were busy creating courses while I went through the ones Nintendo built. My next stop after the tutorial was the Course World area, where my suspicions were confirmed: some people just can't resist being total buttheads.

But whatever. You don't have to wade into the sea of stages completely at random. You can instead advance through worlds that sort them according to their perceived difficulty. The algorithm isn't perfect, and sometimes trolls manage to sneak something through even if you're tackling the "easy" courses, but for the most part you can still enjoy a reasonable experience. And if a stage comes along that obviously pulled one over on the community, you can skip it and move onto the next one. I was glad Nintendo didn't scrap the idea of letting players advance through an assortment of user-created stages as part of an overall effort. I just didn't like that as I encountered stages while playing through that mode, it was harder to download the ones I liked to replay later. There is a tab you can access that provides a list of every stage you've cleared, but the interface could stand to be improved. 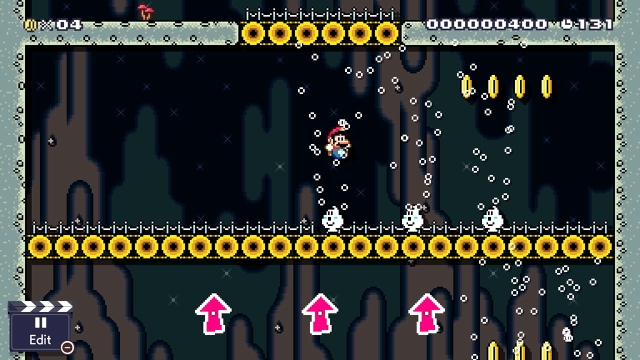 While I'm on the topic of the interface, I should mention that I slightly prefer the first Super Mario Maker when it comes to ease of use while designing courses. That game made great use of the stylus, but Switch owners won't necessarily have one at their disposal. To them I say: "Buy one." That's what I did. You can build stages in docked mode, and the controller has shortcuts and such to make the process easier even without the use of a magical pokey stick, but you're creating with a handicap. I had a much easier time when I pulled my Switch out of its dock and could simply tap and prod with my shiny new capacitive stylus (you can't just grab a normal plastic one from your Wii U or 3DS). I quickly became adept at placing long rows of blocks, or dragging and dropping elements misplaced within environments, or rotating and extending objects such as pipes.

A final feature worth mentioning is the multiplayer. You can either join up with local friends, or take the action online and play cooperatively or competitively. Four players vote on desired course difficulty, then start trying to clear courses. This is a neat idea in theory, but either Nintendo's networks aren't up the demand, or I'm being paired with players who have terrible connections of their own. Using my wired connection, I had terrific speeds available, but the game moved like everyone was swimming underwater. Between matches, I was also disconnected after a delay when there was a server error. It's hard to say whether this feature will gain the infrastructure it needs to succeed in the future or not, but right now I would say it's probably not working as hoped.

As did its predecessor, and in spite of the occasional flaw, Super Mario Maker 2 provides creative fuel so its audience can happily play and create a near-infinite number of courses in the years to follow. Some of the resulting levels will be amazing. Some of them--maybe even a lot of them--obviously won't. But the possibilities are astonishing, and Nintendo itself has packed the game with a pile of content that for some will be enough by itself to justify a purchase, even without the lure of endless wonder that community features promise. If you're intrigued by that potential, do yourself a favor and buy a copy of the game today. Just don't forget the stylus to go with it!
4.5/5

If you enjoyed this Super Mario Maker 2 review, you're encouraged to discuss it with the author and with other members of the site's community. If you don't already have an HonestGamers account, you can sign up for one in a snap. Thank you for reading!

© 1998-2020 HonestGamers
None of the material contained within this site may be reproduced in any conceivable fashion without permission from the author(s) of said material. This site is not sponsored or endorsed by Nintendo, Sega, Sony, Microsoft, or any other such party. Super Mario Maker 2 is a registered trademark of its copyright holder. This site makes no claim to Super Mario Maker 2, its characters, screenshots, artwork, music, or any intellectual property contained within. Opinions expressed on this site do not necessarily represent the opinion of site staff or sponsors. Staff and freelance reviews are typically written based on time spent with a retail review copy or review key for the game that is provided by its publisher.