In Risk System, Newt Industries have on their hands a game changer. Its a horizontal shoot-em-up, and weve all seen our share of those over the decades, but they dont come along very often anymore. Vertical bullet hell shooters are the order of the day on a menu with meager offerings, and they've kept the genre alive on life support in recent times. That said, anything else coming down the pike which is not in that vein is reason enough for celebration for shmup fans, almost irrespective of the quality of the product. When the product is as good and as innovative as Risk System is, it's time to break out the good scotch.

The advancement of technology to where a Dimensional Gate is possible changes the world overnight -- it brings about peace (as all advances in technology do). But energy parasites ultimately cross the threshold, and only a mysteriously parasite-resistant ace pilot named Alys can take the helm of the experimental RSK9 and prevent an extinction level event. Was that a bit hokey? Well, yes, but what did you expect? It's corny but conveyed as it is by a slick anime aesthetic and decent writing, it's also cool. Excellent, thumping, pulse-pounding tunes that fall just short of classic, and bright throwback style graphics that are occasionally too bright power Risk System to the upper echelon of recent genre entries, to say nothing of the core gimmick.

Because, of course, every shooter has its gimmick. And this one...! This one is what elevates Risk System to rare air. 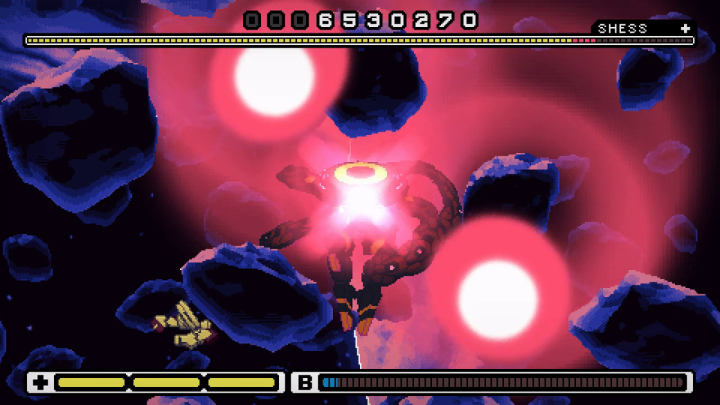 The game demands that you fly into harms way to succeed. It demands that you skirt enemies and their projectiles alike to power your projectiles, and to fill your B-meter towards unleashing the invincible Barrier Breaker, the firing of which is absolutely necessary to kill off-screen enemies and to make it through otherwise impossible passages and boss phases. To its credit, Risk System lends a hand by offering up slick barrel rolls, default auto-fire, and generous hit detection.

Sometimes the game is obvious about its risky business. This is the ground floor, necessarily accessible to good players, and youll need to be good to beat the game, make no mistake. A fleet of enemy ships will offer themselves up as fodder to feed your meter and you simply must feast on them, or the sequence immediately following which requires that you be invincible to gain passage, will claim you. Youll evolve your shooter sensibilities (read, crudely: grow the balls) and do whats necessary, because what choice do you have? Dancing with danger is the only path available to you.

But sometimes Risk System will offer much less of a feast for you; it will offer scraps, the consumption of which will require so much risk for so little meat for your meter. Your approach will have to be fearless and exacting, and you will need to fly in the face of oblivion to absorb just enough energy to achieve a level of destructiveness and efficiency the simply good version of you could not achieve. You'll fill the meter twice for every one time a merely good player would, youll bomb the boss youre tangling with during a phase where you would once cower and catch your breath, and youll work towards A and S levels of skill -- records will tumble and achievements will pop. 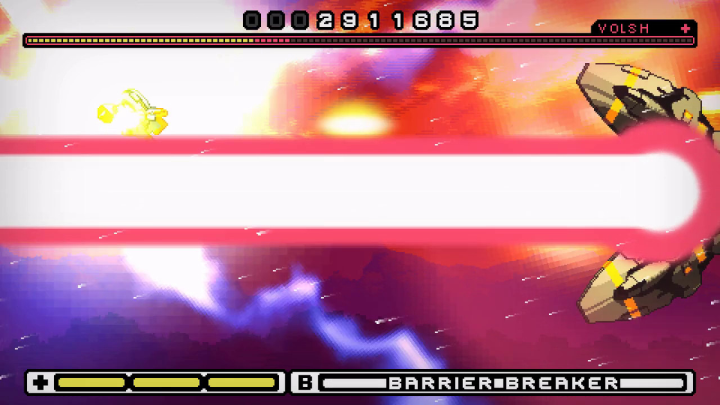 In this way, Risk System offers the opportunity to make you a better shoot-em-up player. Even an old dog will be furnished a chance to learn new tricks which he may take with him to bear on future missions. Youll realize that you have more room to spare than you always thought you did when bullet slipping, and youll become hardened against the fear of skirting too close to danger. Your concept of too close itself will evolve. Of course, Risk System is built to engender this evolution of skill and calm; the controls feel big and floaty, barrel rolls are tight and unspammable, and your game saves after every level for unlimited tries. The next shooter you play might not be this forgiving.

But it also wont be this good. If theres a weakness here, its in the flashy, sometimes hard to make out nature of the often coruscating aesthetic. I occasionally didnt know what I was looking at, and couldn't tell the difference between what I could and couldnt be hit by. The last boss in particular, troubled me for some time based on my taking damage in a way I couldnt understand.

That aside, Risk System represents an intriguing and revolutionary take on the age old genre. It is fresh and demanding and rewarding and there is no risk in you playing it right now. Take on the system and get good already.
4/5

If you enjoyed this Risk System review, you're encouraged to discuss it with the author and with other members of the site's community. If you don't already have an HonestGamers account, you can sign up for one in a snap. Thank you for reading!

© 1998-2020 HonestGamers
None of the material contained within this site may be reproduced in any conceivable fashion without permission from the author(s) of said material. This site is not sponsored or endorsed by Nintendo, Sega, Sony, Microsoft, or any other such party. Risk System is a registered trademark of its copyright holder. This site makes no claim to Risk System, its characters, screenshots, artwork, music, or any intellectual property contained within. Opinions expressed on this site do not necessarily represent the opinion of site staff or sponsors. Staff and freelance reviews are typically written based on time spent with a retail review copy or review key for the game that is provided by its publisher.