A warning: this isn't the obnoxious NES platformer, which, difficult though it is, has managed to age quite well. No. This is the arcade beat-em-up far fewer have played and none but me have championed, which is just as obnoxious and difficult, but has managed to age quite poorly. Although to be fair, arcade Ninja Gaiden was probably never very good: I played it in my formative years, filling an actual arcade machine with quarters to beat it, and I loved it because I was young, it was cool, and it had ninjas.

So I was pretty excited to see Ninja Gaiden get the Hamster Arcade Archives treatment for the PS4. Its a game that I once held an illogical, irrational love for; the kind of love that can only be born of nostalgia. To my credit, when I first reviewed this game over 15 years ago, when it was already 15 years old, though my take was already besotted by the nostalgia virus, I managed to temper its effect somewhat -- hence the average score I gave it. This is where I stop congratulating myself, as it turns out that my old review needed a whole lot more tempering. More time away has afforded me the perspective to provide a more pragmatic view on what is a severely flawed effort.

Before you can say: Hey, it's an old game! Don't be one of those hipster reviewers who miss the point and poke fun at 20-year-old relics for what are essentially inherent limitations! Which, distilled down, amounts to, this old game is so old. That's not what I'm doing here. Ninja Gaiden doesn't hold up to even its own contemporaries. Its flaws run deep, and they were always there, undeniable and all-consuming. 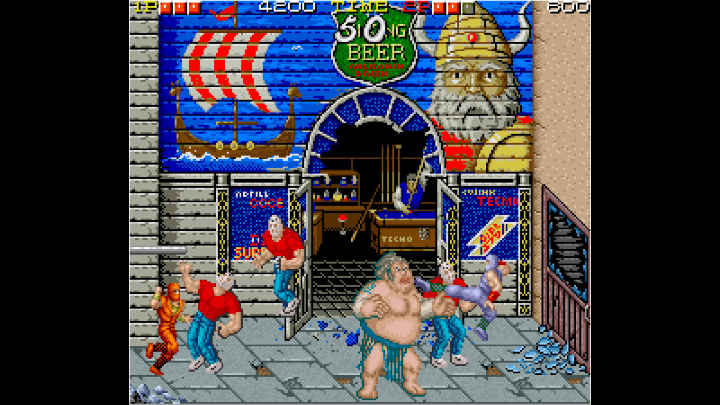 Classics of the genre like Double Dragon, Golden Axe, and Final Fight, all demanded the same tactics. You sweep up-and-down the screen with your hero, strategically positioning your avatar just above or below an enemy, walking the bad guy onto your punches and kicks. Youre always moving, always circling, taking care that you are not flanked, which becomes increasingly difficult to do as more mobile enemies with greater range come at you in greater numbers as you progress.

Ninja Gaiden is no different in this regard. Yes, it meets the minimum standards for the genre -- we can celebrate. But it is different in two other regards though: one good, one bad. The good news first, then: I loved this arcade game for a reason, and that reason was its unique brand of cool. Besides the usual punch and kick combo, jumping and attacking did not effect a mere jumpkick. Instead, it permitted a cartwheel neck throw, which looks the way it sounds -- or the Phoenix Throw, as the game dubs the move, which does not. You'll toss enemies into telephone poles, pop machines, and telephone booths (remember those?). Sadly, you cant toss enemies into other enemies. But you can find all-powerful sword power ups, and grab tree branches and street sign poles overhead in order to swing-kick back and forth as enemies line up to take two feet in the solar plexus.

The game asks you to pound a sumo into submission, kip from high bar to bar across a busy street, and conquer a Vegas-style casino-themed level. And all of this to a wonderfully varied collection of tunes. From a rock rip-off of Iron Man (cleverly titled, "I Am Man"), to unexpectedly solid jazzy renditions, they are consistently hum-worthy. The enemies are a similarly eclectic bunch ranging from a shirtless giant who manages to to brandish an entire 12-feet of tree trunk as though it were a makeshift baseball bat, to a trio of hunched over masked men with Wolverine-like claws, to the scores of Jason Voorhees lookalikes who are a palette-swapped legion. 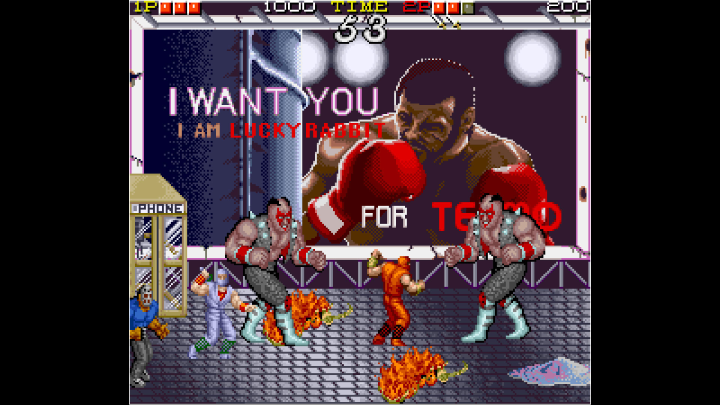 Ninja Gaiden is nothing if not memorably strange. And that's fantastic -- different can be good! But about that other area where the game strays from the usual beat-em-up blueprint? Different can be catastrophic. For some reason, when youre patrolling the screen trying to engage, it's quite difficult to tell if an enemy is on your 'level' or not. This imprecision makes picking a fight far more difficult than it should be. But you'll adjust, and you'll start consistently lining up bad guys to start throwing strikes, and with that under your belt, an even more egregious failing will begin to wear you down. And that's the way the games enemies stunlock your character to oblivion.

This stunlocking happens to a degree in all beat-em-ups, and it's always infuriating to be playing out your little dance circling thing, trying to establish position, only to stray too close to an enemy and be caught with the first shot of their combo. But in other games it usually seems possible for you to break away from that first unfortunate contact. In my experience, this is never the case in Ninja Gaiden. Once a foe gets a lick in, the entirety of the infuriatingly slow and inevitable combo simply must take place, until our favourite blue-clad ninja has a circular saw lowered to his chest (the game over screen is admittedly awesome). It is relentless and it is unavoidable to mere mortals. 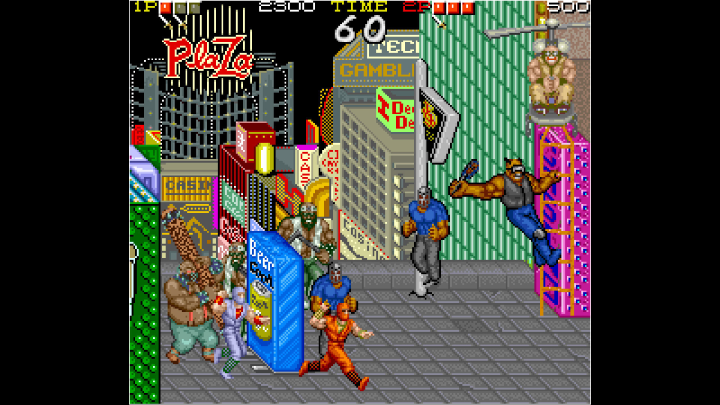 This issue alone cripples the fun that you can have with Ninja Gaiden. Everything else which is so great about it is cast in a washed out and diminished pall once the combat truly and consistently rears its ugly head. And perhaps even more disappointing is how the truly good stuff is itself, compromised. We are treated to a unique and creatively conceived group of bad guys to wage war on. But for all of that, there simply aren't enough of them. While it's par for the course to have pallet-swapped bad guys appear in beat-em-ups, here its taken to another level. There are sequences where you will be swarmed with something like a half-dozen or more of the same guy! There simply needed to be a handful more unique foes to shake things up. Even the bosses are limited: level two tag team wrestlers (think Legion of Doom) are cool the first time they show up. But they also close out level five and then they also make an appearance for the final levels boss gauntlet. It's a bit much.

And so Ninja Gaiden, for all its cool tunes and awesome ideas in terms of enemy creations and locales, ultimately fails because enemy attacks are obnoxious, and enemies themselves are in short supply, and no amount of charm, or even nigh-invincible nostalgia can make up for it. You would do well to leave this oddity alone. If you want to sample its curious personality, watching a YouTube longplay video for a few minutes would likely scratch that itch and spare you the frustration of actually playing the game yourself.
2/5

If you enjoyed this Arcade Archives: Ninja Gaiden review, you're encouraged to discuss it with the author and with other members of the site's community. If you don't already have an HonestGamers account, you can sign up for one in a snap. Thank you for reading!

© 1998-2020 HonestGamers
None of the material contained within this site may be reproduced in any conceivable fashion without permission from the author(s) of said material. This site is not sponsored or endorsed by Nintendo, Sega, Sony, Microsoft, or any other such party. Arcade Archives: Ninja Gaiden is a registered trademark of its copyright holder. This site makes no claim to Arcade Archives: Ninja Gaiden, its characters, screenshots, artwork, music, or any intellectual property contained within. Opinions expressed on this site do not necessarily represent the opinion of site staff or sponsors. Staff and freelance reviews are typically written based on time spent with a retail review copy or review key for the game that is provided by its publisher.