Id spent a long time picking my way through the innards of an alien forest on the back of my giant feline steed before I found myself near the ocean. The purple grassy fields and the twisting treelines slowly receded into white sandy shores and tide-carved rock formations. I was glad for the alteration; the unfamiliar forest, like the majority of Edge of Eternitys locations, are beautiful in their unusualness, resplendent in vibrant, out-of-place colours, but the change in locale meant I was near a fishing village. Here, I could restock on supplies, visit a bounty board, or even craft some new equipment if Id managed to forage the correct items. The plan was to avoid the new collection of roaming hostile wildlife and head straight there. To establish a new hub; to visit an inn and regain flagging stamina; to see what new plot strokes I could discover. It was a good plan. I didnt quite see it through.

On the shoreline, before the village, stands a solitary jetty sneaking out into the endless ocean. Guarded by a weary fisherman, a girl sits right on the edge, as close to the water as she can get. She hears voices, she tells you, they spoke to her in her dreams. Only the voices belong to the god of the ocean, the purveyor of forgotten thoughts. As such, its in their nature to be forgotten, and the girl fears that the fleeting recognition will leave her should she dare dream again. If she forgets, shes certain the god will cease to be. Shes deathly afraid of what might be lost if she sleeps. She hasnt slept in days. 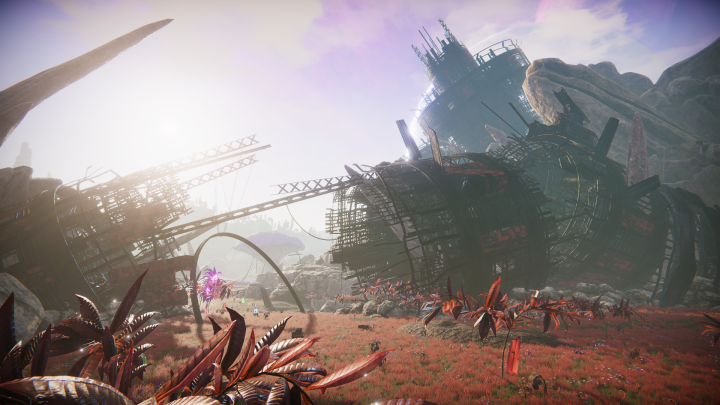 This isnt my first JRPG, so I knew where this was heading. There's a small collection of fetch quests littered around the newly discovered area where youd have to kill X amount of local wildlife, or collect Y from some corner of the beach. And, despite the urgency she placed on how she was struggling to starve off exhaustion, I knew I could wander back late game and pick the side quest back up without any penalty. Despite that, I didnt. I dropped everything there and then and did all the finicky busywork that was asked of me, including a really painful task about searching down scattered tombstones and memorising their engravings so I could be tested upon them later. But I powered through nonetheless, and I did so because I was captivated by the girl, by the sheer terror in her words and the magnitude of loss should her god be condemned to oblivion.

Im making a point here in case it wasnt clear. Sometimes, you ride through the turbulence of Eternitys oft-roughshod gameplay because youre captivated by the world, the characters, the setting. The effervescent realm of Heryon is not unlike Earth, but has developed a completely different ecosphere, encouraging life wed otherwise deem impossible. Its explored by dual protagonists, Daryon and Selene, whose sibling relationship is often the hard focus of many of Eternitys varied highlights. They bicker about past slights long worn down, or share irrelevant little inside jokes incomprehensible to the rest of the world. Like many other siblings, at their core, theyre very different people who perhaps wouldnt get on in normal circumstances, but are bonded together because theyre family. Selenes self-righteous and overbearing, used to getting her own way through weight of intellect and cult of personality. Daryons more cynical, more guarded. Hes the prototypical angsty teen in many regards. Only, for a change, he has every reason to be.

Rather than gift you a jerky protagonist and then dole out hints as to why theyre such an unlikable prick littered throughout, Edge of Eternity leads with it. Like many young adults, Daryon is conscripted to join the Heryon front line in a war against interstellar invaders. Its not particularly well matched; the invaders have starships, battle mechs and laser cannons while Team Daryon have melee weapons, giant cat steeds and magic. The odds were already stacked, and then the corrosion came; a rampaging virus that infected any living being. It warped docile wildlife into rampaging monsters, and perverted once picturesque landscapes into gothic nightmare fuel. It took people and it turned them into something less. Something violent, unthinking and hungry. The opening stages of the game throw all of this and more at Daryon - the desperation and hopelessness on the frontline; the gulf of power between the invaders and the natives; the sweeping undiscriminating cruelty of the corrosion. It changes him. It would change anyone. 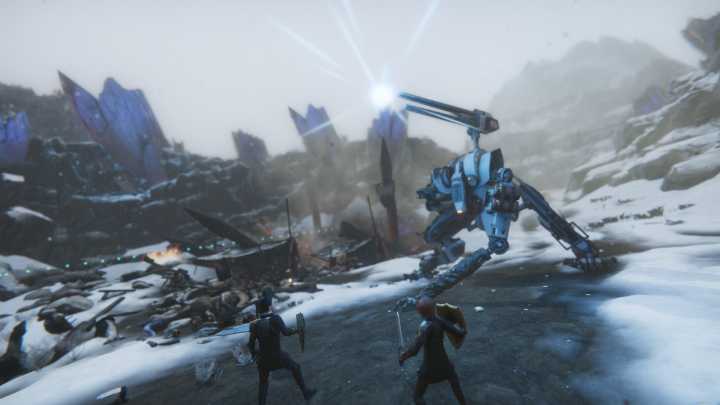 A letter from home is the final excuse needed to desert the war and return to his village. From here, he teams up with Selene and the game proper starts. Theres a lot to like about the pair, who spend a surprisingly large chunk of the game going it on their own before they pick up the obligatory collection of oddballs to assist them on their journey. And its great; the adventure is great, the characters are great, the world is great. Only, you get the feeling sometimes that Edge of Eternity is an incomplete game and that theres various holes where further content should be.

It would be harsh, but perhaps not unfair, to suggest that the current PC build is acting like an early access title to Edge of Eternitys eventual console release. Though the developers are being very open about how theres content yet to come, theres a general unfinished air around the adventure. Quite early on, the siblings come across a nekaroo farm, which are the giant cat steeds I keep mentioning because theyre the best and I want one. Its in a bad location and business is bad, and the pair are offered the chance to purchase it. Daryon is not enthusiastic, but Selene gleefully yells Nekaroo farm! repeatedly into his face until he caves. As of the time of writing this review, buying the farm earns you a permanent giant kitten steed (yay!), but the manager speaks of people youll need to talk to if you want to expand your holding. These currently do not exist. There seems to be plans in the works where you can race Nekaroos around obstacle courses, which isnt fully realised yet.

Theres various little hints that youre not playing the completed product. Sometimes, little prompts appear for side quests and then vanish into the ether, never to be seen again. Has the game glitched you out of further content? Is the quest not actually in the game yet? Has it stumbled across some old code that doesnt exist anymore? Ive no idea! Theres obvious plans for post-game content, but youre currently dumped back at the last rest point before the end-of-game fight if you try and access a New Game + save. The tactically-tinged turn-based combat asks you to position your characters around a hex grid, prompting you to think about keeping spellcasters away from the front lines, or trying to nudge melee fighters into advantageous attacks to the enemys rear. But, sometimes, the camera will freak out if youre by an obstructive bit of scenery, or, sometimes, youll fall right off the map if you stray too near to the edges. 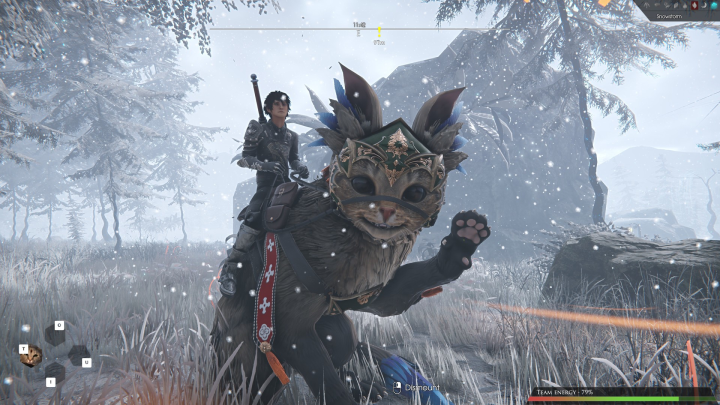 Heres a relevant anecdote; I was several hours into the game, and I had centred hard on something to complain about. Though the world of Edge of Eternity is huge and massively inviting to explore, the game limited your sprint function with a stamina bar. Which meant you had these huge, beautiful stretches of Heryon you wanted to delve into, but had to do in a stuttering run-for-a-bit-then-walk-for-a-bit-while-stamina-refreshes-then-run-again cycle. It was very annoying. When I picked the game up again the next day, it was completely gone. As if it had never existed. Which was, in countless ways, great; it meant I could play the rest of the game free from this weird shackling, and it meant a small development team already a little over their heads considering the scope of their huge JRPG were still making the effort to accept consumer feedback and make improvements on the fly. But, I think, if I was being sold a complete game, I would prefer to play a complete game.

Which makes this ending paragraph weigh a little heavy on my heart, because Edge of Eternity is an excellent adventure that youll probably want to sleep on while it gets itself up to speed rather than rush out and pick up immediately. Even in its ever-evolving pupa form, its genuinely some of the most JRPG-themed fun Ive had in a long, long time. For the impatient, there's enough going on to sustain you through a good 50-or-so hours worth of world saving heroics and petulant sulking aplenty. Also, horse-sized cats that purr and mew as you ride them. I guess the big choice here is do you want to play with one giant kitten now, or a whole farm full of them later. Thats probably the deciding factor here.

If you enjoyed this Edge Of Eternity review, you're encouraged to discuss it with the author and with other members of the site's community. If you don't already have an HonestGamers account, you can sign up for one in a snap. Thank you for reading!

© 1998-2021 HonestGamers
None of the material contained within this site may be reproduced in any conceivable fashion without permission from the author(s) of said material. This site is not sponsored or endorsed by Nintendo, Sega, Sony, Microsoft, or any other such party. Edge Of Eternity is a registered trademark of its copyright holder. This site makes no claim to Edge Of Eternity, its characters, screenshots, artwork, music, or any intellectual property contained within. Opinions expressed on this site do not necessarily represent the opinion of site staff or sponsors. Staff and freelance reviews are typically written based on time spent with a retail review copy or review key for the game that is provided by its publisher.