Ask enthusiasts what games are a must-play on the Ice Cube-approved Sega Saturn, and you're guaranteed to get a Panzer Dragoon title on their list. Or two. Or all three. The franchise about mythical dragons is still held in high regards by many who played the games, thanks mostly to their distinct designs, characters, and music. Its cult following has long yearned for new titles or rereleases, with the closest fans ever got was a Japanese-only PS2 version of the first game, not to mention the fourth game, Panzer Dragoon Orta, still made available for download on Xbox consoles. Graciously, a dev team has taken it upon themselves to give players a recent outing that mixes something old, something new, and something borrowed: a recreation of the very first game, Panzer Dragoon Remake.

Say you've heard vague things about the original game and became intrigued with the release of its remake. What should you expect from a supposedly-revered title? From a gameplay perspective, it's an on-rails shooter. Here, you'll ride a legendary dragon in a bleak, post-war world through deserts, above forests, and across a sea filled with crumbling ancient structures. Along the way, you'll combat a combination of giant insects and huge creatures, as well as airships from the ominously-named Empire, retaliating with manual shooting or a lock-on mechanic. Despite being on-rails, you're still able to navigate your dragon around the screen in an attempt to dodge projectiles or other hazards, such as falling pillars or moving structures from a giant machine. Granted, your dragon is loosely fused with the aim cursor, but that's still easy to work around. 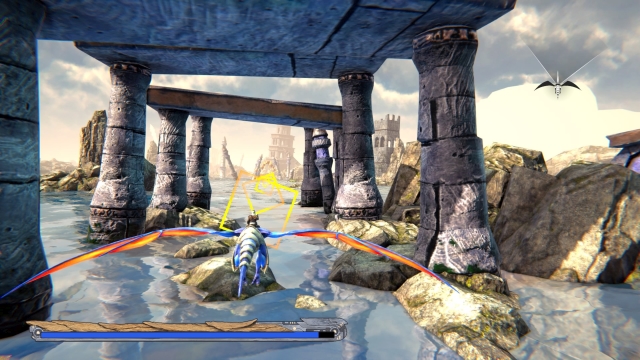 However, Nausicaa Panzer Dragoon was also known for approaching combat differently than other rail titles of its era. Made during a time when games were transitioning to 3D graphics, the original devs decided to incorporate these fresh three-dimensional settings into the gameplay; basically, you can manually turn the camera in 90 degree increments. This is vital to your very survival because enemies won't always attack from the front, sometimes coming in from the dragon's sides or back. Gratefully, you're given a radar, as several stages expect you to keep pace with the rate enemies appear. One stage, for example, takes place in a tunnel that constantly twists and turns, all while sentry-type machinery speedily fly to and from the back in groups. If you're slow to react, then too bad, you'll get hurt and immediately expected to counter the next group.

Now, you might be thinking the last two paragraphs were spent talking about the original Sega Saturn title. You'd be right. However, these descriptors easily apply to the remake as, structure-wise, it follows the original's framework nearly to a t. People who were expecting more of a restructuring from this release will be disappointed, but there's still several changes and adjustments made to the template; the more "questionable" ones being optional, thankfully.

Particularly, the modern control set-up come to mind. It makes sense that this was added, as it tries to mimic the layout of something you would experience in a flight combat title or first-person shooter. This in turn actually separates dragon movement from cursor aiming, which borderline feels like you're playing a completely different game. It's interesting on a conceptual level, but it's something that should be played once you've beaten the game with the classic controls if you're new; it's not a simple switch over, as you're basically relearning the controls and conforming to a different flow. Another thing you can optionally switch is the soundtrack, and though the remake music isn't bad, it feels more like a supplemental remix than something that's trying to outdo the original. Nothing really comes close to the timeless, orchestrated classics of the title screen and first stage themes.

Though, the most obvious of changes clearly go to the visuals. Replacing the now-dated, somewhat pixelated, warped appearance of yesteryear is a presentation in widescreen HD, in a completely rebuilt world. It's reminiscent of Panzer Dragoon Orta in that its textures are more detailed, smoother, and closely resembling the concept art of the series. While the original was fine for its time in showing off the Sega Saturn's 3D capabilities during launch, it came with a glaring problem. You can usually tell what's happening on screen just fine... except when the game throws a bunch of enemies and projectiles at once. Sometimes everything becomes a jumbled mess, which doesn't mesh well with the fast-paced gameplay. Thankfully, you can discern stuff much better in the new version, making combat easier to handle when everyone tries to kill you.

Another major improvement for combat, despite sounding very minor, is an option to adjust cursor turn sensitivity. The Saturn title has very sensitive turning, moving too quickly for its own good, which made targeting enemies much harder than it had any right being. At least with the update, you can now shoot down most opponents without fear of the game screwing you over. This, combined with being able to see more clearly, along with other minor tweaks like destroying the stage two slime projectile without getting hurt en masse, makes Remake an overall smoother experience in comparison to its Saturn counterpart.

But that then segues into something else: length. Despite being a home exclusive for the Saturn, the game has a very "arcade-like" quality to it; there's only so few stages available before you reach the finale, an hour tops. The devs seemed to have been aware of this fact, so they added a system where you have no lives and limited continues, and the only way to gain more continues is have a high kill percentage within each stage. Which, with issues like cursor sensitivity and vision, is a bit hard to pull off, forcing an artificial difficulty spike. However, since these problems have been rectified, the continue system is now a joke. If you've played Panzer Dragoon before, then you can likely beat the remake, adjustments and all, without using a single continue, and maybe two or so if you're a newcomer. 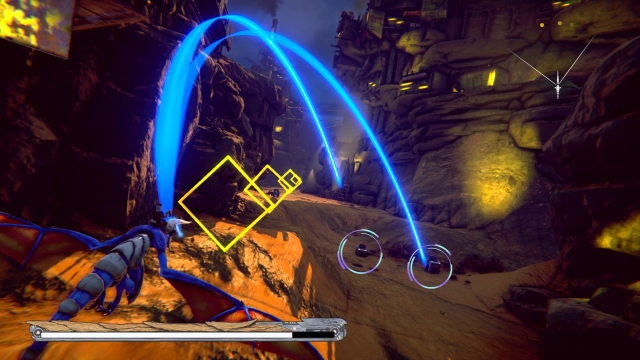 That brings up the ultimate question: is Panzer Dragoon, whether it be the original or the remake, still entertaining in spite of its brief length? The core is fine; it's your standard on-rails affair with a neat camera trick that adds a dimension not seen in its genre prior. But beyond that, it doesn't offer anything truly innovative from a gameplay perspective, just giving you enough to be entertained until the end credits pop up. What helps elevate its status among rail shooters is the unique bleak settings and some of the most memorable tunes you'll hear in the Sega Saturn catalog. The first game has its charm, but when people usually say that "Panzer Dragoon is great!" they're often talking about the sequels, which greatly expand on the framework of the one that started it all.

The first Panzer Dragoon is good, but it's not that good. However, as a title proclaiming to be a remake, doing everything in its power to replicate the original with updated visuals and several keen fixes, it has certainly succeeded in that regard. Hopefully enough success follows this and the announced remake of the second game, Zwei, for it to lead into development of the admired and much sought-after third game. Because the Saturn trilogy definitely deserves a second chance in the spotlight.
3.5/5

If you enjoyed this Panzer Dragoon: Remake review, you're encouraged to discuss it with the author and with other members of the site's community. If you don't already have an HonestGamers account, you can sign up for one in a snap. Thank you for reading!

© 1998-2021 HonestGamers
None of the material contained within this site may be reproduced in any conceivable fashion without permission from the author(s) of said material. This site is not sponsored or endorsed by Nintendo, Sega, Sony, Microsoft, or any other such party. Panzer Dragoon: Remake is a registered trademark of its copyright holder. This site makes no claim to Panzer Dragoon: Remake, its characters, screenshots, artwork, music, or any intellectual property contained within. Opinions expressed on this site do not necessarily represent the opinion of site staff or sponsors. Staff and freelance reviews are typically written based on time spent with a retail review copy or review key for the game that is provided by its publisher.