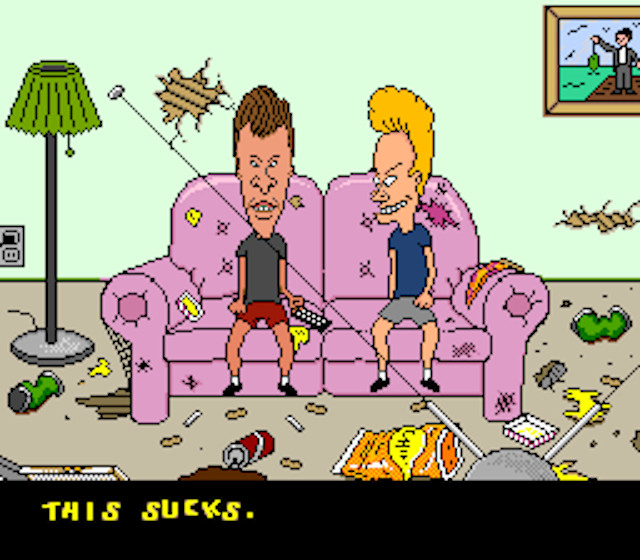 You know one thing fogies like me don't often bring up when discussing retro games? The sheer number of unnecessary licensed apps that were sold at full or near-full price. Old cartoons had game adaptations, "new" cartoons had them, movies had them, sitcoms had them... Hell, even junk food had them. Anything that could possibly appeal to a tween received its own half-assed platformer, shoot 'em up, fighting game, or top-down action job.

Time and again, I got sucked into renting or buying these products because that's what undiscerning kids do. They scream at their parents for the new "Teenage Mutant Ninja Turtles" brawler or blew their allowances renting side scrollers based on popular films. Eventually, though, this loose category's grip on my finances slackened. I partly attribute this shift in interest to my burgeoning love for RPGs, but mostly give credit to one game: Beavis and Butt-head on SNES.

By this point in my life, I asked myself some critical questions: did I really need to rent this game just because I enjoyed the show on MTV? Did the program sport any material that seemed like it would translate to an interactive medium in a thrilling or meaningful way? Of course, the answer to both questions is no... Yet, I defied that logical conclusion and slapped down a portion of my piddling weekly pay for a night's worth of sub-par gaming. 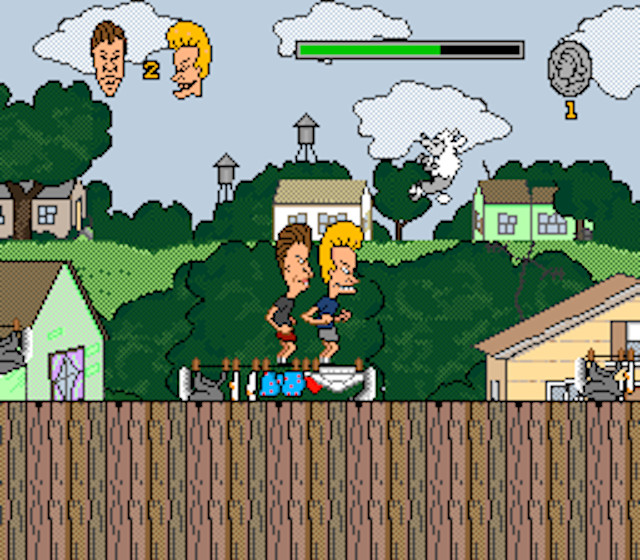 For a quick refresher, "Beavis and Butt-head" is an animated comedy about a couple of lazy, dim-witted troublemakers who embark on asinine escapades. For instance, one episode sees them offering to bathe a neighbor's dog, which they do by taking it to the laundromat and running it in a washing machine. Thankfully the pooch comes out relatively unharmed, aside from a case of nausea that causes it to throw up on itself--thus defeating their whole purpose. Some fans way back derived entertainment from their air-headed antics, while other saw the series as a satire on '90s society. It basically examined the environment and climate that produced the duo.

The SNES iteration of their adventure kicks off one day while they're watching TV. An ad for an upcoming Gwar concert pops up, and the two of them hatch a scheme to "do a bunch of cool things so they'll be let in for free." I don't think that's how concert box offices work...

From there, you get a choice of four levels: the mall, the high school, the hospital, and the neighborhood. It really doesn't matter which one you select, because the experience is pretty much the same regardless: walk to the right, avoid obstacles, fight enemies, keep walking, keep avoiding, keep fighting, take on a boss, done. For the most part, you can easily get through any stage if you adavnce slowly and pay attention. 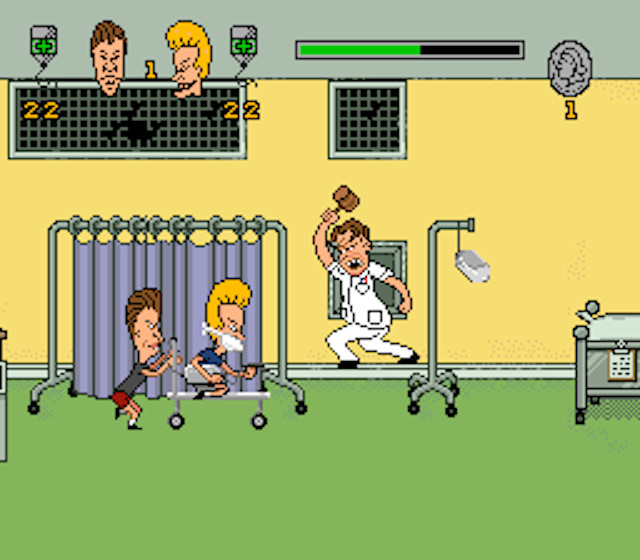 Regardless, the game loves to take cheap shots at you. Sometimes it spawns two enemies on opposite ends of the screen, usually before you can react to either of them. Though you can deal with one, the other often ends up nailing you. Other times, traps crop up in places where they're nearly unavoidable, the worst being a bucket hidden behind a foreground object in the hospital stage. It also doesn't help that our heroes possess large, awkward sprites that render eluding damage nearly impossible, especially when you're dodging swooping birds and falling eggs in the street level.

The hell of it is you only get so many lives, and there are no continues. Yes, you can write down and enter passwords to pick up where you left off, but those keep track of your supply of lives.

To the game's credit, it captures the show's essence wonderfully. Visuals showcase Mike Judge's art style, with backgrounds that resemble set pieces from the television series. Recurring characters also make appearances as enemies and bosses, including Mr. Buzzcut, Todd, Stewart, and Tom Anderson. Sadly, Daria sits this episode out (or she's difficult to spot, as I didn't see her during my recent playthrough)... Meanwhile, music inspired by the kind of hard rock the titular twosome loves pumps from your speakers, complete with their iconic laughs constantly playing as you advance through each uninspired stage.

Yet despite the game's visual flair, it remains tedious from start to finish. The high school sends you down long halls and occasionally into classrooms to battle skateboarders that rush in from either side of the screen. Not long after that, you avoid towel-whipping students in the locker room, plus hop over ridiculously large toilets that house alligators, not to mention occasionally battle Mr. Buzzcut or Todd. 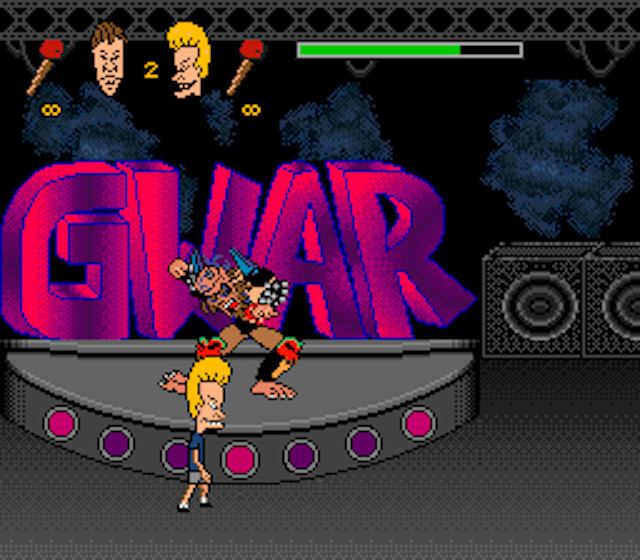 The other three levels try to throw unique segments at you, but with all the excitement of watching water slowly boil. The street stage features a few portions where you bounce along clotheslines while pissed-off dogs leap into the air to bite you. While this section seems neat at first, it becomes apparent that it's a very one-note scene that drags on for much too long. While visiting the hospital, you'll run into a couple of moments where you control Butt-head pushing Beavis on a gurney, who blasts orderlies with a squirt gun filled with saline. Again, this portion hits you with the same content repeatedly: shoot an orderly, move on, jump over a bucket, move on, shoot an orderly... I think you get the picture.

Never mind that the campaign only lasts five levels because it somehow feels longer, and not in a good way. Stages drag on for ages, hitting you with the same, tired environments, rehashed obstacles, and single-hit foes for miles. In my most recent playthrough, I checked out before even completing the first level, as I caught myself daydreaming and Googling random things on my phone. I practically forgot I was playing a game.

You end the experience wondering what the hell the point was, while thinking back on various episodes of the cartoon and realizing that none of its material works as an action game. To people who survived the '90s, this notion isn't difficult to believe because so many brands and IPs saw needless video game adaptations at that time. Ironically, this forgettable game holds a special place in my memories because it's so underwhelming that it snapped me out of my mindless affinity for licensed video games. They don't make games like this anymore.

If you enjoyed this Beavis and Butt-head review, you're encouraged to discuss it with the author and with other members of the site's community. If you don't already have an HonestGamers account, you can sign up for one in a snap. Thank you for reading!

© 1998 - 2022 HonestGamers
None of the material contained within this site may be reproduced in any conceivable fashion without permission from the author(s) of said material. This site is not sponsored or endorsed by Nintendo, Sega, Sony, Microsoft, or any other such party. Beavis and Butt-head is a registered trademark of its copyright holder. This site makes no claim to Beavis and Butt-head, its characters, screenshots, artwork, music, or any intellectual property contained within. Opinions expressed on this site do not necessarily represent the opinion of site staff or sponsors. Staff and freelance reviews are typically written based on time spent with a retail review copy or review key for the game that is provided by its publisher.