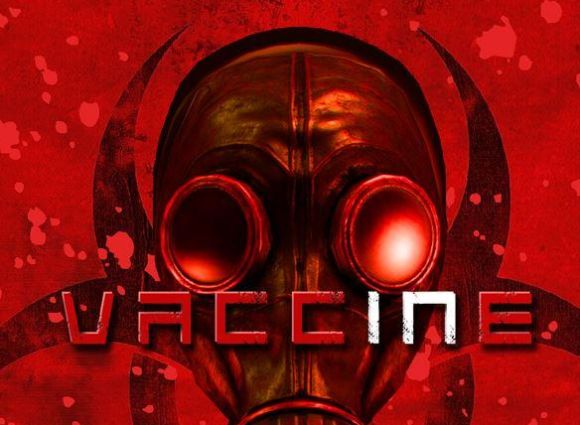 Vaccine boots without much of an introduction. Your partner lies on a bed, suffering from an illness called "Shredder Syndrome." You must locate a therapeutic vaccine within thirty minutes, lest your buddy succumb to the virus. Never mind tutorials or opening cutscenes. With only a half-hour on the clock, you don't have time for that junk, anyway.

If you're a retro horror game junky, sparks of recognition should fly the instant you glimpse the first screen. You start in the middle of a creepy, old house clad in a SWAT team uniform. An eerie piano piece sets the mood, along with fittingly nostalgic presentation reminiscent of a PlayStation or N64 title. The game even boasts blocky character that perfectly fit the theme. As you might have guessed, Vaccine draws inspiration from Resident Evil and proudly wears its influence on its sleeve. It nails the look and feel of bygone survival horror titles, warming my cold, black heart. 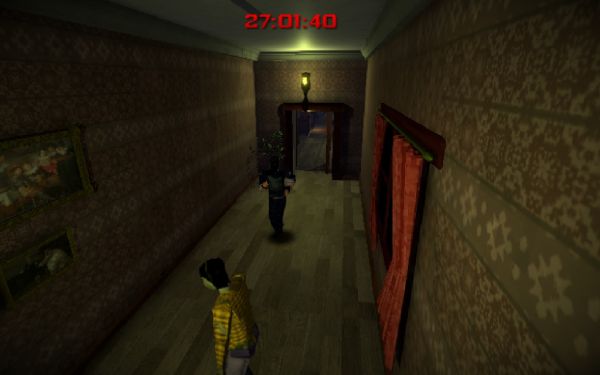 After you're done geeking out, it's time to grab the knife at the foot of your friend's bed and explore the digs. You throw open the bedroom door and enter a parlor, where a jaundiced man cries in the corner. You ignore him, though you remain cautious because of the trust issues you've developed from years spent playing horror titles. You push through another doorway and enter a wide open ballroom, decked out with hardwood floors and expensive paintings. There's also a zombie loitering in the middle of the room, who catches your scent and fancies giving you a nibble. You decide to test out the game's combat system and your battle plays out like this:

You survive the altercation, less a handful of hit points. Thankfully, you live long enough to build up an impressive collection of items that function as buffs, along with a handgun. Your situation appears to be looking up until you come across a spider-like humanoid. It crawls your way, producing a spine-tingling TICKA-TICKA with each step. You unload several bullets into the creature, but to no avail. It corners you and gives you three nasty chomps, at which point you bleed out. Game over. Since perma-death is on the table, you lose everything and must start once more from the beginning.

Close-range fights with the undead result in wars of attrition that eventually wear you down. With practice, you learn to eliminate zombies by walking backwards and striking when a clean opening presents itself. Each zombie falls after a few cuts, so there's no need to worry about the timer when facing them with the knife. Crawlers, on the other hand, are trickier to tackle. You could use a repellent, which prevents foes from attacking whilst allowing you to tear them apart. Sadly, not enough repellents spawn per level to handle all of that stage's crawlers. You could pull the ancient survival horror tactic of running around them, but they will follow you and bring misery with them. 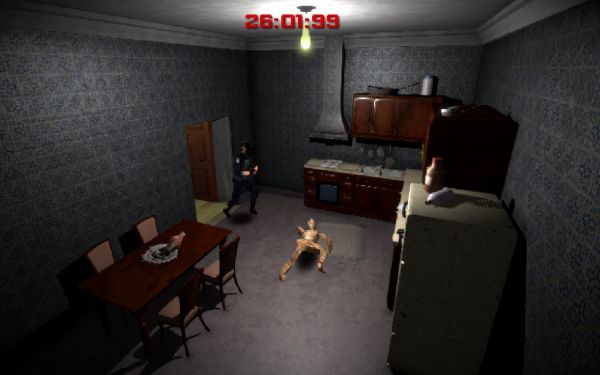 Of course, you could also shut doors behind you as you flee, because Vaccine's baddies aren't smart enough to know how to operate a doorknob. I used this strategy myself until I noticed something simply evil. Crawlers jut slightly through doors when they come into contact with them. If you attack them with the door closed, they still receive damage and won't bother with a retort. You can slice them up and save yourself bullets, and you rack up loads of experience to boot.

While I initially reveled in this discovery (and admittedly felt a bit dirty), I realized it robs Vaccine of its challenge and scare factors. Enemies become less fearsome when you can easily dispatch them by employing cheap tactics. This "strategy" extends beyond crawlers, too. Each stage features a boss encounter against a hulking monster in a secret lab, where the vaccine lies. My first meeting with the beast didn't last long. I entered the room, immediately reversed, shut the door and waited. The creature eventually crept up to it and I repeatedly stabbed him through the barricade, collected the customized pistol he dropped and nabbed the syringe to save my friend.

Victory? Not quite. Vaccine begins anew with a reduced time limit. No matter how many times you win, your amigo falls ill again. However, Vaccine offers a way to break the cycle and witness its true ending. All you have to do is read all of the necessary papers and discern their meaning, thereby allowing you to solve the game's big puzzle. Each level's layout generates procedurally, with relevant information randomly materializing. In other words, you'll play through several failed attempts before you even get an inkling of what to do. 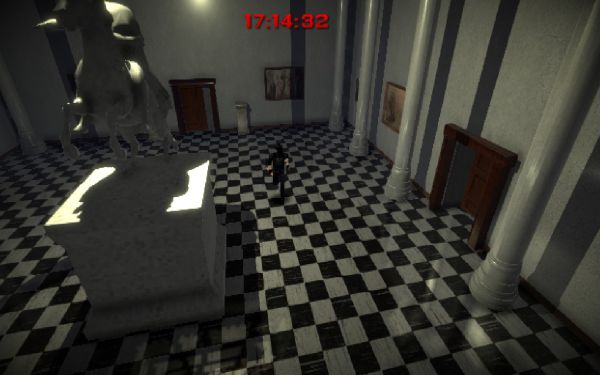 This is where Vaccine breaks down. Its bestiary consists of about five different adversaries, and its environments range from dull rooms to empty corridors. Worse than any of that, though, is the way that each chamber offers only a few landmarks or surprises. Every level is thus a network of banal rooms. In order to truly beat the game, you must tediously scour each stage and scotch the opposition, hoping you become lucky enough to lay eyes on all the right documents. On top of that, you must play through at least three stages in order to win. The third level kicks off with a mere ten minutes to not only nab the vaccine, but also find and solve a trial and error-based puzzle. And if you didn't solve the previous two puzzles, you're done for.

Never mind your foes. Vaccine's real killer is one you wouldn't expect: keys. Now and then, the game generates a locked door requiring either a silver or gold key. Securing them is a pain in the neck because they tend to blend in with the environment. Most items are supposed to sparkle occasionally, but sometimes Vaccine places a key where you can't see it glisten. It's frustrating to come so far, only to be defeated by an item's position.

Ultimately, Vaccine falls victim to the same problem many procedurally-generated death mazes face: too many vapid chambers and hallways. However, it's definitely not a terrible title, despite a game-breaking exploit. More than anything, I see it as an experimental adventure that could lead to a more cleaned up and exciting sequel. I'd like that.
3/5

If you enjoyed this Vaccine review, you're encouraged to discuss it with the author and with other members of the site's community. If you don't already have an HonestGamers account, you can sign up for one in a snap. Thank you for reading!

© 1998-2020 HonestGamers
None of the material contained within this site may be reproduced in any conceivable fashion without permission from the author(s) of said material. This site is not sponsored or endorsed by Nintendo, Sega, Sony, Microsoft, or any other such party. Vaccine is a registered trademark of its copyright holder. This site makes no claim to Vaccine, its characters, screenshots, artwork, music, or any intellectual property contained within. Opinions expressed on this site do not necessarily represent the opinion of site staff or sponsors. Staff and freelance reviews are typically written based on time spent with a retail review copy or review key for the game that is provided by its publisher.