Game developers have thought up some really absurd ideas over the years. Some of them work, some of them dont. Sometimes an idea will seem so stupid that you wonder why they even tried, and yet, once you play it, it is actually quite enjoyable. An idea along the lines of single-player poker.

Poker Night at the Inventory is a celebrity poker game from TellTale Games, featuring characters from their own franchises and elsewhere. Youll play Texas Hold em poker against Max from the Sam & Max series, Strong Bad from his online cartoon (and TellTale adventure series), The Heavy from Team Fortress, and Tycho from Penny Arcade. Reginald van Winslow from Tales of Monkey Island performs the role of the host, introducing you to the game and providing commentary on the poker games as they unfold, along with raising the blinds from time to time. 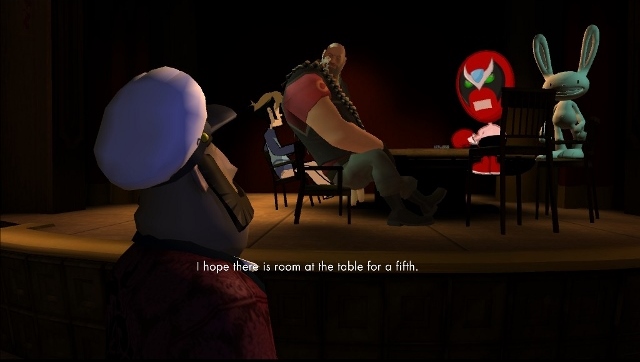 The players will banter amongst themselves, making references to their own franchises and commenting on each others. These characters are well chosen, and they each bring something different to the group. Unfortunately, you will start hearing a lot of the same lines over and over again. Theres a setting to decrease the frequency of these conversations, so youll probably end up doing this after a few hours of play.

Functionally, the interface works well  Ive certainly seen clunkier interfaces in other poker games. You have buttons for fold, call and raise (the plus and minus buttons next to Raise can be a little fiddly). You can see your two hole cards, and youll be able to see the community cards on the table as they are revealed.

The thing about poker is that it isnt a game about having the best hand of cards  you dont play the cards, you play people. Youre constantly watching the other players to see if they give away anything about their cards  are they bluffing? You also have to make sure you dont reveal anything about your own hand. 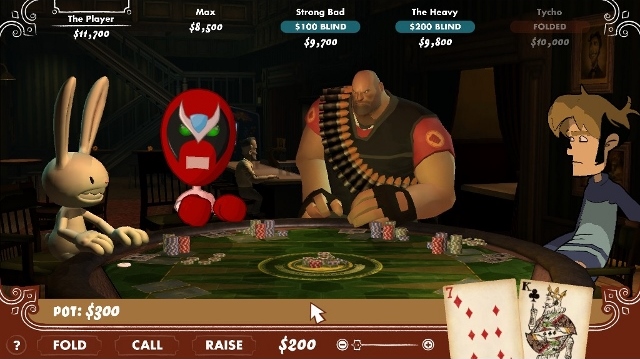 When playing against AI, that aspect of poker is a lot less complex. The other players will try to bluff you and goad you into betting. Youll also scare them off if you bet too much, too soon. Each of the characters has their own tells that youll quickly pick up on.

I would recommend this game to people who are interested in poker and want to practice their skills  knowing how to recognise a good hand, when to bet, when to call, the basics of reading people (although people are much more complex than this lot).

I enjoyed this game because I found it relaxing. The atmosphere of the Inventory is like that of a Prohibition-era pub, with dim lighting and a classy aesthetic. As you win poker games, youll be able to unlock different card styles and table mats. One of the big draws at the time was winning items that could be transferred across to Team Fortress 2. I never bothered with any of that, myself, so I couldnt possibly comment on those items.
4/5

If you enjoyed this Poker Night at the Inventory review, you're encouraged to discuss it with the author and with other members of the site's community. If you don't already have an HonestGamers account, you can sign up for one in a snap. Thank you for reading!

© 1998-2020 HonestGamers
None of the material contained within this site may be reproduced in any conceivable fashion without permission from the author(s) of said material. This site is not sponsored or endorsed by Nintendo, Sega, Sony, Microsoft, or any other such party. Poker Night at the Inventory is a registered trademark of its copyright holder. This site makes no claim to Poker Night at the Inventory, its characters, screenshots, artwork, music, or any intellectual property contained within. Opinions expressed on this site do not necessarily represent the opinion of site staff or sponsors. Staff and freelance reviews are typically written based on time spent with a retail review copy or review key for the game that is provided by its publisher.