This will probably be a surprise to people who didnt grow up during the 16bit era, but there used to be a time when there was more than just one big video game franchise per sport. Thats probably a simplification of the bland annual rehashing aggressively spearheaded by whatever studio EA hasnt gotten around to closing yet (thanks for the memories, Codemasters), but theres enough fact buried within to build this eventual point upon. Because there was a time before the FIFA Soccers and the PGA Tours and the like established themselves when there was room for other developers to have a go. Madden won the NFL wars because of course it did, but there was a time when NFL Quarterback Club was also in the running. It just wasnt one for long distance races; the debut games released in 1993 were pretty well received, but, by the time it was put down in 2002, it was the victim of commercial indifference and critical failure.

I guess, for my sake, its just as well the 32X version is little more than a gussied up version of the 16bit original released on the Mega Drive and SNES. Here, in all its pixelated simplicity, its not only comparable to the Madden games of the era, but goes a little further in a lot of ways. For example, it has a playbook containing over 400 plays which I might be more excited by if the extent of my tactical prowess in this sport didnt come down to trying the running plays in a random order and then subscribing hard to the first one to bring me any success. Its decent, and I could whittle away at the rest of my word count with irrelevant platitudes to that effect, but it also has a small reservoir of hooks and oddities. They all centre around the implication of the Quarterback Club moniker. 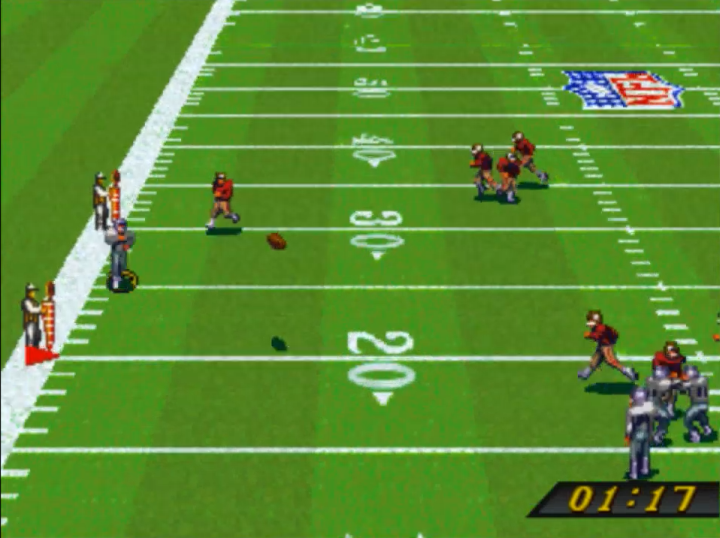 For example, regardless of what team they played for at the time of this release, the featured quarterbacks are interchangeable, letting you slot them in and out of any outfit you desire. The big hook, in this case, is the simulation options. Though NFL Quarterback Club will let you run through an NFL season or tinker with one-shot friendly matches as expected, it also lets you run through a selection of famous instances. It takes little moments throughout history, makes them interactive, and then invites you to be either the hero or the villain of the piece. You might find yourself with only ten seconds left on the clock to score a dramatic last-second touchdown in the final desperate play of the game. Or you may be tasked to try and hold on to a fragile lead for fifteen minutes against a rampaging opposition desperate to turn the tables.

Its a clever idea that was pulled off well in the 16bit version, and is pulled off with equal aplomb here on the 32X. Other modes did well on the original platform as well, like the QB Challenge feature, that presented you with things like an obstacle course to run, or a bunch of moving targets to try and hurl your ball at from varying ranges. You could even create your own custom quarterback to take part in these challenges and, depending on your level of success, slowly build his stats up to that of the featured professionals. This is not in the 32X version. At all. I suspect well never know why. 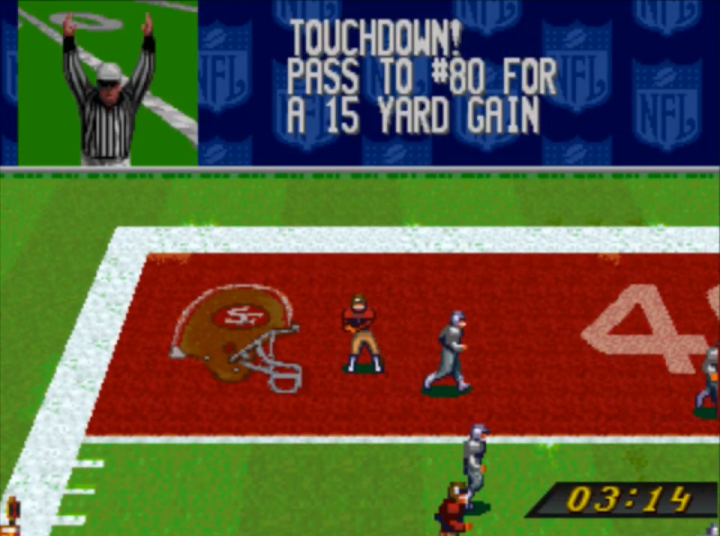 How does the 32X capitalise on all the resources freed up by dropping an entire game mode? Well, it scales noticeably better than the 16bit strain, making runs up and down the field look pretty impressive. Also, the spite animation is excellent, with charging players skidding to a halt rather than just stopping dead. Theres a lot of touchdown celebrations, too. What remains of the original game is certainly given a new level of gleam, but its missing a significant part of what made NFL Quarterback Club different from the gathering of other pig skin hurlers in the first place. I think youd probably struggle to consider that much of an upgrade.

If you enjoyed this NFL Quarterback Club review, you're encouraged to discuss it with the author and with other members of the site's community. If you don't already have an HonestGamers account, you can sign up for one in a snap. Thank you for reading!

© 1998 - 2022 HonestGamers
None of the material contained within this site may be reproduced in any conceivable fashion without permission from the author(s) of said material. This site is not sponsored or endorsed by Nintendo, Sega, Sony, Microsoft, or any other such party. NFL Quarterback Club is a registered trademark of its copyright holder. This site makes no claim to NFL Quarterback Club, its characters, screenshots, artwork, music, or any intellectual property contained within. Opinions expressed on this site do not necessarily represent the opinion of site staff or sponsors. Staff and freelance reviews are typically written based on time spent with a retail review copy or review key for the game that is provided by its publisher.