After the release of the Gameboy, it only made sense for the R&D1, the group that had developed the hardware, to support the platform with software. Starting in 1989 through to 1994, the majority of R&D1-developed games were either specifically made for the Gameboy or multi-platform titles that were designed for both the Famicom and Gameboy, often with a Gameboy-first design (such as Dr. Mario).

Prior to the Gameboy, R&D1 had worked on many early Famicom games, including many of the black box games like Excitebike, Pinball, and Wrecking Crew. Because the group shifted from Famicom to Gameboy, many iterations and improvements of their original creations ended up as exclusive to the portal system. The most famous example would be Metroid II.

Originally released for the VS. arcade system in 1984, Balloon Fight in arcades was a 2-player dual, where both players would float with balloons, flapping their arms to gain height while trying to pop the other players balloons and drop them into the water below. It borrows heavily from 1982s Joust, though adding nuance of its own, such as the ability to land and pump up new balloons. When working on the Famicom version, Gunpei Yokoi proposed a new mode, Balloon Trip, Balloon Trip, where a single player must fly through an infinitely scrolling screen, navigating sparks and hazards, and ultimately being scored by how much distance the player travelled. (The late Satoru Iwata programmed this new feature in three days.)

1990s Balloon Kid for Gameboy iteration on the Balloon Trip mode from the Famicom Balloon Fight. Rather than traversing procedurally generated hazards like the original, Balloon Kid uses carefully crafted layouts like a platformer, but with the twist of using Balloon Fights flight physics. Stages automatically scroll like they do in the Balloon Trip mode (with the exception of the occasional boss fight).

There are only eight stages, with a boss encounter at the end of even-numbered stages. Aside from a few secret bonus areas, stages are linear without few opportunities to explore or take an alternative route. The first half of the game is quite breezy, but the later levels are fiendishly difficult. Sometimes the autoscrolling feels too fast for a tight area; other times it is too slow, testing the players patience or preventing the player from escaping hazards more quickly. 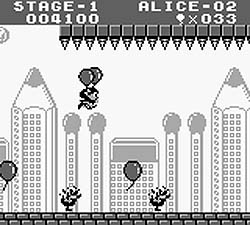 Pencilvania. I see what they did there.

Balloon Kid lacks depth or mechanical complexities, but thats OK. The fun of Balloon Kid is the joy of flying around, exploring its physics and gently navigating through the different set-pieces the player encounters. While automatically scrolling may be reminiscent of a shooter, the primary skill needed here is restraint--avoiding moving too fast or too slow, planning how to handle your momentum when quick evasion is needed. It is almost torturous how difficult sections require such slow and patient movement when decades of gaming instinct tell you to move fast and rely on muscle memory, but that kind of tension makes Balloon Kid feel all the more exciting, with white knuckles and bated breath as you float gently between two enemies. 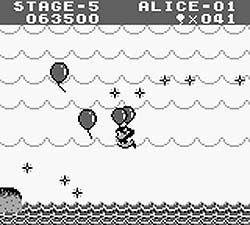 Trying to float calmly through tight spaces is an odd mix of tension and slowness that Balloon Kid does very well.

A direct hit from an enemy can be a life lost, though like the original Balloon Fight, the player can still recover from losing both balloons. Without balloons, the player can push down repeatedly to pump up a new one. A second balloon can be inflated for a little extra protection against accidentally as well. Without balloons, the on-screen action is slippery and difficult to control, encouraging the player to return to the air as quickly as possible, especially in the later stages where solid ground is a luxury.

At any time, the player can opt to let go of their balloons and let them drift away. This is primarily needed for the games four boss encountered, where players will need to do this to drop on top of their adversary. A quick player can actually let go of the balloons, bounce off an enemy, and grab they balloons before the escape, which is a skill required to overcome some of the later bosses. 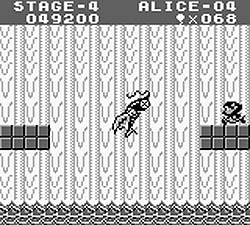 Many bosses require the maneuver of letting go of balloon, stomping the boss's head, and bouncing back up to grab your balloons.

Accompanying each level is accompanied by a fantastic and underappreciated soundtrack from Hip Tanaka. The early levels have a super chill vibe that sounds like lemonade on a spring morning. Some of the later levels have a slow, throbbing mechanical hate not unlike the depth of Zebes. The music after beating a boss in particular has a soulful melancholy that belongs in an 8-bit version of the movie Up.

Balloon Kid has the unusual distinction of being not released in its original form in its native Japanese market. In 1992, an odd thing happened. Character Soft (the game imprint of Sanrio) published Hello Kitty World, a game developed by Mario Co, Limited (which appears to be a joint venture between Nintendo and a marketing firm named Densu). Despite looking like a junky licensed title and not obviously bearing Nintendos name, Hello Kitty World is largely a Famicom port of Balloon Kid using Hello Kitty sprites. It plays the same, but has a bright and color design in-line with Hello Kitty.

Regardless of what version you play, Balloon Kid is a great, fun little game. It front-loads enough easy content at the beginning while still providing proper resistance to players looking for a challenge. The unusual mix of slow-paced, tense action is unique for games of this era, and Balloon Kid manages to pull it off, like a well crafted horror movie. Despite being relatively short (you can beat it in less than an hour--if you can beat it), its interesting design and memorable music will stick with you long after.

If you enjoyed this Balloon Kid review, you're encouraged to discuss it with the author and with other members of the site's community. If you don't already have an HonestGamers account, you can sign up for one in a snap. Thank you for reading!

© 1998-2021 HonestGamers
None of the material contained within this site may be reproduced in any conceivable fashion without permission from the author(s) of said material. This site is not sponsored or endorsed by Nintendo, Sega, Sony, Microsoft, or any other such party. Balloon Kid is a registered trademark of its copyright holder. This site makes no claim to Balloon Kid, its characters, screenshots, artwork, music, or any intellectual property contained within. Opinions expressed on this site do not necessarily represent the opinion of site staff or sponsors. Staff and freelance reviews are typically written based on time spent with a retail review copy or review key for the game that is provided by its publisher.