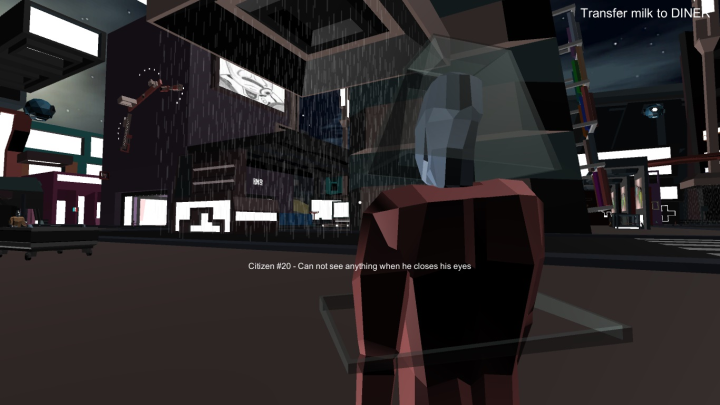 Your enjoyment of Chronicles of Cyberpunk is going to be heavily reflective of your tolerance to weird shit. Its a bizarre walking sim, made in a world that bleeds together low-poly 3D modelling and simple hand drawn animations that looks every bit as odd as it sounds. Set in the dystopian future you all expected the second you read the games title, your exploration of the world of tomorrow is going to be a challenge to describe. Youre initially asked to power up your household drone, which is found in an enclosed charging station hidden at the head of your bedroom. Just go past the digital clock that displays the time as SLEEP and ignore the holographic camera that shows a scene for the streets below of some guy apathetically stomping on another guy. The drone isnt particularly sci-fi; its more or less a refrigerator-sized block with awkward flappy panels on either side, with a busy face display of meaningless hand-drawn scrolling numbers. Power it up, and itll immediately laugh at you and make a break for freedom through your bedroom window. Youll find it in the next room over, smug about pulling another classic drone practical joke.

Later, the drone will wake you in the middle of night because your oven is trying to eat it. Later still, youll find it in the shower where it lectures you on being a creepy pervert. Later even still, you return to your apartment to discover it has let a homeless woman in, who is sitting at your table, eating cake. She tells you not to worry about the complete stranger chilling in your front room, and how you should probably just go to bed. This obviously strikes you as sound advice; you promptly go to bed.

I could list uncanny drone interactions throughout, but theres endless weirdness elsewhere. Just outside your apartment is a gang of flying kittens swarming around a robotic street cleaning machine that has declared itself an enemy of all things cat. When inside your apartment, you can tell its raining outside, but once you leave, you find the rain is artificial, emanating from several giant pipes seemingly welded to the sky. A corrupt patrolman demands someones spleen as a bribe. All the buildings have bright white nameplates above their doors, which is appreciated when youre trying to find the diner or the casino. Theres also a pedestrian who owns a nameplate that just reads Despair. Your place of work does not display a company name. It just says BOSS.

Also, your boss name is literally Big Brother, which is a little on the nose. But it does give you a good idea on what direction Chronicles is going to go in, until it doesnt. The last third of the game contains Chronicles roughest spots, including a cat and mouse chase around a confusing map where the location of the end goal is poorly explained, a trek through a winding staircase that presents little and takes forever, and the toothless attempt at implementing combat. But it also contains a ruthless and aggressive bait-and-switch tactic that cycles through all the cyberpunk archetypes with reckless abandon. It presents a rapid progression of shock twists that change the landscape of the game, then bombastically annuls them moments later with further shock twists that discredits the previous twist, or piles another layer atop a previous twist which you had recently discounted. It plays out like a self-aware M. Night Shyamalan parody script that youll either find a confusing lump of nonsense or an alluring cacophony of chaos. I did warn you that your enjoyment of Chronicles of Cyberpunk is going to be heavily reflective of your tolerance to weird shit.

If you enjoyed this Chronicles of cyberpunk review, you're encouraged to discuss it with the author and with other members of the site's community. If you don't already have an HonestGamers account, you can sign up for one in a snap. Thank you for reading!

© 1998-2021 HonestGamers
None of the material contained within this site may be reproduced in any conceivable fashion without permission from the author(s) of said material. This site is not sponsored or endorsed by Nintendo, Sega, Sony, Microsoft, or any other such party. Chronicles of cyberpunk is a registered trademark of its copyright holder. This site makes no claim to Chronicles of cyberpunk, its characters, screenshots, artwork, music, or any intellectual property contained within. Opinions expressed on this site do not necessarily represent the opinion of site staff or sponsors. Staff and freelance reviews are typically written based on time spent with a retail review copy or review key for the game that is provided by its publisher.