Narita Boy is one hell of a trip. A style-heavy combat-slinging platformer drowning in 80s kitsch and Tron-tinted neon that asks you to battle through the personified innards of a prototypic console in order to unlock the stolen memories of its creator. Its a lot of things at once, and theres always the concern that this top heavy atmosphere is going to topple over at any second. In order to avoid that, it props everything up with even more things; pseudo-religious undertones that mimic Shinto and tie in with the relaxed flashbacks of the creators memories of growing up in the Japanese providence of Narita, juxtaposed against high concept 16bit violence and CRT monitor grain overlays. Its not an invitation to get lost within the chaos; its a promise. You will spend time wandering around, hoping to stumble across the Techno Algorithm Hall or The Stable of the Servo Horse because youve found a digital key with that name on it, and have some memory of a previously bypassed pixel priest mentioning it briefly within several paragraphs of technobabble. It flirts with metroidvaniaism, making you backtrack because youve discovered a new key or a new ability that lets you circumvent a previously unpassable object. But the stages are linear, enclosed and small enough to get from one end to the other without due concern. Theyre never static; nothing stays the same long enough to get stale.

Learning new moves is often the key to accessing new areas  you learn a leaping uppercut that gives you more air than a regular jump so you can reach higher platforms, or a ground pound attack that can smash through wonky floors. But youll also need your constantly evolving moveset to deal with the ever-expanding enemy roster. Shuffling digital zombies begat hulking footsoldiers with man-sized blades begat screen-filling behemoths with oversized clubs who, even if they miss you, send dangerous shockwaves racing through the ground. Cackling electronic witches pelt across the sky, casting trails of neon napalm. Cocky guards tap their shields with their blades, mocking your impotence against their airtight defence. Except youre given all the tools you need for wholesale slaughter. Frontal attacks are useless against shields, so you learn a running shoulder barge that can knock armoured opponents off balance just long enough to land a few choice blows. Witches might feel safe, lounging about above you, trying to roast you with digital flames, but they can be reached with your new uppercut. Theyre not so fond of that. The footsoldiers need little prompting to swing their huge swords at you. Time your dodge dash to either scoot out of the way, or slip straight past them, leaving their undefended backs completely at your mercy.

You do all this with your Technosword, which you wretch free from an altar like the one true king, because of course you do. As well as everything else it has going on around it, Narita Boy invests heavily in the chosen one trope, granting the sword only to the fated hero who will save all from the twisted disposition of HIM. This isnt a bit; the main antagonist is called HIM. He used to be a supervisor program from the Red Beam before he decided that Red was much better than both Yellow and Blue, the three programs that made up the Trichroma which power the console. Its these three colours that the quasi-religion of the electronic world is based upon, and this is reflected through the games pixel-plotted landscapes. Theyre often dominated by these three tones, except for when theyre not, wherein Narita Boy does its best to be an LSD-powered heavy metal music video.

To that end, Narita Boy is never above ridiculous spectacle. Galloping at speed through a desert on a robot mount that later transforms into mech-like heavy armour, allowing you to pummel once formidable foes with spiteful indifference. Conversing with fifty-foot-tall oracles with CRT monitors for a head, cradling their bloated, pregnant stomachs. Delving through a monochrome wasteland before being assaulted by a nightmarish siren, often only distinguishable by her hugely distorted face panel, flickering between static and trichrome. Being temporarily transformed into a stag-bot so you can traverse a scared woodland. Peacefully meditating in front of an army of pulsing speakers and hard-rocking disc jockeys, or surging across the roof of a crumbling runaway train. Taking on a wireframe carp made solid in the midst of a flooded bathhouse while you surf on a 3.5 floppy disk. 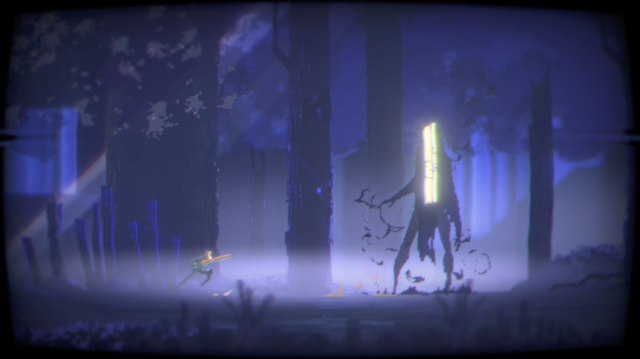 It pulls all this off because it commits hard to its slavish retro obsessions while still refusing to be governed by it. Its an old looking game, drowning in brilliantly realised pixel sprites cloaked in virtual vertical hold distortions and governed by a glorious synchwave OST that, no matter how many superlatives I throw at it, I doubt Ill ever be able to credit enough. But its not clouded by nostalgia alone; its a modern game borrowing yesteryears aesthetics, featuring such modern conveniences as a checkpoint system that doesnt actively hate you, so you never lose massive progress every time you get your digital arse handed to you. You probably wont realise this early on, when the cannonfodder cast are slowly introduced alongside the newly-acquired skills you need to destroy them, but Narita Boy will expect you to memorise these countermeasures, dropping you into the occasional enemy gauntlet and challenging you to win tiny wars of attrition. Youll find yourself eating more deaths learning tells from the varied cast of enemy boss fights. The late-game end-level fights are brutal, but theyre not unfair. Youll learn and youll evolve, slaughtering personifications of the Nintendo Power Glove or hooded executioners wielding massive sledgehammers, the heads of which are made out of VHS cassettes.

Narita Boy is one hell of a trip.

If you enjoyed this Narita Boy review, you're encouraged to discuss it with the author and with other members of the site's community. If you don't already have an HonestGamers account, you can sign up for one in a snap. Thank you for reading!

© 1998-2021 HonestGamers
None of the material contained within this site may be reproduced in any conceivable fashion without permission from the author(s) of said material. This site is not sponsored or endorsed by Nintendo, Sega, Sony, Microsoft, or any other such party. Narita Boy is a registered trademark of its copyright holder. This site makes no claim to Narita Boy, its characters, screenshots, artwork, music, or any intellectual property contained within. Opinions expressed on this site do not necessarily represent the opinion of site staff or sponsors. Staff and freelance reviews are typically written based on time spent with a retail review copy or review key for the game that is provided by its publisher.