The time that I spent playing The Bunker feels like twisted justice, because it follows so closely on the heels of my SEGA 32X review spree that no one asked for or wanted. As part of that project, I played through a lot of awful FMV games spat out on the market by Digital Pictures, and I wound up saying a lot of terrible things about those titles, things I cant take back. As a result, I feel almost like I'm making a retraction when I say something I never thought I would: the genre isn't completely without hope or merit.

Still sounding like a back-handed compliment? Perhaps it is one. The Bunker is a very smart game, but that's mostly within the context of its lamentable genre. It does away with the expected Z-list actors and hires a bunch of people youll probably be able to identify, even if you've not heard of them by name. Performers have been sourced from the likes of Penny Dreadful and Game of Thrones, but the standout enactment goes to Adam Brown. You might not recognise him, as here hes not shuffling around on his knees and he lacks a huge fluffy beard, but he would eventually appear among the dwarves in The Hobbit film series. That means hes a million miles away from the sorry cast that trundled across our screens in Corpse Killer and Slam City.

Brown tackles the role of John, a thirty-something sole survivor, tucked up in a nuclear bunker which is the only home hes ever known. Living inside this sheltered environment with little in the way of guidance or companionship has seen him grow into a sniffling man-child who reigns in his loose grip on sanity through the daily grind of unceasing routine. Brown roams the decommissioned bunker the game is filmed in with a constant grimace of anxiety and fear, making even descending some perfectly innocent stairs feel like a horrific journey. To be fair to the guy, theyre stairs hes not had to visit since his childhood. The current exploration is made necessary just now by a malfunction somewhere else in the bunker. His choices are to venture down into the forgotten depths of his home, or to stay in his little bubble and risk radiation poisoning. 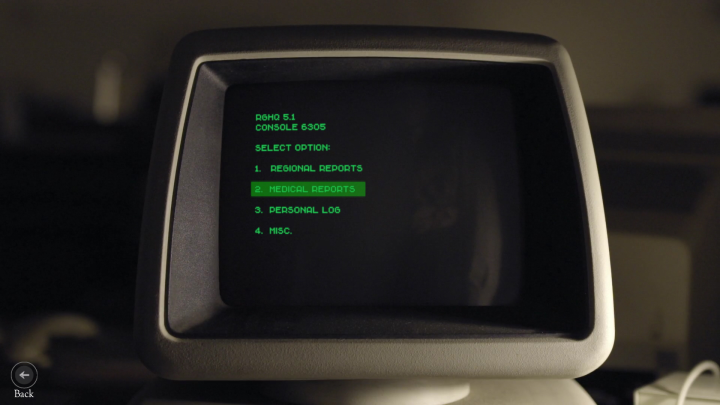 While Im not going to give anything but props to Adam Browns cringing, panicked performance, the real star of the show is the bunker itself. Draped in darkness and retro-obsoleteness, it sets the stage perfectly for the games cold-war-gone-bad aesthetic. The bunkers basic control system has been manufactured by Commodore, reintroducing those old enough to remember the name to long-forgotten blocky green text on sheer black backgrounds. Nuclear war broke out in the eighties, so those who managed to squirrel away underground are stuck with the technological trappings of their time. In promoting this, the bunker itself is a fantastic resource.

In order to stay alive, John needs to explore his environment thoroughly, glumly discovering more and more reasons to continue his descent to the lower floors. Upon stumbling into locations not visited in years, he triggers regressed memories of the bunker as it existed in his youth. People worked there. People lived there, sharing their concerns on the fate of the outside world and wondering how long their little community could hold out. As is the trend, John find most new information through little snippets of letters that were tidied away in long-forgotten draws, or on the corner of abandoned desks. Or he stumbles across items or locations that force a memory to resurface, whether hed like it to or not.

It doesnt take long before John finds The War Room. Here, on transparent charts, are maps of the United Kingdom. Checking some of these out zooms the camera in on a sharp red circle, drawn just to the south of London. Then, in the disinterested tone of someone regurgitating long-accepted fact, a female voice starts recounting the theoretical effects that a nuclear strike on that location would reap. Using just the smallest bomb as an example, she talks about the thousands that would die in the explosion, then the tens of thousands that would perish in the nuclear winds. She notes the major towns that would be wiped out in seconds from this one strike, all while the camera pans back and reveals a map that is absolutely littered with red marks. If that map is accurate, the UK has been obliterated. 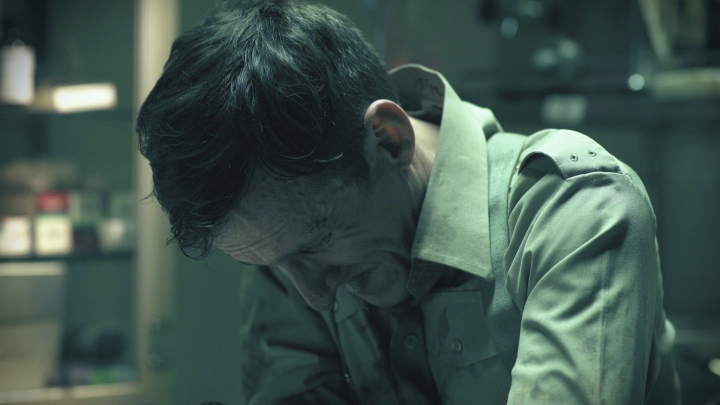 Its a sobering moment that is completely lost on John, for whom the outside world might as well not exist. All hes ever known is the bunker. His timid and frightful exploration makes even innocent shadows seem like cloaked boogeymen waiting to strike, as youre forced further and further into his terrified mentality. By the end, with fear taking over and John's tenuous grip on reality loosening, its impossible to say whats even real anymore. Through his memories and his discoveries, he becomes a reluctant narrator for the tale the bunker wants to tell.

Its a fine tale, too, one slowed down not so much by its short run-time of around two hours, but by the usual hang-ups of the abandoned genre it bravely tries to resurrect. Theres a general lack of puzzles. You're limited to rapidly clicking now and then, or dragging an icon somewhere to open something. More galling is the small collection of quick-time events that punishes failure by forcing you to re-watch several minutes of unskippable video. Thats undeniably annoying. Even by FMV adventure standards, theres a sense of inactivity that might prove a large stumbling block to many players because, well, theres not a lot of playing.

I wont say that such things never bothered me, but The Bunker provided a premise strong enough to carry my interest through the various rough patches. But then, I was always going to give this game at least a bit of a nod, just for the simple virtue of not being Supreme Warrior.

If you enjoyed this The Bunker review, you're encouraged to discuss it with the author and with other members of the site's community. If you don't already have an HonestGamers account, you can sign up for one in a snap. Thank you for reading!

© 1998-2022 HonestGamers
None of the material contained within this site may be reproduced in any conceivable fashion without permission from the author(s) of said material. This site is not sponsored or endorsed by Nintendo, Sega, Sony, Microsoft, or any other such party. The Bunker is a registered trademark of its copyright holder. This site makes no claim to The Bunker, its characters, screenshots, artwork, music, or any intellectual property contained within. Opinions expressed on this site do not necessarily represent the opinion of site staff or sponsors. Staff and freelance reviews are typically written based on time spent with a retail review copy or review key for the game that is provided by its publisher.