Nintendo has grown up in thirty years. Metroid's initial outing on the Nintendo Entertainment System filled many with a sense of wanderlust and curiosity. I wasn't one of those, though. I couldn't get over Samus' jump arc, having just recently mastered Mario's now iconic olympic style bound.

All those identical looking corridors didn't improve its chances with me, either. Was there any purpose to having a weapon that could only shoot a foot in front of her nose? Well, yes. Metroid: Zero Mission sorts you out right the beginning, with the title, in fact. Not long after that you'll be looking at a mission statement of sorts. This is her first visit to Zebes, and she's going to explain how things really happened.

The good news is that she won't be doing any explaining at all. The confines of the Game Boy Advance hardware give the developers a solid structure to play in, and they make good use of the handheld's particular talents. Detailed pixel art compensate for the GBA's power sipping nature. The soundtrack plays in short, remixed loops of the lonely, atmospheric music. Controls are super tight, but not quite as responsive as its console cousins.

Zero Mission is a welcome return of Super Metroid's best features: A status screen for Samus that puts her suit upgrades on display and a map of the areas you've explored, or revealed with map data computers. Additions like Sleep Mode and more frequent saves are vital for mobile gaming, but do make Samus' extended spelunking trek into Zebes easier to stomach if you just don't have a lot of time to spare. 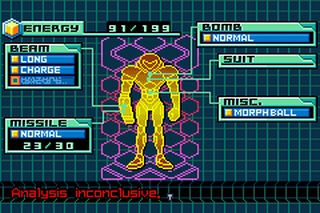 Speaking of frequent saves, Chozo statues will lend you a hand  if you roll into it like a ball  by refilling your energy and missiles. They'll also pinpoint your next destination on the map for you, though you'll be forging your own path there. They may have raised you, but you've got to stand on your own power suited feet sooner or later.

Nintendo has gone the extra mile of not only revamping the entire map, but also laying out story and upgrades to connect her to what they consider canon. The Power Grip (just shy of Glove, not by mistake) is a new ability for Samus, and it makes a number of moves effortless.

For example, Samus can grasp a ledge, haul herself up and turn into a ball if the opening is only one square tall. It's details like this that keep you wondering just where they've hidden all of those missile upgrades. If this is your first foray, there's a lot to discover, including some minor flaws.

Kraid, Ridley, and Mother Brain all make an appearance, as this is supposed to be their very first, canonically speaking. Anyone who remembers the encounters with these beasts will be disappointed with their scaled down threat. Has Kraid lost weight or is the GBA's power-limited performance? 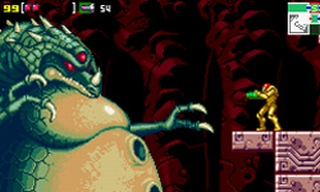 Spoiler: The latter. The GBA still can't quite hold a candle to the responsiveness of the SNES which had superior co-processors to give it a significant boost. Even on Normal difficulty, Kraid is a pushover, and Ridley is not the menace we remember from Super Metroid. Spam enough missiles and the day is yours. Mother Brain is no wilting mass of evil contention, though, so be prepared to die a few times during your assault on her... its... jar.

Tutorial's over kid. You've escaped but all is not well. Things go quite wrong and Samus winds up back on Zebes, sans power suit. A wimpy auto-charging energy pistol is all you have to defend yourself, and guess what? It's a non-lethal weapon. Stun and run, baby.

The rest of the game pits you against the space pirate mothership, inside which you sneak, skulk and otherwise hide when detected by their myriad security systems. Oh yes, and the space pirates, who can pick you off with a few blasts. Hiding spots are denoted by darker-than-normal sections of the screen, and save points are frequent enough that your many mistakes aren't likely to push your patience to its limit. 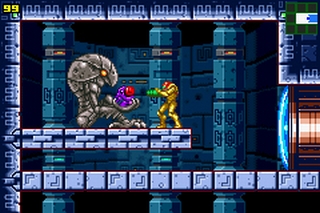 This is pretty great stuff, and it justifies the remake completely. You're going to win the day, but I'm not going to spoil how: Revenge is an ages old motivational trick, so take that as your clue. The Chozo were an industrious folk, if this retelling is to be believed. Oh, sure, why not?

Nintendo's experts have loaded up this remake of the original 'vania platformer to the hilt with curios, enigmas and twists of expectation to keep any fan intrigued. Complicated Shine Spark tricks, new upgrades in a map brought up to current gaming standards makes this one of Metroid's strongest console showings. The main adventure will keep you occupied for roughly an hour, but the real challenge is completion percentage, posted at the end of your game.

Unusual upgrade placement may catch you flat heeded, but the shift in strategy reflects the higher level of average player skill. The same cannot be said of the boss fights, only one of which is any degree of challenge. You might be irritated by all the Chozo signposting, and once again, because Metroid is a hybrid speed runner, an hour of gameplay is just that.

Laying your hands on this title is almost a matter of preference: Will you choose the Virtual Console edition on the Wii? Or will you pick up a second hand cartridge for your GBA? Once you've done that, you're free to emulate the game on nearly any device with a screen. Take your pick and get blastin'!

If you enjoyed this Metroid: Zero Mission review, you're encouraged to discuss it with the author and with other members of the site's community. If you don't already have an HonestGamers account, you can sign up for one in a snap. Thank you for reading!

© 1998-2021 HonestGamers
None of the material contained within this site may be reproduced in any conceivable fashion without permission from the author(s) of said material. This site is not sponsored or endorsed by Nintendo, Sega, Sony, Microsoft, or any other such party. Metroid: Zero Mission is a registered trademark of its copyright holder. This site makes no claim to Metroid: Zero Mission, its characters, screenshots, artwork, music, or any intellectual property contained within. Opinions expressed on this site do not necessarily represent the opinion of site staff or sponsors. Staff and freelance reviews are typically written based on time spent with a retail review copy or review key for the game that is provided by its publisher.