ORBIT is the latest release from RCMADIAX, a publisher that has for the past few months delivered a budget-priced Nintendo eShop game or two virtually every week. There's a reason for that prolific and affordable output: none of the games seem to be particularly ambitious.

In ORBIT, you play as an arrow that makes orbits a central orb. I assume the orb is a planet and the arrow is a satellite. Small red balls fly in from the sides of the screen, one or two at a time from random directions. As you fly, you can tap the screen to leave a trail of blue behind you. If the incoming red balls (which I take to be meteors) collide with your blue shield, they disintegrate harmlessly. If some of them slip past your shield a few times, you lose. Your goal is to get the highest score you can manage before that happens. 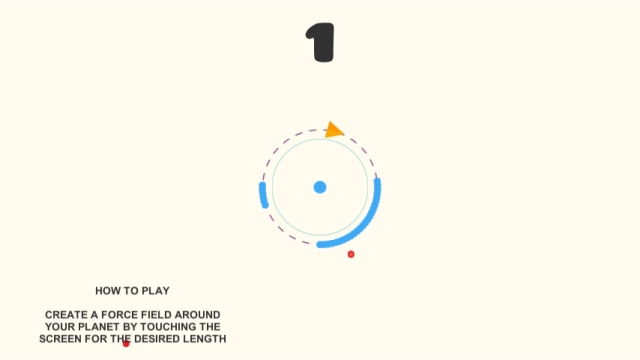 The entire experience, from interface to gameplay, is managed with stylus taps. You tap the text to begin a new game from the title screen, and you tap and hold your stylus against the screen to produce the aforementioned blue shield trails. There are no other input options. If you want to pause the game to wipe your nose or answer the phone, you're out of luck. Accept your loss and start over, if you dare!

Once you've played ORBIT for a few seconds (long enough to get the hang of things, which may actually take a couple of attempts), you've seen everything it has to offer. You've also heard everything, because the game features literally no music or sound effects. On close calls, you have no way of knowing if you've dodged a bullet or taken one of your three available hits.

Although game difficulty does seem to increase slightly a short way into the proceedings, it doesn't steadily ramp up as you progress further from that point. By the time I blocked 150 or so of those vicious red balls, I had settled into a groove that wasn't interrupted until finally I said "Enough of this" when I passed 500 points and just sat there until my planet was finally destroyed by incoming meteors. There were a few close calls along the way, but I always had ample time to set up a shield in advance of a meteor's arrival. You can't set a trail in a complete circle, but you have sufficient energy to cover around three fourths of the radius at any given point and that's much more than you should ever really need. 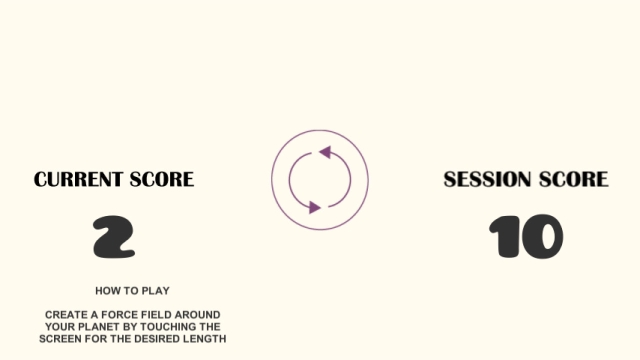 When you finally lose, the game retains your score for that session only. You can try again and maybe beat said score, but there are no leaderboards that might let you compare your performance against any posted by other players. Your session score is also erased when you exit the game, so you can't even fire it up later and invite a friend to do better.

"I don't believe you," your friend says. "No one would willingly waste that much time!"

And then you hang your head in shame and shed a single tear, because you did precisely that. Don't let such a tragic scene unfold in your life. Don't play ORBIT and then try to boast about your score. It's a safe bet no one cares.
1/5

If you enjoyed this ORBIT review, you're encouraged to discuss it with the author and with other members of the site's community. If you don't already have an HonestGamers account, you can sign up for one in a snap. Thank you for reading!

© 1998-2020 HonestGamers
None of the material contained within this site may be reproduced in any conceivable fashion without permission from the author(s) of said material. This site is not sponsored or endorsed by Nintendo, Sega, Sony, Microsoft, or any other such party. ORBIT is a registered trademark of its copyright holder. This site makes no claim to ORBIT, its characters, screenshots, artwork, music, or any intellectual property contained within. Opinions expressed on this site do not necessarily represent the opinion of site staff or sponsors. Staff and freelance reviews are typically written based on time spent with a retail review copy or review key for the game that is provided by its publisher.