8Doors periodically kicked the shit out of me. Mainly through its old-school implementation of boss fights you dont just have to beat; you have to study. You should expect to die the first few times while you learn their attack patterns, or the tells they broadcast before launching into a particularly gruesome bout. Take Daredemian; this tree-based deity sits in front of a burning garden, wrapping himself around the few saplings that have thus far survived the blaze. He wont stay there forever, and will periodically burrow underground to sprout back up on the other side of the garden and pelt you with attacks anew. You need to get close enough to pummel him to death, but hes not keen on that idea, so hell scatter burning seeds into the air, or summon pointed root columns to erupt from the earth in an attempt to spear you. But everything he does is telegraphed; for example, sometimes hell elongate his fingers and spike them into the ground. Its a mid-range attack, meaning just scooting back a little will still get you hurt. You need to decide how youre going to evade as soon as he rears his hands back to ready the strike. But dont get it confused with throwing his hands up! If he does this, hes about to pull a nasty close range attack using a sudden burst of thorny brambles. 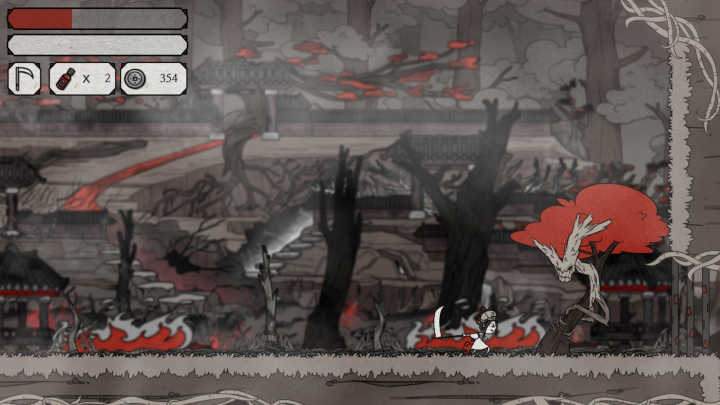 Learning boss attack patterns and figuring out pesky tells arent anything new and have been a part of video gaming since time immortal. So have games being difficult, even if its becoming more and more of an antiquated design model. Theres nothing wrong with kicking a gamers arse, but the trick is not to make it seemingly insurmountable. The player needs to see a way through the obstacle and that victory is obtainable. I bring up this little side tangent because I ate uncountable deaths during my slog through 8Doors and, while I certainly wasnt immune to the occasional pad throw and rage sulk, I could always see what I had done wrong, how I could have avoided an attack, or how I had invested too heavily into offense to defend myself correctly. I went back, I learnt from my mistakes and I evolved.

Overcoming the various humps sadistically dropped in your path, therefore, becomes immensely rewarding. But this isnt limited to getting your face caved in by the big boss battles; you also have to drag yourself there in the first place. 8Doors is one of those Metroidvania things, where getting yourself from A to B is a constant struggle. Routes are often blocked by seemingly impassable stretches that can only be overcome later in the game once youve obtained better equipment or hardier skills. This means much of the game is based around exploration; feeling out the world around you, pressing as far forward as it allows you, and backtracking to once unreachable areas once you have discovered the means to progress. Unfortunately, while doing so, you have to endure the double-punch combo of a hostile landscape and a rogue's gallery of bloodthirsty devils. Because, turns out, youre literally in Hell. 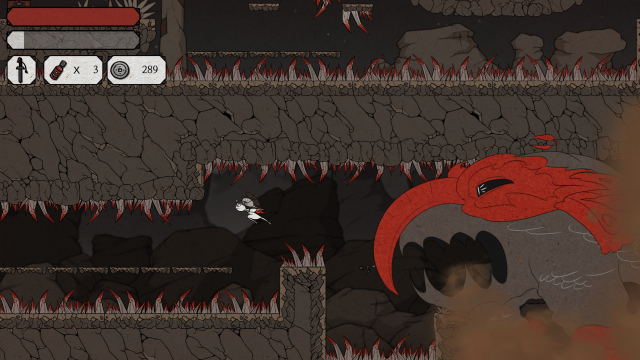 8Doors, or, to give it its full name, 8Doors: Arum's Afterlife Adventure is a game that has you exploring purgatory, based on Korean folklore. Trying to reunite with the soul of her father, Arum finds passage into the afterlife to discover things there arent quite right. Theres an influx of souls that the various afterlife departments cannot keep up with, with a lot of them being undocumented. Turns out, Korean purgatory is brilliantly bureaucratic, with different offices dealing with things like how to collect souls, how to judge them on the life theyve lived, and what to do with them afterwards. But, sometimes, souls slip through the cracks and go feral. They now roam purgatory, waiting to murder anything that crosses their path. Theyre usually kept in check by the Guardians of Death, reapers of sorts born from reincarnated pure souls, but the unexpected wave of new work has them swamped. Partly in a desperate attempt to bolster numbers and partly in a genuine attempt to help Aram on her quest, shes adopted as a temporary Guardian, giving her access to various parts of purgatory that would be otherwise closed to her.

Armed with Ducroak, a frog familiar who wears a floppy hat and sits on her head, she wanders out into the underworld, foraging for clues. Soon, she has to lean on her amphibious chum for more than directions, though; the first ability you unlock turns him from passenger to mount, his larger form allowing you to move heavy blocks or traverse large bodies of water. Youll need this to gain access to what becomes your adventures main hub: The Death Tavern. Traditionally, its the place where departed souls can spend their last night before theyre ushered into the courtrooms to await judgment, but it has a number of other uses. Its where the death guardians hang out between missions, for one, so its full of people happy to explain the numerous offices and functions of their purgatory during their, ahem, dead time. It also houses the Guardian of the 8 Doors, someone who can manipulate both space and time. Mainly, youll use him to teleport into set checkpoints (the 8 doors, no less) across the hellish purgatory landscape to save yourself some measure of backtracking. Hes pretty great and powerful. I know this, because he reminds you about it every time you visit. 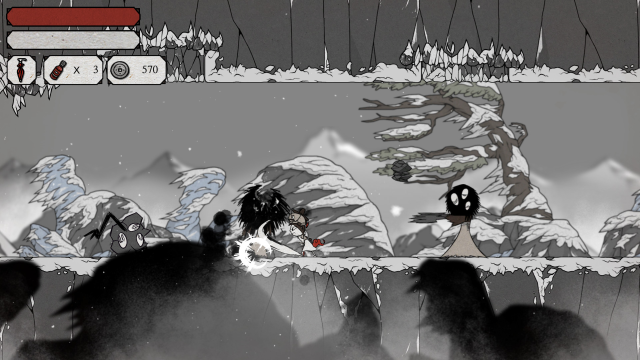 It also has a shop where you can bolster basic stats, or upgrade your Dark Souls-like flask that offers limited swigs which tops up flagging HP values. Theres a room in the basement where you can deposit wayward souls found out in the plains and harvested before they could turn feral. Collecting these souls offers you rewards which you can spend on further abilities, like fortifying Ducroak against poison, adding an extra swig to your flask or automatically collecting the spoils of a successful battle. But finding them isnt always easy, and 8Doors hides a lot of secrets behind fake walls, hidden pitfalls and blocked access points. You can find chests filled with gold, or the tombstones of fallen guardians that serve as either checkpoints or stat gains, or hidden bosses formed from souls too long lost in the wilderness. All youll need to do to access some of them is survive a series of wall dashes, or skip across a bed of spikes, or navigate through a pond of mammoth icebergs or

For as much as 8Doors kicks your arse, and as much as I was driven forward out of a combustion of spite against the world that killed me, and the delicious ego-boosting gloating that came with overcoming it, it was perhaps the exploration that drove me the most. Displayed in only monochromes and red, the folkloric lands of the dead always had some new sight or new secret to uncover. You can access the sewers in the first few hours of the game, but your limited vision makes you easy picking for the homicidal monsters that lurk there.

You can only properly explore it much later in the game when youve discovered a lamp staff, so it sits at the back of your mind, tauntingly. Slog your way up the summit of a mountain, and youll find the recent carnage of a concluded battle; an impossible serpentine carcass wound though the peak and an angry sumo pig-man demon to try and vanquish. Pick your way through a winding forest, using thorn-shedding plants to avoid the misty swamplands below and it eventually breaks into a picturesque plateau. Its complete with a steep waterfall spilling into a clear lake where a fish-headed humanoid sits and complains about how youre ruining his tranquillity. Possibly in a transparent attempt to get rid of you, he advises you need to ascend through the swamps to the sacred gardens, where lost souls sometimes gather in the hopes of obtaining the ingredients needed for resurrection. It seems as good a lead as any, so you start the treacherous climb. Only, when you reach the gardens, theyre already ablaze. Theres little time to worry about that, though; from the earth sprouts Daredemian. He wraps himself around one of the few unburnt trees and proceeds in periodically kicking the shit out of you. Better get to work on learning those tells.

If you enjoyed this 8Doors: Arum's Afterlife Adventure review, you're encouraged to discuss it with the author and with other members of the site's community. If you don't already have an HonestGamers account, you can sign up for one in a snap. Thank you for reading!

© 1998-2021 HonestGamers
None of the material contained within this site may be reproduced in any conceivable fashion without permission from the author(s) of said material. This site is not sponsored or endorsed by Nintendo, Sega, Sony, Microsoft, or any other such party. 8Doors: Arum's Afterlife Adventure is a registered trademark of its copyright holder. This site makes no claim to 8Doors: Arum's Afterlife Adventure, its characters, screenshots, artwork, music, or any intellectual property contained within. Opinions expressed on this site do not necessarily represent the opinion of site staff or sponsors. Staff and freelance reviews are typically written based on time spent with a retail review copy or review key for the game that is provided by its publisher.