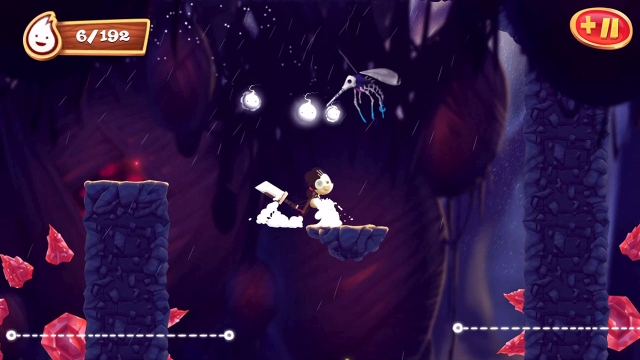 I'll admit it: I took a chance on Spirit Roots because I thought it would be mediocre at worst. When I perused its Switch store page, I thought, "Here's a nice, run of the mill platformer that'll allow me to shut my brain off and recharge for an afternoon or two." So I went in my usual low expectations, hoping for basic platforming and indie charm to knock out a few solid hours of my free time.

And for a while it did the trick. For a while...

This game doesn't break any new ground. You venture through numerous, straightforward stages and nab cute little spirits while avoiding obstacles. As with any game of this nature, you encounter plenty of spikes, moving platforms, falling icicles/stalactites, and booby traps triggered by floor plates. Meanwhile, a whopping two different types of foes try to bite into your adorable, mascot-like flesh. One creature usually hits you with a ranged attack, forcing you to fire your gun to take it out. The other possesses bullet-repelling shields, but easily falls to repeated sword swipes. While the bestiary remains limited throughout the experience, the not-so-staggering two monsters you slay (who see constant reskins with each new world theme) at least fill a void.

You begin each affair with three lives, and taking any damage at all subtracts one. However, you get them all back when you reach a checkpoint. The only catch is if you "game over" at any point, you have to take the whole level from the top. That doesn't present a problem, really, because over half of the campaign consists of incredibly easy, basic content with obvious solutions. For the most part, you run afoul of straightforward arrangements of enemies and traps, and few segments require you to critically think or form a strategy. Again, configurations like this are ideal for anyone looking for a uncomplicated adventure with low demands. 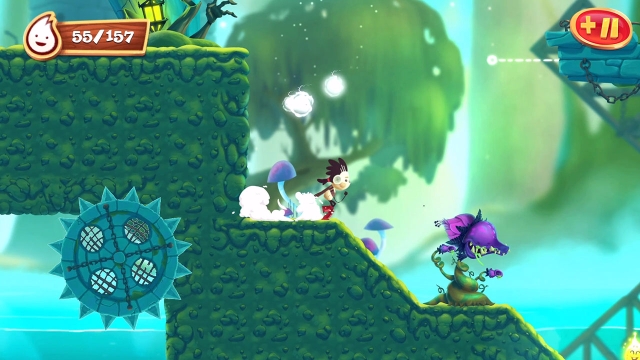 Unfortunately, Roots' simplicity shouldn't be taken as a sign of flawlessness. Sure, it sports solid mechanics and terrific control response, yet it occasionally still finds ways to test your sanity. For one thing, plenty of levels feature points where you need to drop off a platform, but you can't see what lies below it. At that point, your only option consists of taking the plunge and hoping your feet greet solid ground and not a horrible, impaling death on spikes. Sadly, sometimes it's the latter that's waiting for you below. In other instances you'll pull yourself up onto a lofty platform or plateau, only to get a faceful of projectile from an enemy you couldn't possibly have known was there.

Here's the thing, though: no matter how bad it gets, Roots remains ridiculously easy. A lot of the hazards you encounter appear to be part of the environment, and you don't realize they can kill you until you run headlong into them. In most cases, this would be a damning flaw. Here, though, you learn to roll with the mostly ineffective punches. One patch of questionable stage design usually costs you one life, and you learn to deal with the issue in future attempts.

Even when you encounter hit detection issues, it's not that big of a problem. While taking on the close-range monsters, you might notice your sword pass through them without drawing any blood. Likewise, they sometimes leave you unscathed when your just watched their claws rip right through you. Hell, if you're lucky, you might even get the rare circumstance where a single one of your slashes registers twice for no particular reason. None of these botches bother you at first because they don't affect your performance and you're ultimately still able to slice through most of the campaign without trouble. 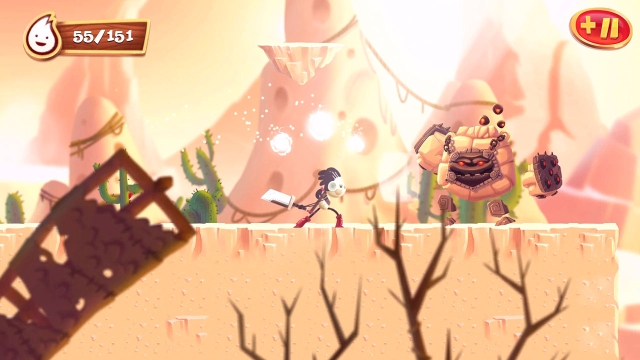 And then the worst possible level theme arrives, just in time to ruin the mediocrity.

With every fiber of my being, which survived platformers from the '80s and '90s, I absolutely despise ice-themed levels, and Roots only serves to remind me why I do. Take every benign issue I listed above and multiply them by one hundred, and you've got this adventure's ice stages. Here, you occasionally slide on slippery surfaces you can barely see. They often crop up out of nowhere, because they blend in with the environment so well. During my own playthrough, I had to squint to notice them when playing in portable mode.

Now and then, you only realize you're on a slick surface after careening into an obstacle and dying. Even worse, some of the massive spiked balls and other gadgets put in place to kill you sometimes annihilate you by simply grazing you. Suddenly, hit detection isn't "not that big of a problem" anymore. Oh, it gets worse, because of course it does. You also bump into killer ice crystals that shoot frosty beams. Half of the time, you smack right into the crystals themselves because they appear to be part of the background. Worse than that, you often perish via ice laser you thought you'd evaded. Despite seeing a very clear, large gap between you and the edge of the shot, the blow registers and you croak, coming away from the exchange feeling cheated after a lot of hard work.

Sometimes you practice like mad to get through one segment of an icy level, only to encounter a section that's ten times more difficult. You lose all of your lives, and then repeat the first harsh gauntlet again, only to "game over" repeatedly. Eventually, you persevere and get through that second portion, only to face an even worse third act. 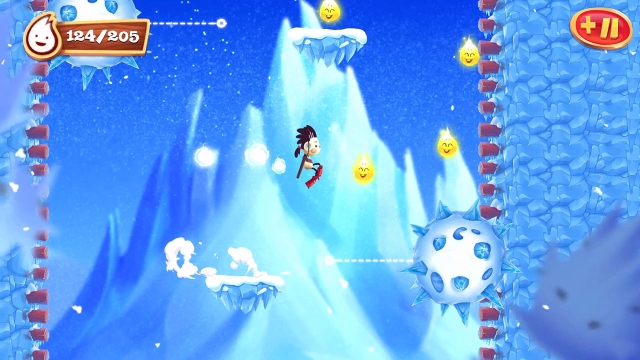 At that point you ask a very important question: does Spirit Roots offer enough compelling material to make braving the tundra worthwhile? My answer is an emphatic "no." If nothing else, the game teachers one important lesson: that elevated challenge factors don't magically improve generic or broken platformers. I used to live under that assumption, and this title helped me to update that faulty bit of reasoning.

I went into this experience expecting average content at worst. Instead, it turned out to peak at "average," and grew unpalatable when it tried to hang with the super-tough platformer crowd. That's when the game became yet another cautionary tale for low expectations, once again reminding me that I should be a bit more discerning when selecting lesser known titles. They can't all be Goblin Sword or Daemon Detective Gaiden, after all...

If you enjoyed this Spirit Roots review, you're encouraged to discuss it with the author and with other members of the site's community. If you don't already have an HonestGamers account, you can sign up for one in a snap. Thank you for reading!

© 1998-2021 HonestGamers
None of the material contained within this site may be reproduced in any conceivable fashion without permission from the author(s) of said material. This site is not sponsored or endorsed by Nintendo, Sega, Sony, Microsoft, or any other such party. Spirit Roots is a registered trademark of its copyright holder. This site makes no claim to Spirit Roots, its characters, screenshots, artwork, music, or any intellectual property contained within. Opinions expressed on this site do not necessarily represent the opinion of site staff or sponsors. Staff and freelance reviews are typically written based on time spent with a retail review copy or review key for the game that is provided by its publisher.