Toree 3D is a 3D platformer that costs 33 cents per D. It has nine levels, so 11 cents per level. And can be finished in about 30 minutes, so 0.056 cents per second of playing. Basically, what I'm trying to say here is that this is not an epic game, but at least they are upfront about it.

But instead of lamenting what it isn't, let us appreciate what it is. It's a dirt-cheap 3D platformer... with solid controls. That can't be emphasized enough; this game feels as good to move around in as any halfway decent full length game does. And honestly, that's something you don't expect from these sorts of budget titles. Yes, the moveset is limited - jump, doublejump, walk, run - but it has a sense of speed to it and the actions feel fluid and responsive. Your jumps have enough distance to allow platforms to be nice and far apart, and your range is enough to allow you to experiment with cutting corners or launching earlier than what might seem appropriate. Little Toree feels fun to control even if he can't do much. There's also a full 3D camera control that doesn't get in the way of the action. Even if it's not complex, getting the feel of the running and jumping right is so critical to a platformer, and Toree pulls it off.

Likewise, the level design is... not bad either, even if there isn't much. There's four themes (rooftop, sea, ice, highway), each repeated twice, and then a final level with elements of all four but still distinctive in style. Each theme has its own thing going for it, like swinging girders on the roof or cyclones at sea or jumping from truck to truck on the freeway, so each feels fairly unique. They are all linear, each completed within 2-3 minutes your first time around and 1-2 minutes if you know what you're doing, so they aren't crazy long. I'd say "or crazy difficult", but honestly it's not even modestly difficult. But they have repeated elements with variations on a theme to give the levels cohesive structure, and the nature of the paths basically allow for fun maneuvering to see how far you've come or allow you to see the level in a different light from a different angle. The first sea level, for instance, spirals around and ends at an elevated platform looking down at where you were, revealing what you were spiraling around if you didn't take the time to look earlier. I didn't, so seeing that at the end was really cool. 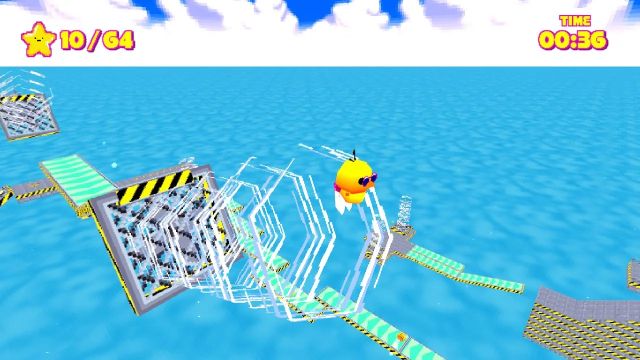 I would say that the game was also made to allow you to casually jump your way through the first time, but there is some challenge if you try to speedrun it. And there is an incentive to, as you need to get an A rank on all levels to unlock the final character (to say nothing of the S rank as well). And you can tell some thought went into it. There are obvious points where you have to time everything just right in order to skip one platform, a maneuver that could pay off and shave several seconds off your time. So there is incentive to replay these levels too, which doesn't feel frustrating to do since they only take a minute or so anyway.

And despite its obviously mid-90s inspired look, it has its own unique style and charm, even if it is rather weird. It seems bright and cheerful, albeit perhaps a little too pastel-ish. You play as a cute baby chick with sunglasses and a backpack, and the plot (if anything, there are absolutely no cutscenes) appears to be that the grim reaper stole his blurry low-res ice cream and he wants it back. For as silly as this seems, it also has a bizarre yet tongue-in-cheek horror element. Those giant stars in the background with their Kirby-esque smiley faces? Every once in a while the music will freak out, the game get darker, and the star face turns into a nightmare. Or as you climb a hill, a giant, gaping maw will slowly come into focus. It's not scary of course, but it's just weird. The combination of the cute and the faux horror works to give it its own identity despite the lack of story or content.

A lot going for it, don't you think? Of course, it is still just a 99 cent game, and the limitations are also obvious besides the 30 minute runtime. You'll note I didn't mention a thing about enemies; that's because they are so simplistic they are barely worth a mention. Bees will go back and forth, and there's only one other enemy but I don't want to talk about it so as not to spoil the surprise (but other than the surprise, there's nothing else interesting about them). No boss fights of course; your ice cream is just sitting there for you at the final level. There are collectible stars in each level, but sadly they were not of any interest. Only one group of them was even mildly hidden, and only a couple other times were they placed in an area of any challenge. So it's mostly a mindless endeavor to grab them all rather than a fun alternate method to play the level. And for that matter, there's just some basic little things missing. It's cool that you get a ranking based on your time for each level to encourage you to speedrun, but it doesn't actually save your time for you. And while there are multiple characters to unlock (one with infinite jumps, another crazy fast), I honestly don't think you can switch characters without exiting the game and restarting!

So on the one hand, I applaud what has been done here. The hardest part - the controls - was nailed, and there's elements of strong level design and theming going on here. But at the same time, this is too simplistic to extend much beyond what is actually present. Yes, the controls are great, but they are basic, far less than what you get with Mario or Hat Kid or whatever. Yes, levels are unique with decent platforming, but they aren't challenging and don't have a variety of platforming. And what few enemies are present act only as other obstacles rather than anything with a unique AI. I said I wouldn't lament what the game isn't, and I honestly don't. I'm glad Toree exists even if it does feel more like a demo than a full game; there aren't enough good 3D platformers in the world so the demo still is appreciated. And it's fairly priced for what it is, but I hope that the developer can expand on the concept and can make a $5 or $10 or even $20 game with the same care. Because that would really be something.

If you enjoyed this Toree 3D review, you're encouraged to discuss it with the author and with other members of the site's community. If you don't already have an HonestGamers account, you can sign up for one in a snap. Thank you for reading!

© 1998-2021 HonestGamers
None of the material contained within this site may be reproduced in any conceivable fashion without permission from the author(s) of said material. This site is not sponsored or endorsed by Nintendo, Sega, Sony, Microsoft, or any other such party. Toree 3D is a registered trademark of its copyright holder. This site makes no claim to Toree 3D, its characters, screenshots, artwork, music, or any intellectual property contained within. Opinions expressed on this site do not necessarily represent the opinion of site staff or sponsors. Staff and freelance reviews are typically written based on time spent with a retail review copy or review key for the game that is provided by its publisher.