Space Mouse is almost as old as I am. When the game was originally developed and released in Japan in 1981, I was... well, I don't remember what I was doing. I was two years old at the time, you understand. That means that I was most likely taking kettles out of the cupboard, spreading them across the floor and banging on them like drums. My mom says I used to do that a lot in my early years.

My point is that I was oblivious to the game's existence, and the medium has come a long way in the decades that followed, as my awareness evolved. As a result, about all I can do today is play Space Mouse 35th Anniversary Edition and think that I might well have enjoyed the original version, if only I had been old enough to appreciate such things at the time and had access to them. Here in 2016, though, I'm not sure I ever had a shot at truly enjoying the game (as much as I might wish otherwise). I can appreciate what it accomplished at launch and I can be grateful that someone took the time to put together what seems like it must be a terrific port of a forgotten classic (always a worthy endeavor), but that's the extent of it. 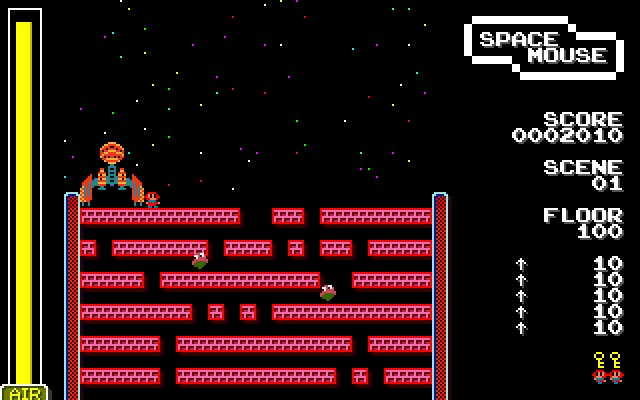 The idea in Space Mouse is that you are a feline astronaut, scaling skyscrapers to reach a rocket ship that waits somewhere just above the top floor. This feat you must manage before you run out of oxygen, and while avoiding aliens that rain down from above and then scurry along the girders like mice. Maybe they are mice? It would explain the title, at least. Let's call them alien mice.

You start out with five lives, which sounds like a generous supply, but lives can slip through your fingers like water through a sieve. Just after you materialize, the first of the mice start dropping, and a collision with any one of them will typically lead to your demise (unless you pick up a power-up that temporarily allows you to break through bricks and adversaries, like Pac-Man after eating a power pellet). There's usually not a lot of room to move, so you have to rely on your one advantage: any mouse that encounters a hole in the floor will always drop through it and quickly out of sight, which gives you time to dash to your next place of refuge and play the waiting game again.

By default, the game activates something called "move adjust," which ensures that when you climb up one level, you'll start to scamper left or right toward a nearby opening. This may strike you as a useful innovation, since a quick ascent is one of your critical objectives, but I found that it often made me climb even faster than I wanted to, usually leading me to rush into the waiting arms of an alien mouse. Another consideration is that as you scale the building, there is loot lying around, including money and keys that grant access to recesses that contain still more loot. You want to grab those items, but with move adjust enabled, it's far too easy to dash right past them. Then the goodies just sit there, taunting you, because you can't drop back down. 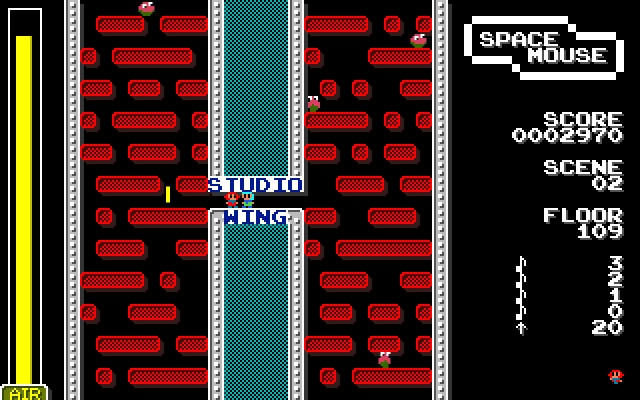 As you can imagine, I disabled that particular assist. And I played around in the settings for other reasons, as well. You can enable or disable frame skip, switch resolutions or play in full screen mode, and also adjust the background music and sound effects. More interestingly, though, it's possible to switch between five versions of the game. Each one offers different visual and aural effects, and even alternate navigation menus. They're complex skins with a few bonus perks, basically.

By default, Space Mouse invites you to play in the NES LIKE Arr. mode, which resembles a very early, very basic NES action/puzzle title. The sound effects are pretty good, the music bright and cheery. Hands down, this is the most pleasant way to play. I can see why it was the default for this release.

If you want to try something a little different, however, you can instead go for a PC-8001 edition, or an MZ-700 one, or variations on those. I tried those other arrangements and immediately regretted my decision. The blob-like mice are replaced by playing card icons, or by similar simple sprites, and the sound effects are much louder and decidedly more obnoxious. The game really shows its age, and play control feels excessively jerky. I can only assume that when the game first arrived on the scene, that's how it looked and played. 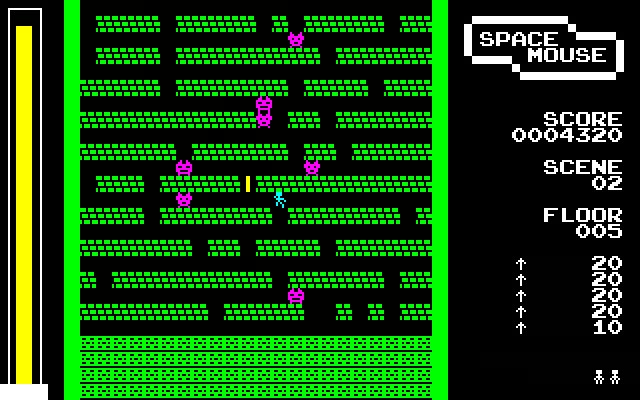 Whatever version of the game you play, you have two perfectly viable control options. You can use the keyboard, which mostly comes down to the arrow keys and space bar, or you can plug in a controller. I tried my luck both ways and found that I preferred the keyboard. When I used the trusty Xbox 360 controller I keep around for such a purpose, I was forced to use the analog stick (the d-pad does absolutely nothing), and movement just didn't feel quite as precise. But it's not like the cat moves exactly where I want it to in either case. Space Mouse is a fast-paced action game without time for pussyfooting around.

My biggest problem with Space Mouse isn't any of the minor stuff I mentioned above, though. Rather, it's the sense of repetition that quickly sets in and then hangs around, like a soggy spinach leaf dangling from a plate of pasta that you're eating at a fancy restaurant for some reason. There's not a lot of room in the premise for anything interesting to happen, or for play to evolve much, because you're too often forced to hurry up and wait. There aren't any leaderboards so you can convincingly gloat to your friends when you manage a superior performance, either (though the achievements might work for that). I appreciate that playing the game earned me some apparently uncommon Steam trading cards, and the exposure to a really old action title that I hadn't experienced before was welcome. Such incentives only go so far, though, and they weren't enough to tempt me to keep playing for hours on end, the way the best retro titles do.

If you loved playing Space Mouse back in the day and you want to experience it all over again, this new release is almost certain to prove worth your while. The attention that went into faithfully bringing the classic game to new hardware is laudable. I just wish that the effort had been devoted to a game that I might personally find more rewarding. In the end, for me, the package feels like much ado about relatively little. It's considerably better than banging on kettles, though.
3/5

If you enjoyed this Space Mouse 35th Anniversary Edition review, you're encouraged to discuss it with the author and with other members of the site's community. If you don't already have an HonestGamers account, you can sign up for one in a snap. Thank you for reading!

© 1998-2020 HonestGamers
None of the material contained within this site may be reproduced in any conceivable fashion without permission from the author(s) of said material. This site is not sponsored or endorsed by Nintendo, Sega, Sony, Microsoft, or any other such party. Space Mouse 35th Anniversary Edition is a registered trademark of its copyright holder. This site makes no claim to Space Mouse 35th Anniversary Edition, its characters, screenshots, artwork, music, or any intellectual property contained within. Opinions expressed on this site do not necessarily represent the opinion of site staff or sponsors. Staff and freelance reviews are typically written based on time spent with a retail review copy or review key for the game that is provided by its publisher.