Okay. So imagine a mashup of steampunk, sci-fi and western, in a universe where humanity has been obliterated and the only people left are robots. Sort of like a post-apocalyptic Firefly, except that Nathan Fillion's character is a robot, and also a woman, and... Following me so far? Okay, good. Add in some light RPG elements and some XCOM-style combat, and that's basically Steamworld Heist in a nutshell.

This game is the ostensible sequel to Steamworld Dig, although I cannot say how closely the two are related, as I have not played the former. At any rate, it does not seem like one needs to play Dig to understand Heist, as the scenario is simple enough. Earth has been blown to bits in some kind of cataclysm and only robots have survived. For some reason, coal-fired steam is still a tenable energy source, and thus water is the universal currency. The exception to this are the diesel-powered Royalists who believe that steambots are inferior and haughtily lord over the remaining shards of Earth and all of its drilling rights like a big bunch of bullies.

Enter Piper Faraday, a swashbuckling steamgirl with a heart of gold. She's an honourable thief who is just trying to make ends meet. She does this by raiding ships and starbases (committing "heists", if you will) at the outskirts of known space. However, she has plenty of competition, as the outskirts are a rough neighborhood populated by pirates, scavengers and ne'er-do-wells of all sorts. Over the course of completing various jobs, she will kill many of these lowlifes, accumulate plenty of their loot, hire more allies to join her crew, and occasionally find some time to kick back at the local space taverns. 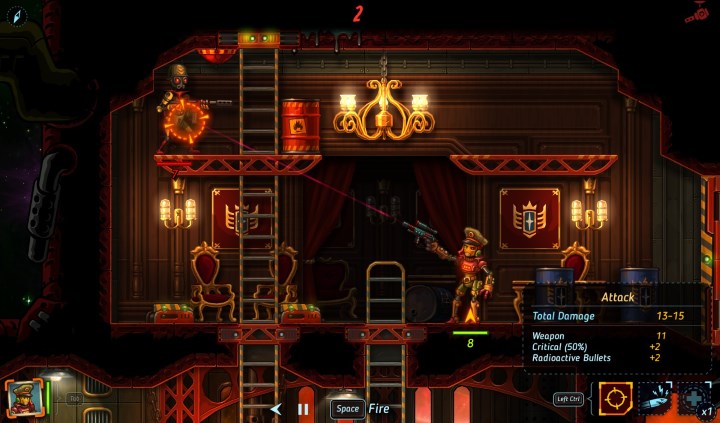 The story here is actually quite thin, though. All three acts of Steamworld can be basically summarized the same way: A certain group of enemies are causing trouble, so kill a lot of them, steal their stuff, and then eventually kill their boss. Then you find out that there is an even bigger, badder bunch of enemies in the next sector who also need to be dealt with, so you kill a lot of them, steal their stuff, and eventually kill their boss. Then you rinse and repeat. The repetitious nature of this might've gotten on my nerves if not for the strength of Steamworld's characters, all of whom are very well-written and designed. They have unique personalities, interesting backstories, and they react appropriately to unfolding events. The allies aboard your ship will even argue and bicker amongst themselves from time to time. The tone is decidedly lighthearted for the most part, with plenty of jokes and tongue-in-cheek humour abound. Somehow, altogether, it works.

But you're not here for the story anyway, and Steamworld's gameplay is where it really shines. It is sort of a two-dimensional derivative of XCOM, with the biggest difference being that there is virtually no RNG whatsoever. You must line up every one of your shots manually, and if you miss, it's probably your own fault. There are certain weapons that have laser sights to make this easier, but most of the time - especially with arcing weapons like grenade launchers - the difference between a hit and a miss is entirely up to you. Timing is also important, as your robots' aim is not 100% steady, so even if you have a target squarely in your sights, you might want to wait for the exact right moment to pull the trigger. It is also possible to ricochet your shots off walls, ceilings and basically any surface, which can be extremely useful, especially when you manage to bypass an enemy's cover and hit him squarely in the back of the head. 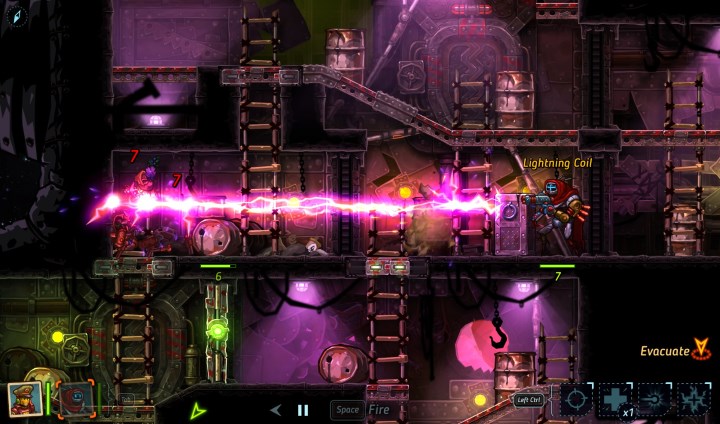 And much like XCOM, strategy and positioning is key. Even if you are playing on lower difficulty levels, your robots will likely get killed if they are left out in the open. They only have about as much health as the enemies do, and in most cases the enemies will outnumber them five to one. Healing items are hard to come by, and death comes quickly if you're not careful. It is possible to tell your robots to "guard", but this doesn't give them a bonus to their evasion - there is no evasion! All it does is make them crouch. Thus, close attention must be paid to the physical space that your robots occupy and how much cover they have in relation to the enemies' line of sight. Generally speaking, bigger cover is better, though sometimes it can pay off to simply bum rush an enemy and take them out at point blank range. There's a bit of a risk/reward mechanic at play here.

Thankfully, Steamworld is not as punishing as XCOM, so if one of your robots dies, they will simply be rebuilt and available for use in the next mission. However, you will lose some reputation points, and depending on how many reputation points you need to advance the story, you might need to redo some of your previously completed missions. This is generally fine, as it is sometimes necessary to grind for loot anyway, and you do this by replaying previous missions as much as you like.

The light RPG elements I mentioned are also a reason to go back and replay previous missions, as you can earn XP from any mission an unlimited number of times. The leveling process is linear and you don't get to pick your robots' abilities, but for some reason I didn't mind this. I guess this is because the real strategy in Steamworld comes not from building up your individual 'bots, but from building a team that synergizes well out in the field. 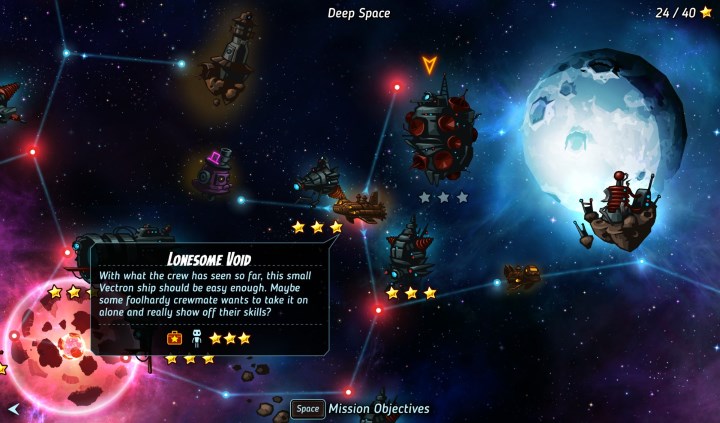 Steamworld also has some fairly nice music and sound design. The sound effects are crisp and satisfying, and every robot speaks with a unique electronic chatter that represents their voice. I found this to be a very clever way to bypass the need for voice acting. Rhody Tobin found this annoying, but on this point I will have to agree to disagree with him. The music within the missions is also fairly well composed, and they hired an actual steampunk-themed band to produce original tracks for all of the bar scenes. They're a bit goofy, but their passion for their work is clearly evident.

Honestly, I have very little to gripe about with this game. One thing I could mention is the fact that it feels like an imperfect port. It was released originally for the Nintendo 3DS, and it is clear that it was not exactly designed to be played with a mouse and keyboard (the developers are actually very up front about this as soon as you boot up the game). However, I tried playing with a controller and found that it wasn't very intuitive and the aiming was much more difficult. Does that mean that playing with a mouse is a bit like cheating? It's hard to say. I'm a PC gamer at heart, so maybe I just wasn't used to the controller. But even though I found that aiming was easier with the mouse, some of the other keyboard controls were somewhat awkward to get used to, so maybe it all balances out?

Either way, you will find the game loop of Steamworld Heist to be highly addictive and satisfying once you get into the rhythm of things. It took me about thirty hours to devour all of its content, and when the game was nearing its end I actually became a little sad. I didn't want it to end! It's just that fun. Yet, strangely, hardly anyone seems to know about it. Its Steam charts are nigh abysmal. A sleeper hit, then? Seems like an adequate descriptor. 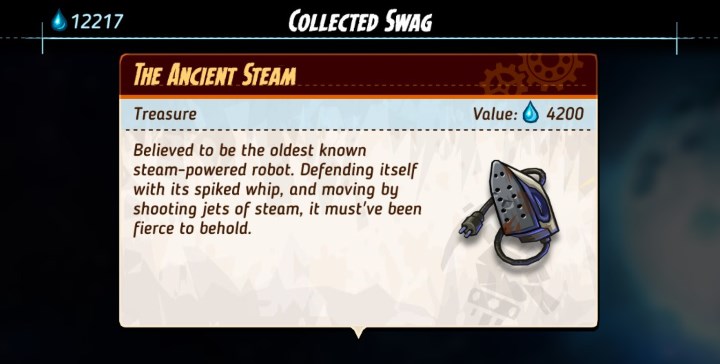 Steamworld Heist really took me by surprise. It is a solid, highly polished strategy game that has clearly been crafted with love and care. It is easily the best game I've played all year, and as far as I'm concerned, it is worth every penny of its purchase price. It also has a fairly-priced DLC expansion available if you are wanting more beyond what is offered in the base game. If you like strategy games at all, you should stop what you're doing and buy this game right now. You won't regret it.
4/5

If you enjoyed this SteamWorld Heist review, you're encouraged to discuss it with the author and with other members of the site's community. If you don't already have an HonestGamers account, you can sign up for one in a snap. Thank you for reading!

© 1998-2020 HonestGamers
None of the material contained within this site may be reproduced in any conceivable fashion without permission from the author(s) of said material. This site is not sponsored or endorsed by Nintendo, Sega, Sony, Microsoft, or any other such party. SteamWorld Heist is a registered trademark of its copyright holder. This site makes no claim to SteamWorld Heist, its characters, screenshots, artwork, music, or any intellectual property contained within. Opinions expressed on this site do not necessarily represent the opinion of site staff or sponsors. Staff and freelance reviews are typically written based on time spent with a retail review copy or review key for the game that is provided by its publisher.