THE FANTASY EPIC YOU NEVER ASKED FOR 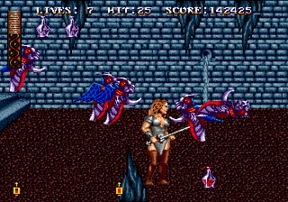 When sidescrolling hack-and-slash Sword of Sodan hit the Amiga in 1988, critics showered it with overwhelming praise. The game's lead designer  a fellow known as Sodan  compared its positive reception to winning an Oscar. I won't pretend that the original game still holds up well today, but its string of memorable encounters does present a unique atmosphere uncommon to games of the era. With its emphasis on telling a story through experience instead of exposition, Sword of Sodan could be considered an early example of "games as art".

The team that ported Sodan to the Amiga's console cousin, Sega's M68000-powered Genesis, displayed plenty of their own ambition. Blessed by the wisdom of hindsight, Innerprise cut some of the goofier obstacles (such as deadly dripping water), lengthened the stages, and greatly increased the number of enemies. This is aptly demonstrated in the stage called "A Passage Deep". Originally, the player fought three flying hornet beasts. Now, there are many more to contend with  and they attack from both sides, instead of just the front. This never-ending onslaught of oversized insects is a far cry from the Amiga's countable few! In the four-megabit remix, Brodan and Shardan's quest to slay the dark wizard Zoras transformed from an invasion upon a fortified village into an all-out assault against a nefarious army of doom.

Unfortunately, the Genesis game is HORRIBLE. My stout reviewing brother Dark Fact and I used to argue about everything  women, games, writing  until we both stumbled across Sword of Sodan. On this we agreed: when you cram the bloated, oversized cartridge into your virgin Genesis and turn on the power, it's too late; you've fallen into the developers' diabolical trap and sullied your system forever! However, unlike the majority of forgettable clunkers, Sodan's misguided ambition makes for a hilarious romp full of fond memories.

Before invading the Castle Craggamoor, you'll need to select either the studly male warrior or the sexy female warrior. Internet lore speaks of the female's physical advantages, which is surprising for a game born during the male-dominated decade of Swords & Sorcery. I asked HonestGamers legend Lilica for her thoughts on this:


YOU'RE THINKING TOO MUCH! Although poetic and insightful, the above analysis is moot because the male and female are actually identical in all manner except appearance. The male leans forward as though about to vomit, and the female tragically wears more clothing than her pre-game portrait lets on. My friend Mr. Fresh once told me, "She's naked on the Amiga!" That was a bald-faced lie, but it's true that Sega's censors replaced Shardan's metal bikini with more modest attire.* 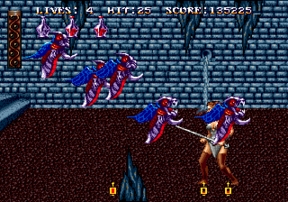 Speaking of the female, she's still fighting purple hornets. There are more of them now.

* Mr. Fresh once put together a compilation of Amiga footage for his IBM-owning buddies. Pictures of naked women were interspersed between video clips of awesome-looking games like Shadow of the Beast and Xenon, so we foolishly believed his tales of nudity. Little did we realize he didn't even own the Amiga Sword of Sodan, but we sure shared plenty of laughs over the Genesis port.

Once you've chosen a character, the adventure proper begins. Your large, lurching hero stands on a barren road. Grassy plains extend into the distance and mountains loom above the horizon, but there's no parallax scrolling  as you walk, the background simply shifts as though lurching across a tapestry that once looked pretty damn lush when compared to the 8-bit NES. Skeletons are nailed to poles, providing an ominous atmosphere that is offset by the sound of songbirds, merrily chirping on this bright sunny day.

No music. Just CHIRPY BIRDS. Even my non-gamer dad got a laugh out of that absurd contrast.

As you slay your foes, you collect potions that can be combined for various effects. Combine red and orange, quaff that concoction, and your sword glows with the flames of Hell itself. Cool! You might think such an ability useful, but YOU'RE THINKING TOO MUCH! The flames are just for show; enemies still die in the same number of hits, a number that varies wildly since it's all randomized. That's assuming you even hit the enemies at all, which relies on the fickle whims of Sodan's dodgy collision detection.

Those who plod through the first two levels will be surprised by a lumbering grey beast prowling the city streets. "BLAH BLUH BLAH BLOO!" cried my reviewing brother Dark Fact, in shockingly accurate imitation of the giant's silly sound effect. When I first encountered this beast, I was pumped up  finally, a boss! But no. After a few seconds, the beast harmlessly lumbered off. "BLAH BLUH BLAH BLOO!" The creature would not appear again until the final level.*

* "BLAH BLUH BLAH BLOO!" has become an inside joke that we use whenever mocking large, ineffectual bosses. Wrath of the Black Manta's big bald man would fall under this category.

After watching the giant beast lumber off, and after slicing through legions of axemen, there are two gigantic knights guarding the city's inner gate. To defeat them, you must first chop them in the gut to bring them to their knees, then hack away at their necks until their heads roll across the floor in a bloody mess. COOL!

I asked professional gamer and Duomazov website co-founder Ivanec about this game-defining moment:

Q: When you first beheaded one of Sodan's titans, how did it make you feel?
Ivanec: "I'll let you know when I finally figure out how to control the guy well enough to pull that off."
Q: That's why I use the girl! (Imagine sarcasm in my voice, since the guy and girl control identically.)
Ivanec: "I think I did too actually! I think I felt relief, because don't they have to kneel down and then you can still fucking miss them because the game sucks?"

Ivanec was not pleased by Sword of Sodan's fifth level, which fills a linear hallway with TWENTY GIANT KNIGHTS. They swing their spiked clubs so quickly that it's difficult to get close enough to touch them; although possible, it's a nerve-wracking experience. The developers apparently thought it wasn't nerve-wracking enough . . . so, as you walk along this stone corridor fighting TWENTY GIANT KNIGHTS, pits open up in the ground, killing you instantly. Can you see the pits in advance? Heavens no! Can you leap to safety as the pit begins to open? Of course not! Choke on INSTANT DEATH, feeble gamer!

After you've perished, the game does offer some helpful advice. 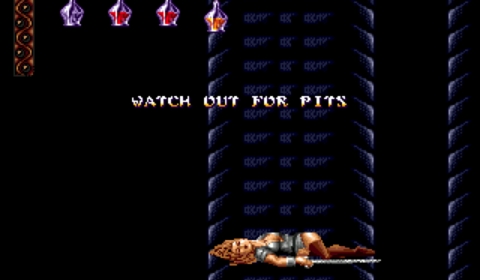 It should be noted that the Amiga version has one pit. The diabolical Genesis port fills the entire hallway full of the damn things. And the easier Amiga version didn't put those dumb giant knights all over the place, either.

PROTIP: Fall into fourth pit for secret escape into Level 6.

SUPER PROTIP: Combine and quaff four purple potions to instantly warp to the next level without wasting lives trying to get past the first three pits. 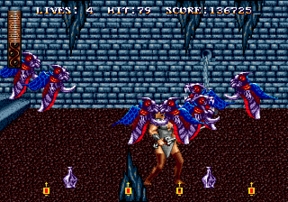 While Ivanec was fighting giant knights and falling into pits, Shardan was still fending off a never-ending horde of purple hornets. The hornets screech "EEEE! EEEE!" whenever they die, which gets pretty irritating after killing a dozen of the critters.

Like many of its 16-bit brethren, Sword of Sodan also features a lava level, during which the game suddenly decides that it wants to be a platformer. Nowhere else in the game are you required to jump; but for this section, you must accurately leap onto small platforms that float left and right across rivers of magma. To touch the lava means INSTANT DEATH! Unfortunately, jumping is horribly inaccurate, so four times in five, you'll barely miss the elusive edge of the floating platform (combine red and purple potion for an extra life). If you should successfully land on the floating rock, the fireballs flying across the screen will most likely knock you backwards into the gushing lava. This results in gruesome death, although the game provides a new bit of advice:


WATCH OUR FOR FIREBALLS
In addition to pits and fireballs, you will have to:


WATCH OUT FOR HAMMERS
. . . . . as giant cement blocks randomly fall from the ceiling, crushing you.


WATCH OUT FOR SPIKES
. . . . . as giant spikes randomly pop up out of the ground, impaling you.

And sometimes you have to watch out for all three. 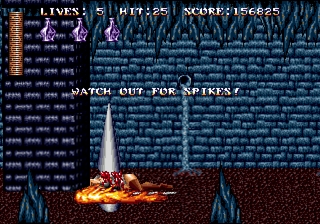 Sword of Sodan is a bad game, but that doesn't mean it has no value. It's not an unplayable, glitch-ridden mess like Dark Castle, and it's not an exercise in inanity like Budokan. The game's an ambitious spectacle of failure, full of crazy and hilarious scenarios  only a few of which I've documented above. Without Mr. Fresh's (false) tales of forbidden Sodan nudity, I'd have never cared about the Amiga. Without Sword of Sodan to break the ice, I'd have missed out on eight years of friendship with fellow reviewer Dark Fact. It's a bad game, but it's the kind of bad game that brings people together because it's actually worth experiencing.

Sodan once said he'd like to be remembered for creating Sword of Sodan. To him, I'd say "you got your wish." To everyone else, I would say "WATCH OUT FOR BAD GAME"

If you enjoyed this Sword of Sodan review, you're encouraged to discuss it with the author and with other members of the site's community. If you don't already have an HonestGamers account, you can sign up for one in a snap. Thank you for reading!

© 1998 - 2022 HonestGamers
None of the material contained within this site may be reproduced in any conceivable fashion without permission from the author(s) of said material. This site is not sponsored or endorsed by Nintendo, Sega, Sony, Microsoft, or any other such party. Sword of Sodan is a registered trademark of its copyright holder. This site makes no claim to Sword of Sodan, its characters, screenshots, artwork, music, or any intellectual property contained within. Opinions expressed on this site do not necessarily represent the opinion of site staff or sponsors. Staff and freelance reviews are typically written based on time spent with a retail review copy or review key for the game that is provided by its publisher.