Forgotten Trace: Thanatos in Nostalgia bounces all over the place in almost every aspect of its design. At its best, its a captivating supernatural mystery revolving around unlikely teenage suicides who shake off life-altering disabilities just long enough to kill themselves. At its worst, its a painful slice of life comedy that will often present what could be an amusing premise or idea, then works spectacularly hard to drive it into the ground. The wackier aspects of Trace noticeably exist for grander reasons than to provide a cheap chuckle, but as a way to explore the main characters from different angles - which is good. Only they make that point, and then they keep going. Dragging out and repeating it over and over, like a reviewer school child who has to write a 2,000-word essay but finds themselves tapped out at half that. There are passages in Trace that feel like they may never end and you slowly come to accept that this is your life now, reading about high school girls with boob envy verbally jousting with hyperactive teenage playboys until the sun gives out. You have to be brave; theres a very good story buried in there somewhere. 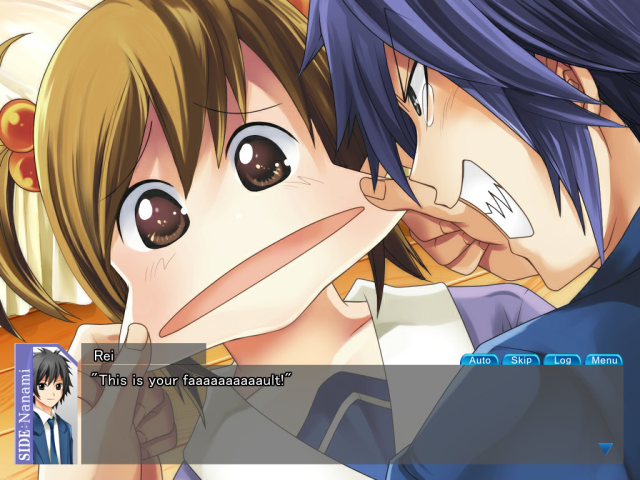 Or, at least, theres the start of one. This games full title is Forgotten Trace: Thanatos in Nostalgia  Chapter 1 Complete. This is because its native Japanese release schedule is episodic, and, here, the four episodes of the first chapter are collected and included as one base game. To that end, its the first of a planned trilogy, which probably explains the weird hyper-focus on the cast. Its the foundation title employed to set up the rest of the series, used primarily to introduce the main characters. It occasionally does a very good job of this. For example, the protagonist, Nanami Kazuya, is a floundering shell of his former self. Once a rising high school soccer star with aspirations of going pro, hes been wallowing in his own depression after suffering a debilitating knee injury in what was the most important match hed yet to play. But you dont learn this immediately; when you first meet him, hes laid out in an unfamiliar forest. He has no idea where he is, how he got there, or what to do next. Its the dead of night and the middle of a snowstorm, and he cant shake the feeling hes being watched. Theres footprints embedded in the snow, and, with no other course of action, he follows them until they come to an unexplainable dead end.

Then he hears singing. Then he finds the source; a woman standing in the midst of an icy lake, barely clothed in fluttering tatters. She recognises him, and he feels he should know her, but doesnt. When he eventually awakens, he dismisses the experience as a particularly vivid dream. Only, little pinpricks of it keep bleeding through into his everyday life. 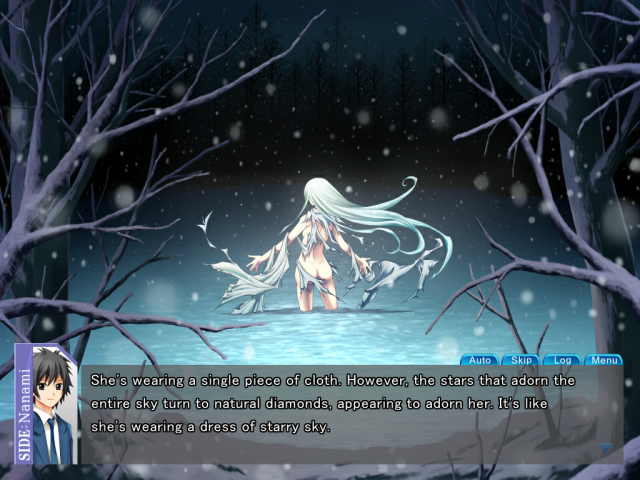 Moments like the dream represent Forgotten Trace at its best. However, seconds after waking from this, Kazuya hears weird noises in his house and goes to investigate. Then he discovers a weird girl hes never met before in his life. Then he discovers that his best friend has been smuggling girls into his house for secret trysts. Then he discovers that his friend is, openly, the most cringeworthily person in the world and has no right to obtain any kind of female attention. Then he has to reevaluate this, because another childhood friend arrives, and the game begins a very, very long passage over which of the two can be the most annoying.

Eventually, the plot will move away from the whacky threesome in an effort to establish more of the characters. Another childhood friend is rarely at school, confined to a never-ending series of tests at the local hospital, for example, presenting a much more sombre setting. Commendably, I guess, Trace usually finds a way to draw you back in after youve suffered through a particularly arduous stretch of bloated nonsense. The problem here is, just as it cultivates to the point where the scattered plot starts to come together, it hits two pretty sizable walls. The first is that, rather than tell everything from Kazuyas perspective, it allows you to change the main character at certain points, letting you muscle in on differing perspectives. This should be a cool little feature, but, unsurprisingly, the way its actioned makes the process feel unnecessarily bloated. Rather than feature unique passages for each character, large swaths of text are copy and pasted between the cast, with only their personal reactions changing. The seconds even worse; just as the plot takes a turn for the better, just as it seems like it was getting to the point where the previous silliness starts to make an awful kind of sense, the games done. Chapter 1 is wrapped up.

I wouldnt call it a cliff-hanger ending; theres a sense that a lot of threads have been either neatly concluded or provided with enough answers for the reader not to feel cheated. But it certainly cuts itself off at its most interesting point. Which is the nature of episodic releases, I suppose. Still, it does sting that youve powered through the worst of what Trace has to offer and, just as it seems you might be getting to its best, its whisked away and youre told youll have to hurry up and wait if you want to learn more. This might be one of those releases where youre better off waiting for a complete edition, rather than tackling it in separate chapters. Its hard to recommend sudden endings that

If you enjoyed this Forgotten Trace: Thanatos in Nostalgia - Chapter 1 review, you're encouraged to discuss it with the author and with other members of the site's community. If you don't already have an HonestGamers account, you can sign up for one in a snap. Thank you for reading!

© 1998-2021 HonestGamers
None of the material contained within this site may be reproduced in any conceivable fashion without permission from the author(s) of said material. This site is not sponsored or endorsed by Nintendo, Sega, Sony, Microsoft, or any other such party. Forgotten Trace: Thanatos in Nostalgia - Chapter 1 is a registered trademark of its copyright holder. This site makes no claim to Forgotten Trace: Thanatos in Nostalgia - Chapter 1, its characters, screenshots, artwork, music, or any intellectual property contained within. Opinions expressed on this site do not necessarily represent the opinion of site staff or sponsors. Staff and freelance reviews are typically written based on time spent with a retail review copy or review key for the game that is provided by its publisher.