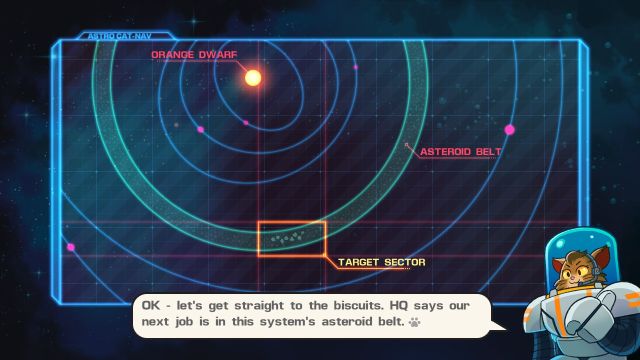 I've got nothing against the 2D shooter Astro Aqua Kitty. It provides plenty of simple, cartoony action and doesn't place any extreme demands upon you. Plus, it sports a generous helping of RPG elements. It kicks off by giving you a lineup of cute anthropomorphic animals to serve as a crew for a high-tech, deep space submarine. You select two from the list, then blast off to a stellar body of some kind and voyage through its vast ocean, annihilating robotic sea life as you advance. No, this isn't a scrolling shooter or a full-blown "bullet hell" title, but your standard manual side-scrolling job that allows you to move freely about a stage at your own leisure.

As you can tell, Kitty isn't your average shmup, where you're forced to move in a single direction and merely take in sights while things fly at you. Here, you get a whole body of water to explore, with all manner of hidden depths and sealed off chambers teeming with foes and treasure. You're sure to find plenty of gems that serve as cash, plus fresh equipment to bolster your submarine or become merchant fodder. We're talking everything from a coffee machine that increases your energy output to a reinforced hull for added toughness, not to mention a variety of weapons. For instance, you could go with a standard blaster, select a shotgun for close combat, or choose a rifle that fires multiple quick bursts. Hell, you could even slap on a punishing laser that quickly eats away at a target's hit points, all at the cost of a slight cooldown time and some energy.

These aren't the only incentives for exploration, though. Honestly, mapping out entire levels and picking fights with anything that moves is your best strategy, as that's the most effective way to level up and take full advantage of stat bonuses. As it turns out, the game's RPG elements aren't merely tacked on, though they also aren't needlessly complex, either. Each time you gain a level, you can upgrade your ship at a shop, or select from a list of skills to equip. The skills you have on offer depend on the crew members you select at the beginning of the adventure, and can range from passive bonuses that strengthen your defenses or damage output in certain situations, to new methods of dishing out pain. My personal favorite is a cluster bomb sends out dozens of little explosive mines that pulverize everything around you. It's perfect for moments where you're hopelessly surrounded, as you can be during the later phases of the campaign. 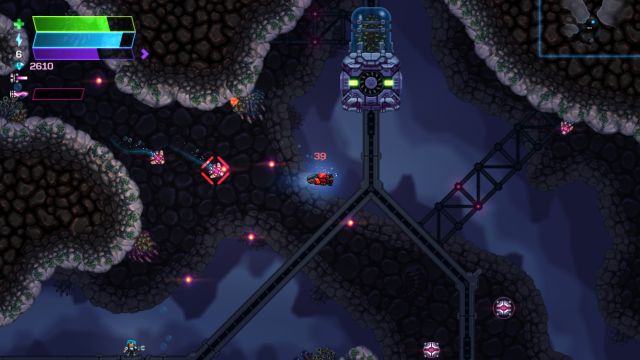 I had stated earlier that Kitty isn't overly demanding, and that's largely because the game appropriately scales up its challenge factor as you progress. The first few levels thrust you into basic skirmishes, interrupted by rudimentary side quests given to you by NPCs found throughout the sea. However, later challenges involve slowly chiseling your way through gauntlets thick with enemies. You might enter a sprawling area and find schools of robotic fish swimming about, with each of them launching projectiles at you. Meanwhile crabs fire homing rockets from afar and an armored pirate vessel attempts to end your life with a few different types of guns. At times like these, you need to pick your targets wisely and eliminate them one at a time. As you can imagine, such encounters really drag out later stages.

Thankfully, you have two factors working in your favor here. For one thing, most of the creatures you dispatch remain gone for good. For about every ten robots you destroy, maybe one of them is set to constantly repsawn. Additionally, you can venture back to a save point any time you're in a jam to save, which fully restores your sub. Upon doing that, any damage the opposition has sustained stays in place, which is helpful for the numerous moments where you need to whittle down tremendous, armored monsters that are armed to the teeth with deadly firepower.

While this game sounds like a blast--and really, it kind of is--I struggle to give it a full, confident recommendation for only one particular reason: little of its content stands out. 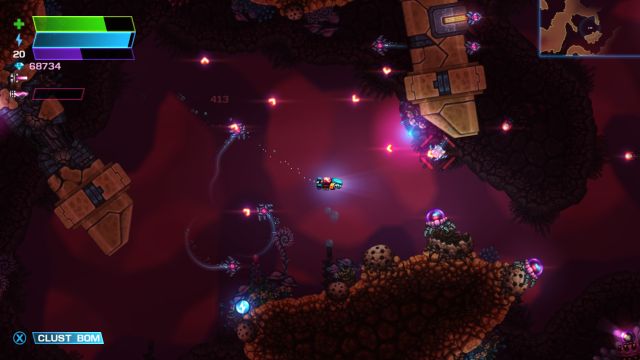 Kitty's simplicity makes it easy to pick up and get into, but it also leaves the experience without many remarkable moments. From one instance to the next, you mostly embark on the same kinds of missions: sail around, shoot things, collect stuff. When you're done with that, you take a different route, shoot more things, and collect more stuff. The campaign is repetitive to the point that it grows tiresome quickly, so much that you might find yourself ending each session after only a single stage rather than pulling any late-night marathons.

It's weird, because I know each section provides new music and different visuals, not to mention actual plot beats, but it all plays out in the same fashion. I'm not saying this title needed to have some deep, dramatic storyline, but it definitely should give you something to remember besides a tough final boss and some catchy cuts on the soundtrack. Hell, the game features a lot of adorable animals, but doesn't quite lean into that stylistic theme enough. I keep thinking of the Cat Quest series in this respect, and how it made the most of its silly premise by barraging you with fun little cat and dog puns. You don't get much of that here, and it feels like a missed opportunity. It also doesn't help that most of the dialogue is dry and forgettable. 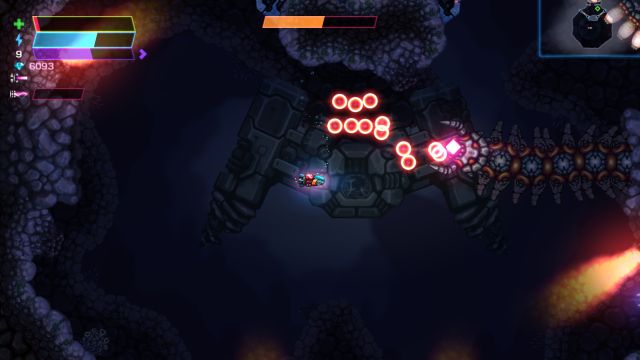 Understand one thing: I'm not recommending against playing Kitty. It's more or less the title it should be, thanks to solid mechanics and just enough quick action and exploration to keep you busy for eight-ish hours, plus it doesn't try to bog you down with a clumsy, overblown story. It just doesn't make the most of its concept. It doesn't showcase any standout moments, and the finished product ends up feeling like a string of 2D battles rather than an otherwordly adventure starring humanoid critters. As I said before, I don't have anything against Kitty. However, I also don't have as much for it as I would like.

If you enjoyed this Astro Aqua Kitty review, you're encouraged to discuss it with the author and with other members of the site's community. If you don't already have an HonestGamers account, you can sign up for one in a snap. Thank you for reading!

© 1998-2021 HonestGamers
None of the material contained within this site may be reproduced in any conceivable fashion without permission from the author(s) of said material. This site is not sponsored or endorsed by Nintendo, Sega, Sony, Microsoft, or any other such party. Astro Aqua Kitty is a registered trademark of its copyright holder. This site makes no claim to Astro Aqua Kitty, its characters, screenshots, artwork, music, or any intellectual property contained within. Opinions expressed on this site do not necessarily represent the opinion of site staff or sponsors. Staff and freelance reviews are typically written based on time spent with a retail review copy or review key for the game that is provided by its publisher.