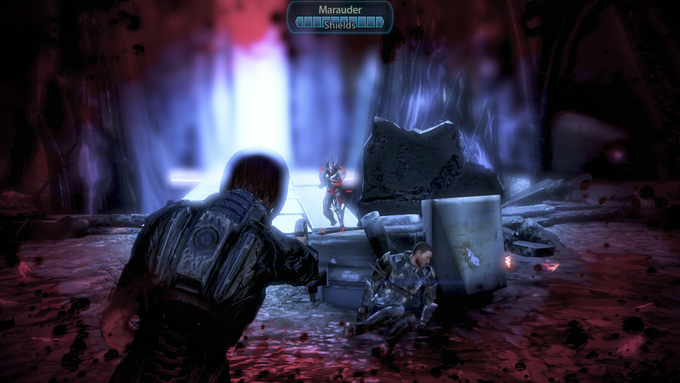 He tried to stop you. He knew what was ahead. If only you'd realized what he was trying to do.

He tried to save you from the awful, awful ending. But he failed.

He is the true hero of Mass Effect. May he rest in peace. Excerpt from another forum I frequent.

"...A few days ago my roommate who's been playing this p. steadily for weeks did something that we think might have been, if not unique in pvp then at least vanishingly uncommon. For starters he's doing a Faith build which I gather is rare in itself, but it's made a few of his spells quite powerful including Wrath of the Gods, that fat white aoe that the giant knights in Anor Londo do. It's been quite effective by itself during world invasions, but one night we decided he should combine it with the Chameleon spell that turns you into a vase. And the giant dragon helm that breathes fire.

Follow-up to my post from yesterday, here's a little video about a bunch of guys in EVE who take on and beat a bunch of other guys who outnumber and outgun them, and on their own turf. How? Through superior tactics, of course.

This video is dramatized, sure, and not all of EVE is like this all the time. But this is an example of how good it is at its best.

Anybody want to play internet spaceships for free for two months?

I'll help get you started.

Haven't done an update in a while.

Last time I talked about internet spaceships, I was in the depths of uncharted wormhole space with my corpmates. The alliance that corp was in has since collapsed in on itself after the guy at the top stopped playing, and the power vacuum that created made the whole structure just come tumbling down. I jumped ship and went back to the guys I used to fly with in The Graudates (TGRAD), and joined up with my old pal Hels, who some of you will know better as BLAHOrblah. There's many a story about the two of us flying spaceships all the way back in 06, but I'll tell those another time.