From the day it first oozed forth into unsuspecting arcades, the SplatterHouse franchise has been synonymous with outrageous violence, undying horrors from beyond the grave . . . and equally musty gameplay. Yet where its predecessors may have been stiff, simplistic side-scrollers, this third installment chucks out the old formula like so many decapitated heads in favor of brutal beat 'em up action featuring a few novel twists. 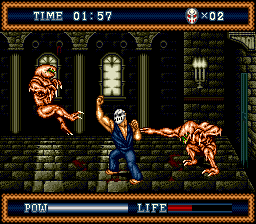 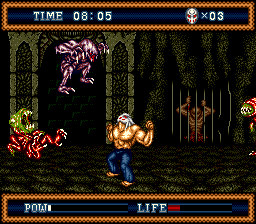 You'll once again step into the blood-spattered soles of Jason Voorhees Rick Taylor, average joe turned hulking ghoul thanks to the demonic influence of his suspiciously familiar Hell Mask, only those days of plodding due right and occasionally failing to watch out for pits are but a (thankfully) distant memory. Every stage now allows you to freely wander through a veritable maze of rooms and corridors in the titular mansion, hot on the trail of both bloodshed and Rick's beleaguered family. Thus you're constantly faced with a number of different paths you can take, some rooms being empty or containing helpful items, most packed to the rafters with ravenous undead. All the exits slam shut as soon as you tread into a room inhabited by monsters, but they have the decency to remain dead should you need to backtrack through earlier areas, and you can call up a map of the entire level any time you're not locked in combat to better plot your course. The current goal's location is always marked, as are special one-way portals that may lead to shortcuts or caches; naturally the ostensibly direct route is always going to be the toughest in reality, and sure to squander too many seconds of precious time.

For not only are you attempting mere survival, but also racing against a timer that's constantly ticking down various unspeakable fates just aching to befall Jennifer or Rick's young son David and further punctuated with increasingly dire cut scenes. Spend too long wading through a hallway of hungry hellhounds and you may be treated to a description of Jennifer's gradual descent into zombiehood as parasitic boreworms quiver beneath her flesh in search of delicious brains, a none too subtle hint that your own search had best be a quick one. Curiously Namco seems to be operating under the assumption that the prospect of Rick's family meeting a tragic and grisly end is something we wish to avoid. I mean, what fun would that be? This must be why failing to complete a level in time doesn't force you to replay it or anything similarly lame  instead your loved one really does suffer a fate worse than death and the game proceeds merrily along towards a slightly different conclusion while Rick broods over his failures. None of this has any effect on the actual gameplay, but it's a nice touch; in true genre fashion, our hero's quest may very well cost him everything he holds dear. 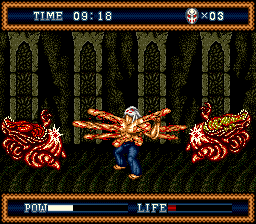 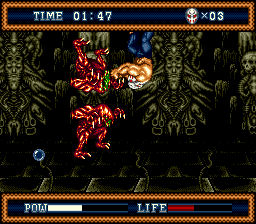 Sadly for those who hold dear the series' well deserved reputation for savagery, this is the least explicit of all the SplatterHouse games with the obvious exception of the excellent Famicom spinoff Wanpaku Grafitti. Weapons have always been a major staple of previous outings, both in terms of their sheer effectiveness and disgusting results; the cover even depicts Rick hefting a wickedly honed battleaxe against the forces of ugliness. Unfortunately in reality armaments are only found in out of the way areas, in addition to being carted away by ghosts if they're knocked from your grasp for more than a few seconds and subsequently deposited in their likely distant lair. Even then such favorites as the cleaver merely dish out extra damage rather than instantly rending your victim into an eruption of mush, nor are the trusty chainsaw or shotgun anywhere to be found, although it is kind of fun to temporarily transform into HULK SMASH Rick, a bulging behemoth who shrugs off pain and ramps up the hurt with his crushing piledrivers and vicious choke holds.

That said, there's still more than enough gore present to send uptight senators and disgraced attorneys alike into conniption fits. Repeatedly pummeling your enemies inflicts a visible effect upon their misshapen anatomies: heads crack apart to reveal rancid ooze and bone, sometimes even dropping right off as the creatures continue to strike back until finally dissolving into writhing puddles of slime. Later on you'll encounter heavily robed figures sporting burlap sacks and massive claws; hit one enough times and the cloth bursts apart to reveal little more than a floating cancerous growth lined with fangs. This is while you're treading past mutilated meatbags heaped in all corners, paintings that erupt with bloody gashes, and eviscerated corpses that suddenly drop from the ceiling. What you won't find, however, is anything that quite reaches the level of the Biggy Man or Fetus Shed days of yore, not that it spared the game from its own controversies. 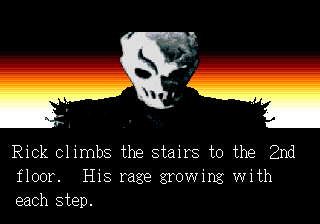 Even if such moments might be slightly less stomach-churning than earlier fare, when it comes to overall quality the greatest offerings in this series are undeniably those which deviate from the standard formula. For the past fifteen years SplatterHouse 3 has served as the final resting place for a once infamous legacy, but at least it went out on a high note  we can only hope that when Namco finally digs Rick up for his 2010 revival their efforts won't produce a foul, rotting husk.

If you enjoyed this Splatterhouse 3 review, you're encouraged to discuss it with the author and with other members of the site's community. If you don't already have an HonestGamers account, you can sign up for one in a snap. Thank you for reading!