Coeval cinematic platformer, Another World, stranded its protagonist on an alien planet filled with incomprehensible hazards and then expected him to figure everything out on the fly. The entire thing was played without explanation, without exposition or narration; the world wasnt there for you to gain encyclopaedic knowledge of  it was just there, and you had no choice but to embrace it. What followed was a game so immersive that hack video game critics are still using as a reference point some thirty years after its release.

Planet Alpha strands its nameless protagonist on an alien world filled with incomprehensible hazards and then expects everything to be figured out on the fly. You can see where this is going; the games share a lot of similarities, while, at the same time, being very different. Another World was aggressively hostile, presenting you with six or seven different ways to die per screen. You were an interloper; you didnt belong there and so every sentient thing on the planet banded together to try and kill you. Alphas planet is very different; though you will die often, its not often by design. The planet itself seems undeveloped for long stretches and abandoned in others. Nature has taken control. For long delves through the alien world, the only signs of life are the bizarrely wonderful wildlife that meander around, largely indifferent to your plight. Those that take active notice of you arent thrilled with your sudden appearance in their habitat, and some are certainly more hostile than others. But theyll never be the main cause of your massive catalogue of deaths. Those will be the fault of the invading robot army. 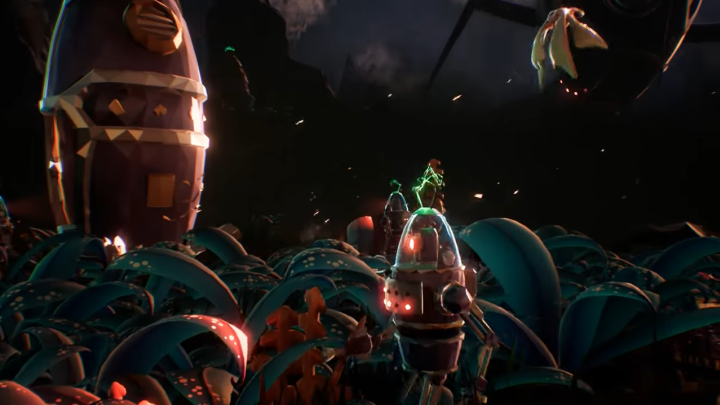 If they werent the cause for my painful demise on more occasions than I care to remember, Id probably be a bigger fan of the would-be robotic overlords. Theyre designed with a retro 50s kitsch, all conical electricity conductors and blocky box-shaped ray guns that would be a lot cuter if they didnt fry you on the spot. Youve no defence against adorable artillery and, with no means to fight back, have to rely wholesale on stealth. While waiting for a guard to turn its back so you can crouch-walk in the convenient shadow of a piece of handy waist-height architecture isnt about to get reinvented here, Alpha, smartly, tries to tie as much as it can around its greatest asset - the planet itself.

For example, at certain parts of the game, you're given the ability to play around with the night/day cycle. On the surface, you would think being able to provide a constant cloak of darkness would aid you in your sneaky sneaking, but that just proves you, thoughtless reader, would not last a second come the great robot uprising. They can see just fine in the dark. Instead, you use this ability to manipulate the wildlife around you. Maybe certain wildlife become more territorial come dusk, causing enough of a distraction for you to slip through a search net. Maybe the sunlight causes a sudden growth of roots that will help you reach little perches of safety, or perhaps the moonlight will encourage huge pale flowers to unfurl, providing you with a series of platforms where, previously, there was only a dead end.

Its an idea of huge merit because, even if so much didnt revolve around trying to work with the planet itself, it would remain very much the star of the show. Planet Alpha is a ridiculously beautiful game, in the way that there are countless moments where youll need to just stop and stare at your otherworldly surroundings. Youre introduced to the world as you hobble your marooned survivor through what initially appears to be a featureless desert, but soon transitions into a forest of mountain-sized pods. Are they weird alien plants? Some kind of construction? Youll never know; they stretch out into infinity, but they look dull, washed out. Dead. The planet looks forgotten as you drag yourself onwards. The sands seem endless, but theyre not. You find a series of caves with the contents hinting of settlers, but it all appears ancient. You forge through the narrow tunnels, until you emerge into, well, this: 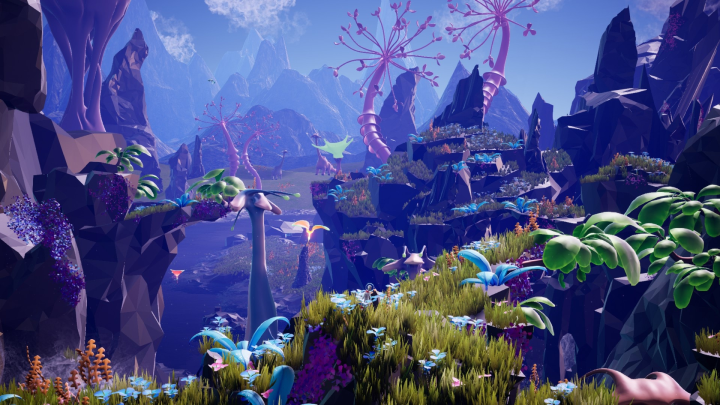 Sure, at some point, angry robots will turn up to ruin the serenity so as to portray an environmental message thats about as subtle as a half brick to the face. Until then, each section of the planet you explore is a cacophony of little discoveries. As you run through this opening area, bizarre petal-like butterflies are disturbed by your thoughtless trampling and take radiantly to the air to avoid your clumsy stomping. The heads of impossibly large animals peek up from the depths of the background to pull at and devour chunks of light blue foliage. You move to the right (always to the right - thats were salvation ever hides) and the camera tightens focus so you can steal away through a web of pale pinks roots, or pans out so it can sweep through imaginative vistas that will probably distract you just long enough to fall off that crumbling cliff, or not notice your precarious platform has started to crumble.

Plant Alpha doesnt have the most robust of runtimes, but what it manages to squeeze into its four-to-five hour lifespan is ridiculous. Moments of frantic survival like falling face first into a hive of alien wasp creatures that really would prefer your werent there, or trying to stay out of sight while a progression of robots lead an unending convoy of mining machinery will often punctuate periods of relative calm where the only danger is your own poor platforming skills or your inability to solve some light puzzles. Its clever and wonderful to look at, but its atmospheric before its challenging, and stalwarts of the early cinematic platformers like Another World may miss the sadistic bite of its forefather. Or maybe youll not miss discovering a horrible new way to die every three minutes instead. Im not going to judge.

If you enjoyed this Planet Alpha review, you're encouraged to discuss it with the author and with other members of the site's community. If you don't already have an HonestGamers account, you can sign up for one in a snap. Thank you for reading!

© 1998-2021 HonestGamers
None of the material contained within this site may be reproduced in any conceivable fashion without permission from the author(s) of said material. This site is not sponsored or endorsed by Nintendo, Sega, Sony, Microsoft, or any other such party. Planet Alpha is a registered trademark of its copyright holder. This site makes no claim to Planet Alpha, its characters, screenshots, artwork, music, or any intellectual property contained within. Opinions expressed on this site do not necessarily represent the opinion of site staff or sponsors. Staff and freelance reviews are typically written based on time spent with a retail review copy or review key for the game that is provided by its publisher.