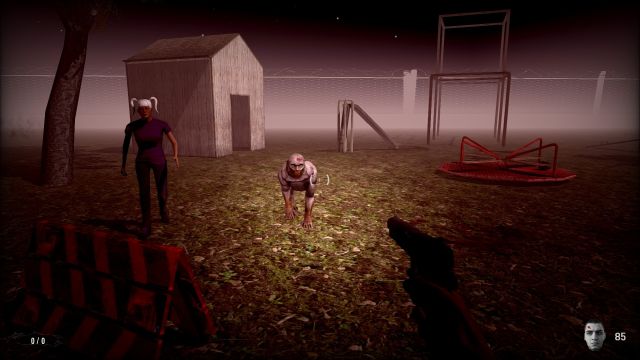 Maybe, like me, you're excited to play a new horror game, regardless of what the thumbs downs and/or angry, red text on Steam tell you. The words "mostly" and "negative" together are frightening, but as a horror fan you regularly laugh in the face of fear. So, much like a homeowner who disregards the bloody message on the wall of an obviously haunted house, you won't be dissuaded by ominous, crimson-colored warnings. You slap down that dirty, digital dollar and run full force into a game like Abasralsa...

Your transaction complete, you fire the title up and examine its main menu items: start, exit, options and about. That last one piques your interest, because it sounds like it might add some context to the brief, asset-flippy nonsense you're about to play. However, when you click "About," the only thing you see is the game's title.

You read that correctly: there's a main menu option used to show you only the frickin' title. No, it isn't present when the app fully boots, but hidden until you click "About." Questionable design like this isn't just a red flag, it's a red national anthem. "Get out while you still can," blares the orchestra. 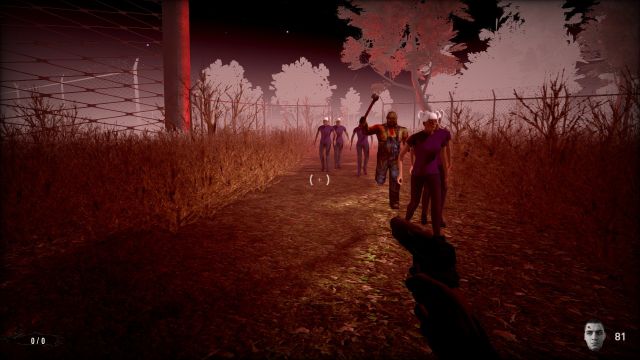 But you don't. You enter the fray anyway because you want to give this product a fair shake, thus spawning in an abandoned asylum for the 3248th time in horror game history. Within the first few seconds, you locate a pistol and some ammo, and you're glad to be playing a shooter and not some tedious walking simulator filled with funhouse-like scares. At very least you'll get some cathartic, mindless violence, right?

As you turn to escape to this hell hole, a couple of man-faced dogs waddle toward you. Well, sort of toward you... An invisible obstruction prevents them from advancing on you. You take advantage of the situation, putting bullets in their head before moseying onward. That's when a twisty-limbed monster comes after you, prompting you to "Right Shift" your butt out the nearest egress and straight into an open field. There, you tear through a veritable forest of tall grass and weeds while zombies amble after you. You don't bother shooting anyone, choosing instead to run, baby run. However, trepidation eventually overtakes you, because you know you're going to deplete your stamina soon, forcing you to walk while the undead bear down on you.

...except your stamina never runs out.

You escape with maybe a tiny scratch because the bestiary is completely toothless. Since you can run indefinitely, you can easily outpace or maneuver around them. Meanwhile, the opposition gets caught on invisible barriers, much like the aforementioned dogs. You freely deposit bullets into their noggins, obliterating them with merely a few hits each. On top of all of that, you find an ample supply of bullets if you search around, as well as a shotgun and a revolver. Hell, you might as well be exterminating ants with a flame thrower. At this point, it looks like you're going to trounce this campaign and moonwalk to the end before you know it. 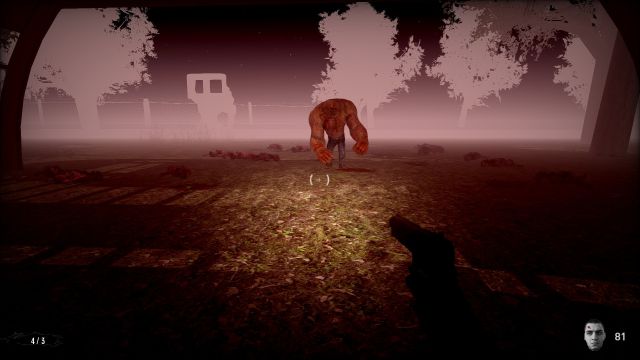 The only thing that stops you dead in your tracks is a locked gate. "Find a key," the game implores. So now you wander.

If you're lucky, you'll locate the key eventually. It's in a hut, next to a playground that you can find by following the fence that surrounds the premises. However, some folks aren't going to snatch it off the bat. They're likely to travel all over the accursed map and run out of targets to shoot. These fields don't hold many foes, either, so you're looking at long, boring stretches between structures and enemies. Some bouts of aimless journeying can feel like hours, too, even though only a few minutes pass.

Eventually, you get through the gate and suddenly some random girls with pigtails attack you. You shoot them all and they whistle merrily as they die, and you think for a moment you may have just murdered the Harlem Globetrotters. You pause just then, wondering what this scene was supposed to mean. Up to this point, you've only fought hellish creatures and not normal human beings, so there must be some significance to this encounter. The simple answer is NOTHING. Not a single thing has mattered thus far, and you can bet that nothing else you bump into will matter, either. Truly, this game is nothing but a bunch of random terrain teeming with arbitrary character models just meandering about, waiting to get shot. Oh, and it happens to have some horror elements...

At last, you're at level two, and it's more of the same content. You know this when you bump into a locked gate somewhere that requires another key. A multi-story structure lies in the distance that may as well have a giant neon sign reading, "KEY HERE, IDIOT." A short trot and a quick check confirms your suspicions, providing you with one key sitting next to a soiled mattress. Because why not? 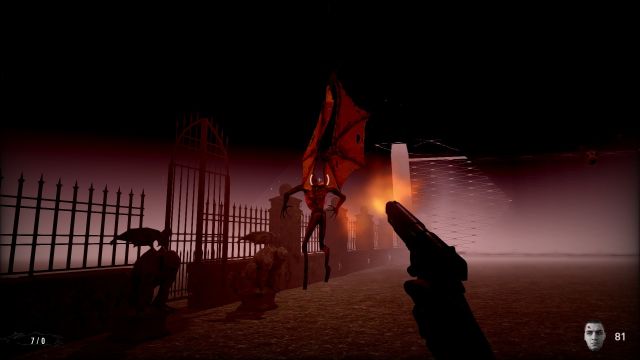 Before you can say "sloppy seconds," you're off and back to the gate. You push beyond it and the screen transitions. Oh, joyous day, we're going somewhere else! You can't wait to see what other random nonsense awaits you beyond the first wave of random nonsense. Unfortunately, the only thing that greets you is the word "continue." You click on it and go back to the main menu. That's literally the opposite of what the word "continue" means.

Congratulations, you've beaten Abasralsa. The silver lining to this experience is that you only lost a buck and half an hour. However, a low asking price and brief play time don't improve a product. It's still an abysmal, inept attempt at horror that doesn't only lack content, but substance of any kind. It's games like these that make me question my desire for inexpensive scary fare on Steam. Maybe one day I'll learn my lesson. I doubt it, though...

If you enjoyed this Abasralsa review, you're encouraged to discuss it with the author and with other members of the site's community. If you don't already have an HonestGamers account, you can sign up for one in a snap. Thank you for reading!

© 1998-2021 HonestGamers
None of the material contained within this site may be reproduced in any conceivable fashion without permission from the author(s) of said material. This site is not sponsored or endorsed by Nintendo, Sega, Sony, Microsoft, or any other such party. Abasralsa is a registered trademark of its copyright holder. This site makes no claim to Abasralsa, its characters, screenshots, artwork, music, or any intellectual property contained within. Opinions expressed on this site do not necessarily represent the opinion of site staff or sponsors. Staff and freelance reviews are typically written based on time spent with a retail review copy or review key for the game that is provided by its publisher.