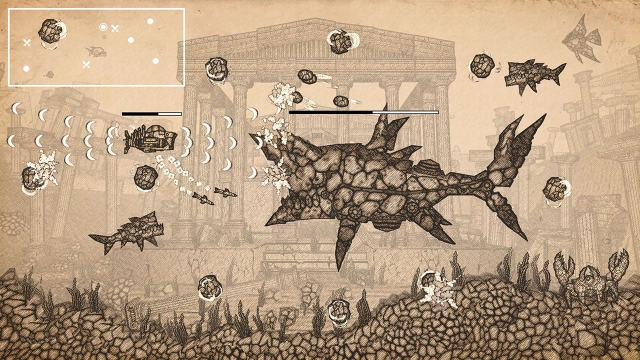 As someone born in the early '80s, I am a man of simple pleasures. A few quarters and a working Galaga or Centipede cabinet typically while away a fair chunk of time. Obviously, I've been happier than a pig in slop since indie gaming came into its own, especially with developers seeking to reimagine games and concepts from my formative years. Granted, I'm not one to turn down a more modern, plot-oriented game, but that doesn't stop me from enjoying more rustically built pieces as well. Honestly, just give me a ship, things to shoot, and some kind of variety and I'll be just fine.

For the most part...

I thought I found that setup with the 2D nautical shooter Earth Atlantis. Unlike your average submarine title, this one features an art style similar to old, hand-drawn sea charts, complete with marine monsters. This title offers a twist on that concept, though. The aforementioned maps usually showcased nasty hybrids of fish and cloven-hoofed mammal. Here, your opponents are all robotic, from mechanical sharks to bionic sunfish. Yes, you even battle mechanized squids, metallic crabs, and a massive robo-whale.

Thankfully, you sail a high-tech, post-apocalyptic submersible that's armed to the teeth with handy firepower. You start off with a modest blaster, but eventually improve it after nabbing power-ups from the scattered remains of your enemies. You even locate a few sub-weapons (pun definitely intended) that add an extra level of punishment and allow you to slack just a little more. Aside from your main gun, you can also acquire homing missiles, torpedoes, a bouncy (and quite deadly) ball, or an electric shocker that slowly drains nearby targets. After a handful of upgrades, you go from firing in one direction to cutting loose a screen-spanning field of blasts from both ends of your ship that clears the board with ease. On top of that, you also unlock additional vessels as you go, each with their own stat builds and main artillery. 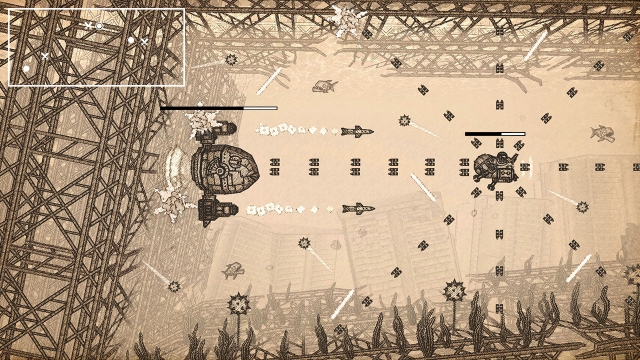 Your objective here isn't tough to figure out: using a radar, you explore a complex network of undersea caves to one of many bosses, and lay it to rest. Once you've destroyed them all, you take on another slew of bosses, then another, then another... You see, this isn't your average scrolling-style shooter. You roam freely about the place, exploring the convoluted collection of passageways in an attempt to find the safest route to your next challenger. There are no additional levels, and you only progress through the one, sprawling area.

The bosses you face range in regards to difficulty rating, where you fight your share of pushovers, but you also battle some villains who leave you wondering how you'll ever survive. The best of these tend to lie somewhere near the middle, where you're constantly kept on your toes without feeling like one wrong move will send you to a quick grave. For instance, a couple of Megalodon-like creatures you encounter play out in that manner, hitting you with homing missiles, flying boulders, electric volts, and eventually devastating charge attacks that are blatantly telegraphed enough for you to get out of their way. I know those conflicts sound like a lot of work, but they actually quite doable, so long as you pay attention.

But then you run afoul of a couple of segments where the game tries to be a bullet hell title, and really shouldn't do so. For instance, you go head-to-heads with a three-headed dragon at one point, and it's pretty much impossible to dodge all of its ordnance. The only way I found to kill this guy is to secure as many power-ups as possible and dump tons of lead into its heads, hoping its hit points run out before yours do, all while making the best effort you can to mitigate damage to your hull. 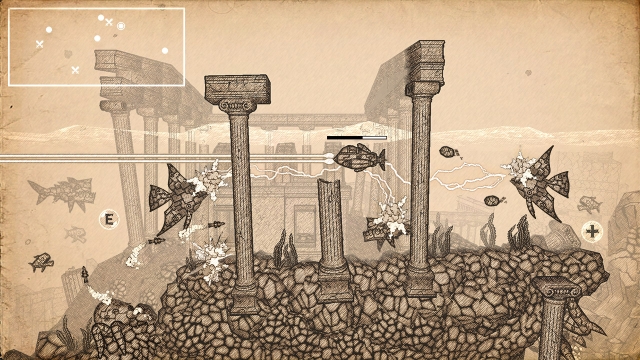 Here's the thing: if you die, you lose all of your boosts. You only gain one or two back when you respawn at a checkpoint, but in order to get back to a satisfactory level you'll have to farm power-ups from standard adversaries. Should you forgo this step, you'll be left you without an advantage against the next boss in line, essentially destining you for either failure or a frustrating, uphill struggle against the foe. I can't even begin to stress how tiring this rigmarole becomes, especially when you consider how often you perish throughout the campaign.

Take those two semi-damning flaws and add a real gut-punch: extreme repetition. You see, the map is only so large, and you'll cover pretty much the whole thing in no time. In fact, before you're even halfway through the campaign, you'll find yourself backtracking to older regions to square off against bosses in portions of the map where you previously fought another boss. To make matters worse, the game also rehashes boss designs occasionally, so you feel like you're constantly battling the same monstrosities each time. As you can imagine, the routine gets maddening. You sail across the map to a familiar location to wreck a massive robot that resembles a robot one you already wrecked, and you can't shake the impression that you're just going through the same cycle of events in a seemingly endless loop.

Granted, the game's mechanics are solid, it sports a wide variety of enemies, and each area is fittingly teeming with electronic wildlife to pulverize. Atlantis effectively scratches the "give me random shit to blow up" itch, but that's about it. 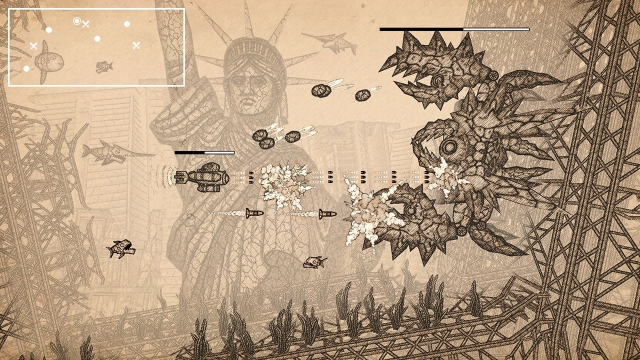 Could a plot have improved this adventure? Not likely. Call me crazy, but a title where you repeatedly engage in the same battles across tiresome environs, all while voyaging down corridors you've seen dozens of times, wouldn't benefit from the inclusion of drawn-out dialogue, sociopolitical chatter, clumsy cutscenes, or added context to the things you're reducing to waterlogged scrap metal. The impression I get is that this title was made with the same philosophy in mind that arcade and early Atari utilized: giving the player a quick rundown of what's happening and letting them use their imagination to fill in the rest. Some might charge this feature as lazy, but honestly it's kind of refreshing to see someone put it to use once again.

If anything, Atlantis needed something to break the tedium. Its content doesn't need to be complex, but it still should strive to change things up every now and then. At very least, you shouldn't feel like you're just plowing through the same scenes ad nauseam. Sadly, this adventure runs out of steam before you even get halfway through the list of bosses to hunt down, and it quickly grows to be one of those games where you constantly hit up guides or in-game progress reports to see how far you might be from the end.

Earth Atlantis can satisfy your desire for simple, intuitive shooting for a short while, but that's really it. Before long, it grows to be a repetitive, albeit still slightly fun, action title. Just so we're clear, I'm not advising you stay clear of this game if you're interested. I would suggest grabbing it and only playing it in spurts.

If you enjoyed this Earth Atlantis review, you're encouraged to discuss it with the author and with other members of the site's community. If you don't already have an HonestGamers account, you can sign up for one in a snap. Thank you for reading!

© 1998-2022 HonestGamers
None of the material contained within this site may be reproduced in any conceivable fashion without permission from the author(s) of said material. This site is not sponsored or endorsed by Nintendo, Sega, Sony, Microsoft, or any other such party. Earth Atlantis is a registered trademark of its copyright holder. This site makes no claim to Earth Atlantis, its characters, screenshots, artwork, music, or any intellectual property contained within. Opinions expressed on this site do not necessarily represent the opinion of site staff or sponsors. Staff and freelance reviews are typically written based on time spent with a retail review copy or review key for the game that is provided by its publisher.