Sydney Hunter and the Curse of the Mayan isn't the first game in this series featuring a character who could easily be confused with Indiana Jones (they're both men of whips and quips) -- it's the fourth. The earlier Sydney Hunter games were released for the already very dead NES and Super NES systems as far as I can tell, and both greatly resemble and pay homage to the ancient Colecovision title, Rick Dangerous.

This latest title is the only entry to make it to the 'big show,' but that doesn't mean that it has left its humble roots behind; a cursory glance at the screenshots will tell you that the visuals here are purposefully quaint and the game evokes the same old school aesthetic as its elder brethren. There is a lot of Maya lore to sink ones teeth into here, but suffice to say for our purposes that the Maya calendar (here, purposely, erroneously: Mayan) has been shattered, and our hero Sydney finds himself trapped in a subterranean world of linked portals where he is afforded the unique and daunting opportunity to right wrongs. A large cavernous hub will serve as the staging point from which Sydney must stake out and conquer portal after portal towards achieving his goals.

This is all fairly straightforward, but there is an interesting 'catch' that you will discover early in the proceedings. There are crystal skulls tucked away in each stage, and theyre often hidden or hard to get to. So, per the Difficult Retro Platformer Protocol, the risk associated with obtaining everything, is fairly high. However, deviating from that Protocol: these are not your typical collectibles, which you can take or leave as you see fit. Gaining entrance to the next portal depends on you having enough crystal skulls in your inventory. 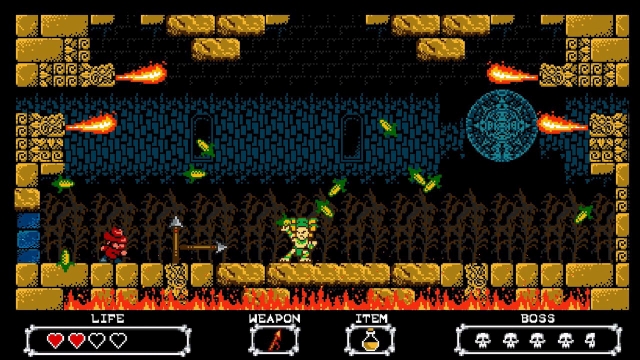 Unlocking portals early on this won't cause you much trouble as the skulls in the first few levels can mostly be stumbled upon along the beaten path, and mostly will not require you risking life and limb to obtain. Assuming youre a half-decent collector and assuming you dont function in SPEEDRUN MODE 100% of the time you play, you will have enough skulls on hand to smoothly progress through maybe the first half dozen levels as a matter of course. After that, it gets much trickier and youll come across skulls that will make you say: Nope, Im not staying in this room. At all. or, I'm not crossing that rickety bridge -- its not worth it. For many, youll want to leave well enough alone just so that you can ensure safe level completion.

What this will mean is that inevitably you will come upon a portal you cannot gain access to, and that's when you'll need to start replaying levels. There are other games that use this sort of function, and I've hated the approach in the past (FOX n FORESTS comes to mind). It's probably fair to say that gamers dont typically don't like being forced to replay levels to seek out missed items - it feels like a cheap, false way of extending the life of any given adventure.

And yet, Sydney Hunter's levels are so well designed. Save points are ideally placed so that there are just enough opportunities to save (so that you're unlikely to be cursing the game for being obnoxious) while they are also are limited enough that there's a real sense of anxiety once you move past the security of a save point in order to continue adventuring. It'll be undeniably stressful making your make your way past flame bats, spiked floors, crumbling bridges, reanimated skeletons and the rest of the cast of enemies and hazards youd expect to see in an Indiana Jones-esque undertaking.

That's Sydney Hunter's strength: Theres always a niggling doubt when you are learning the game that you mightn't make it to the next checkpoint intact. The difficulty curve feels ideal, which is a tough, nuanced balancing act to pull off. I will say that Sydneys gameplay does trend towards the hardcore; but he never asks of you anything crazy. You will need to be on your toes. You do have to progress with care. And your platforming skills absolutely must be on point. But thankfully you will not find yourself in situations where you are minutes and minutes between save points. 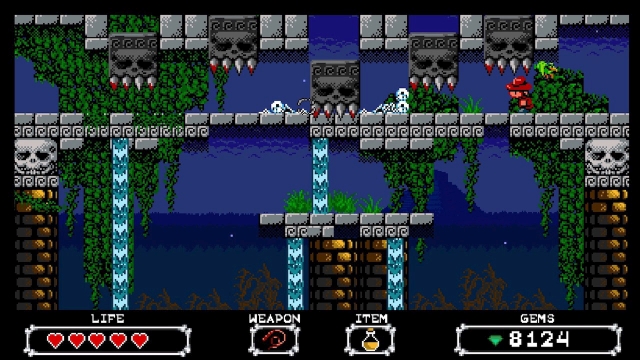 Again, Sydney Hunter's levels lend themselves to being learned upon replays, and the adventuring and platforming is tight and addictive; going back to find what youve missed offers an opportunity to further hone your skills and really fully adapt to the games idiosyncrasies and specific rhythm and timing. In a nutshell, the game is fun enough that replaying levels somehow won't feel obnoxious. In fact, this mid-game training will prepare you well for later levels as you'll be better at taking on everything the game throws at you. To wit: the powerful end-of-level guardians (they appear on the screen like Mega Man bosses!) will initially intimidate, but later on you'll have accrued more weapon options -- from your whip, to a boomerang and spear -- to go along with your hardened resolve.

If there's a weakness here, it's that there are many levels and they mostly look alike. There are exceptions, of course: bright outdoor levels, with blue skies overhead and mountains off in the distance. But mostly we're looking at brown, crumbling interiors of long forgotten caverns. I get that it's the game's theme, but it can feel a bit repetitive and a bit dull from a presentation standpoint. Thankfully, the music, while oftentimes strangely discordant, is extremely catchy and haunting and memorable enough that itll definitely stay with you once you power down the game.

Sydney Hunter and the Curse of the Mayan isn't quite for everyone. As I say, it does trend towards the difficult and there is that little matter of having to replay levels, but I feel the two ostensible faults go hand-in-hand. The game is hard; practice definitely helps. I was initially struggling in levels two and three, for instance, but by the time I was past the halfway mark, the tables had turned and I felt the experience was beginning to be comfortable. (And dare I say easy!) But throughout, whether it is being the hammer or nail, Sydney Hunter and the Curse of the Mayan is always fun.
4/5

If you enjoyed this Sydney Hunter and the Curse of the Mayan review, you're encouraged to discuss it with the author and with other members of the site's community. If you don't already have an HonestGamers account, you can sign up for one in a snap. Thank you for reading!

© 1998-2020 HonestGamers
None of the material contained within this site may be reproduced in any conceivable fashion without permission from the author(s) of said material. This site is not sponsored or endorsed by Nintendo, Sega, Sony, Microsoft, or any other such party. Sydney Hunter and the Curse of the Mayan is a registered trademark of its copyright holder. This site makes no claim to Sydney Hunter and the Curse of the Mayan, its characters, screenshots, artwork, music, or any intellectual property contained within. Opinions expressed on this site do not necessarily represent the opinion of site staff or sponsors. Staff and freelance reviews are typically written based on time spent with a retail review copy or review key for the game that is provided by its publisher.