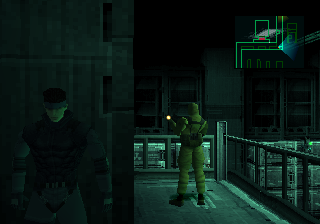 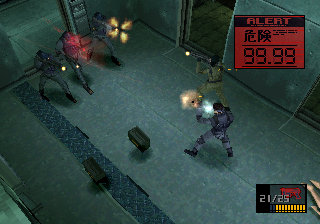 Is there any way to begin a dissertation on Metal Gear Solid without preface in the form of a dissertation on series creator Hideo Kojima? Domineering auteurs are hard to come by in a medium with such an importance on collaborative design as video games, but Kojima has accomplished that distinguishment by virtue of outlandishness, if nothing else. A dubious merit, albeit one largely to thank for the commercial success of his first true megahit. Kojima's ubiquitous creative presence is impossible to understate in relation to the game's legacy, for Metal Gear Solid is an anomaly in more than just aesthetics and tone.

It's doubtless that the first element conjured by a namedrop of MGS would be the storytelling. Metal Gear has an aesthetic teeming with personality: super-soldiers, super-weapons, super-weirdness. Mention high-tech espionage and political intrigue with a heaping dose of quirkiness, and everyone knows what series to which you refer. The stylish look and powerful sound are uniquely Metal Gear Solid, and this also reaches to the characters. Indelible art direction by Yoji Shinkawa's inimitable Chinese watercolor style hae cemented the images of Solid Snake, Revoler Ocelot, Colonel Campbell, and company into iconic legend; memorable acting took their voices to a similar distinguishment. The work put in from David Hayter to Paul Eiding and everyone else ranges from Saturday morning cartoon-cool to genuinely emotional, but it's seldom forgettable either way. That's nice because there's one more item that belongs on the earlier list of MGS's "supers": super-wordiness. 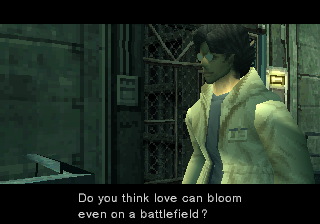 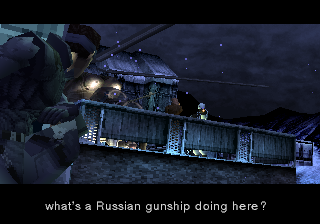 Kojima is renowned for his unique writing style, but as genius film critic Pauline Kael said of auteurs: "The smell of a skunk is more distinguishable than the perfume of a rose; does that make it better?" She appreciated eccentrics like Lynch and such, but Kael probably wouldn't have been a big fan of Kojima's style, what with the enormous exposition dumps, blatant messages, and direct conveyance of character emotion and all that. Even series translators have voiced similar sentiments on the matter. Make no mistake, Kojima brings some fascinating themes to the table -- genetics, government duplicity, destiny, emotional fulfillment, and more -- but when he isn't directly lifting elements from Escape to New York or Blade Runner or anything else on his VHS shelf, he's writing dialogue as if being paid by the word. A genius like Coppola [The Godfather trilogy, Apocalypse Now] knows how to convey, say, conflict's effects on the human psyche through implication and trust of audience inference; those with lesser skill have their characters spout 5+ minute speeches on the work's themes. Anyone with an ounce of reflection (admittedly a diminishing commodity) has something interesting to say; it is the job of the artist to communicate through unobtrusive, universally applicable means. The syringe can be as important as the medicine, even if said medicine is as intriguing as MGS's thoughts on innate ability and destiny and such.

The actual series of events isn't nearly as tangled as many make it out to be, yet one can be forgiven this misjudgment given the occasional clumsiness here, as well, with characters spending much too long reacting to changing circumstances and thereby interrupting narrative flow. It's important that the protagonist and the player share similar perspective and experience new events as they develop, but it's also important to hold the audience in enough respect so as to not make Solid Snake serve as an inquisitive echo to all the information being showered down upon his bandanna-clad head. The player should be smart enough to catch on to what he needs to without direct explanation, and this applies to the gameplay, too.

For such a critically lauded title, Metal Gear Solid has had little direct influence on stealth games aside from popularizing the general premise, and picking up a PSX controller and returning to the secret facility on Shadow Moses Island reveals why. A top-down camera that's too close to give situational awareness but too far to give detail follows a game of sneaky Pac-Man, with Snake walking around enemy sight cones and not much else. Supposed super-soldiers are deaf and myopic; the HUD's radar showing their line of sight is about all that matters, because you can run in circles around their non-existent peripherals without attracting attention. The linear level design fails to make use of this intuitive, arcade-y system, because there's almost always only one reasonable solution to any scenario: keep your eyes glued to that hud radar and avoid the sight-lines, occasionally using the odd gadget that serves as a gate-key more than a dynamic sandbox-tool. Understandably unreliable combat is underplayed save for scripted events and boss fights, which range from creatively clever to astoundingly awful. Overall, pretty bare-bones, but there's your radio beeping with calls waiting to explain to you that you need to use the elevator not six whole feet away from you, anyway. At least there are no tank controls, although the camera will wildly switch angles so as to confuse your inputs at times. Tactical espionage action? 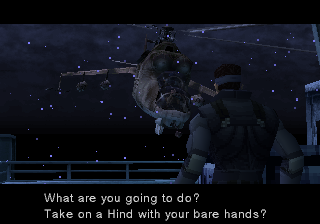 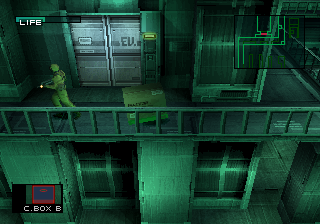 If the writing has the subtlety of a hand grenade and the gameplay is as smooth as a sandpaper cactus, why the cult following? Well, for all the inconsistency in quality of dialogue and plotting, Kojima knows how to do certain elements rather well. For one, Metal Gear Solid is one of those games in which what's going on has weight and consequence. There is little room for player choice -- yet another regrettable failure to utilize the medium effectively -- but's here has impact. Some terrorists took over an island base? That matters big-time, 'cause they're gonna launch a nuke. One of the two hostages just died on you? That matters big-time, 'cause you're short one source of necessary info on what you need to do to stop the threat. Even seemingly innocuous actions turn out to be game-changers, and aided by appropriate foreshadowing, new developments cast old events in surprising new lights. Again, Kojima doesn't know how to best deliver them, but he has some endlessly fascinating ideas to share. And his unbridled enthusiasm to do so manifests itself in campiness intentional and unintentional, with his cast of hardened soldiers as likely to crack wise as they are to wax philosophical, so for some, it can be hard not to have fun with him.

Ultimately, dubbing Metal Gear Solid an acquired taste may be giving the work too much credit considering the simplistic gameplay and clunky storytelling. Thief came out the same year and beats it in nigh-all respects; prior titles like Wing Commander and even Kojima's own Snatcher had tighter writing that better served the medium -- branching paths and player control of information flow/worldbuilding pace, respectively -- but for all its blatant missteps and overt "homages," there's nothing out there quite like Metal Gear Solid. It took gamers old and new alike and showed them a gonzo world of conspiracies and soliloquies, of snow-coated steel and blood-soaked walls, of desolate winds and haunting music, of psychic apparitions and bipedal tanks, of loves and wars. It isn't the best direct influence in stealthy game design and in writing, but it helped draw attention to those fields so that better titles like Deus Ex, Splinter Cell, and MGS's own sequels could better advance those ideas. Metal Gear Solid set the stage for the best that was yet to come, and regardless of the less unfortunate trends set in motion here or whether Kojima's brand of craziness is to your liking or not, that's something we all can appreciate.
3/5

© 1998-2021 HonestGamers
None of the material contained within this site may be reproduced in any conceivable fashion without permission from the author(s) of said material. This site is not sponsored or endorsed by Nintendo, Sega, Sony, Microsoft, or any other such party. Metal Gear Solid is a registered trademark of its copyright holder. This site makes no claim to Metal Gear Solid, its characters, screenshots, artwork, music, or any intellectual property contained within. Opinions expressed on this site do not necessarily represent the opinion of site staff or sponsors. Staff and freelance reviews are typically written based on time spent with a retail review copy or review key for the game that is provided by its publisher.