A few years ago, I confidently wrote a post on another site saying that Nintendo wouldn't likely ever produce games for the iOS platform, let alone anything starring Mario. It just wasn't something that I figured would ever happen. Times change, though, and Nintendo clearly sees mobile devices as a great way to expose new players to the company's beloved franchises. Super Mario Run is proof enough of that.

From what I've read, Super Mario Run was anything but a B-team effort. Shigeru Miyamoto, Mario's creator, reportedly spent more hands-on time with Mario's iOS debut than he has on any title to feature the portly plumber since 2007's Wii classic, Super Mario Galaxy. Nintendo wanted this new title to have some serious impact, and perhaps those wishes will even come true. To me, though, the game suffers from enough minor flaws to prevent true greatness. 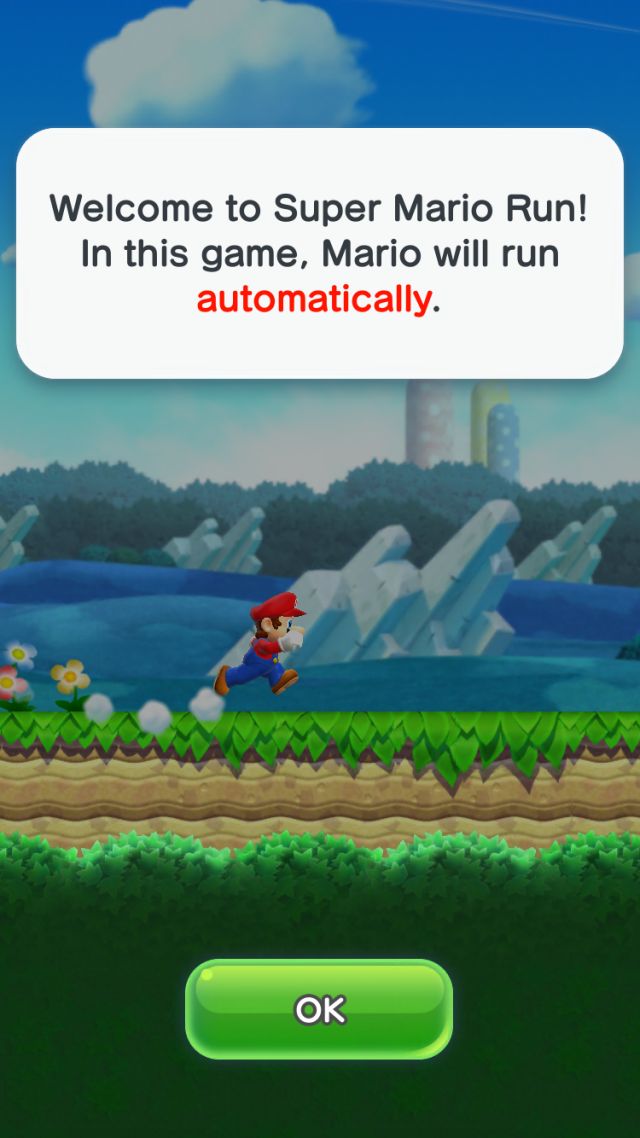 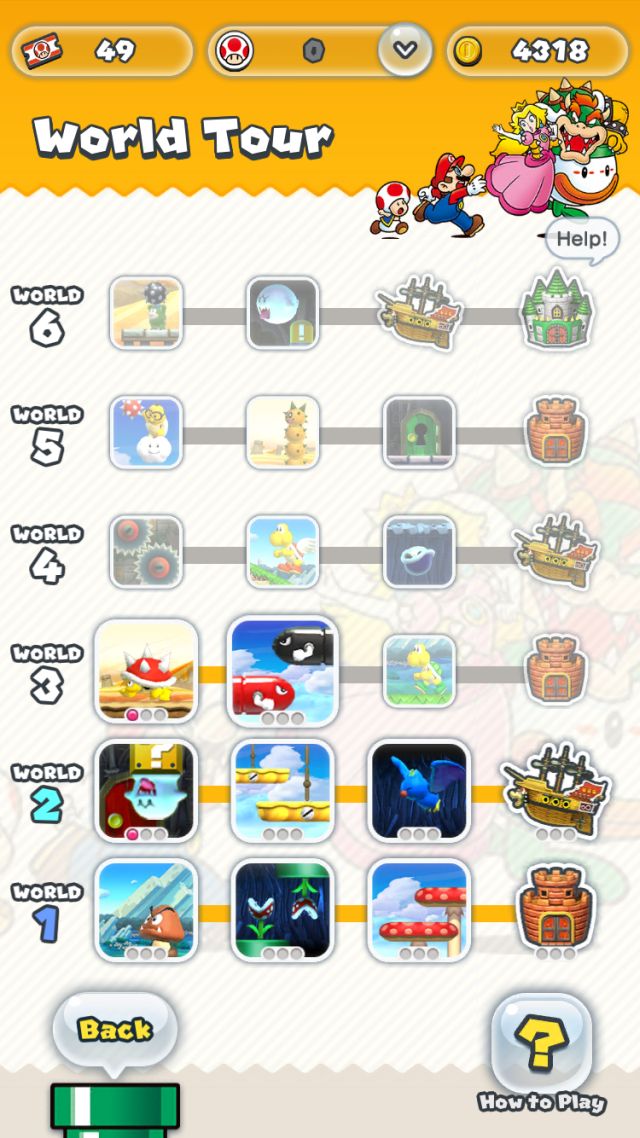 Super Mario Run is an "endless runner" that isn't comfortable with the "endless" part of the equation. I'm not a huge fan of the genre as a general rule, because I like to feel like I'm actually getting somewhere. That sense is provided here. There are three basic game modes: Tour, Rally, and Build. They work together to ensure that players have a proper sense of investment and are rewarded for continuing to play. Normally, I would say that's just free-to-play hooks, but this game doesn't follow that approach; you can play the first few levels, and from there you pay $9.99 to unlock the rest of the adventure. There are no micro-transactions or forced ads, and I appreciate that.

At a glance, the Tour mode might seem like the meat and potatoes of the experience. Players run through six worlds, and each consists of 4 stages. That's a total of 24 levels, short even of the 32 featured in the original Super Mario Bros. game, but it's not all bad news. Once you access a stage, you can play it again whenever you like by tapping it from the menu, and there are reasons to do so perpetually because every stage has special coins to gather.

I'm not big on collectibles, but I know some other players are. The first time you run through a stage, you'll notice conspicuous pink coins in slightly inconvenient locations. If you gather all five of them during a single run, they shuffle location and turn purple. If you manage to snag all of those on a subsequent trip through the stage, then they shuffle yet again and turn black. You'll want to go through each stage a minimum of three times, if you are obsessive about gathering everything. That number is actually on the low end, since levels often feature branching paths and you must memorize coin locations if you're to have any hope of completing your collection. 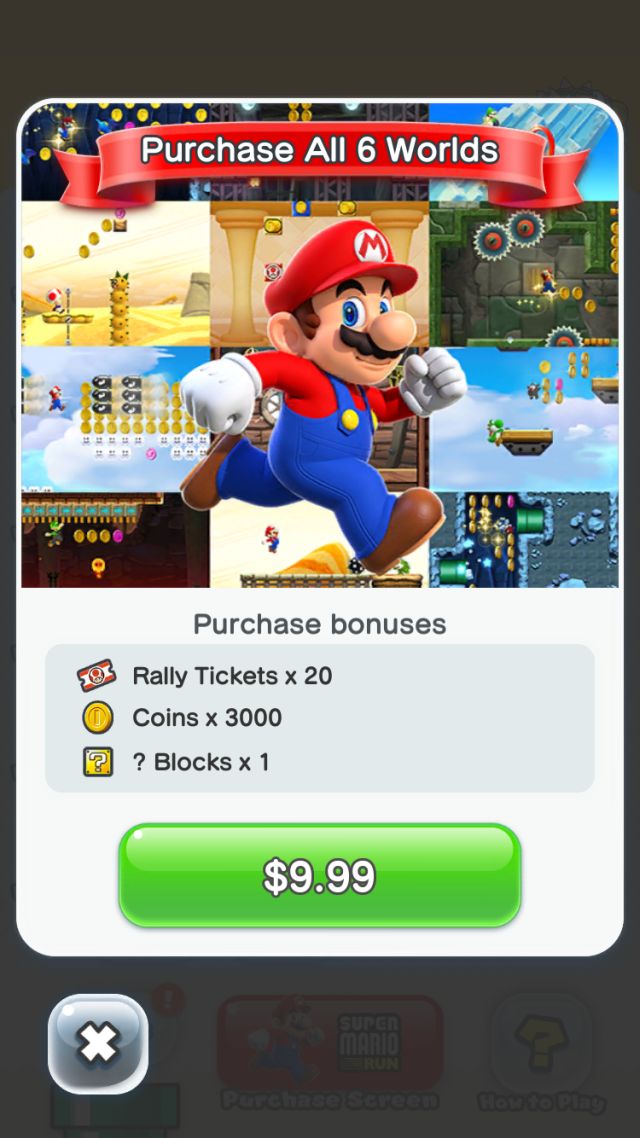 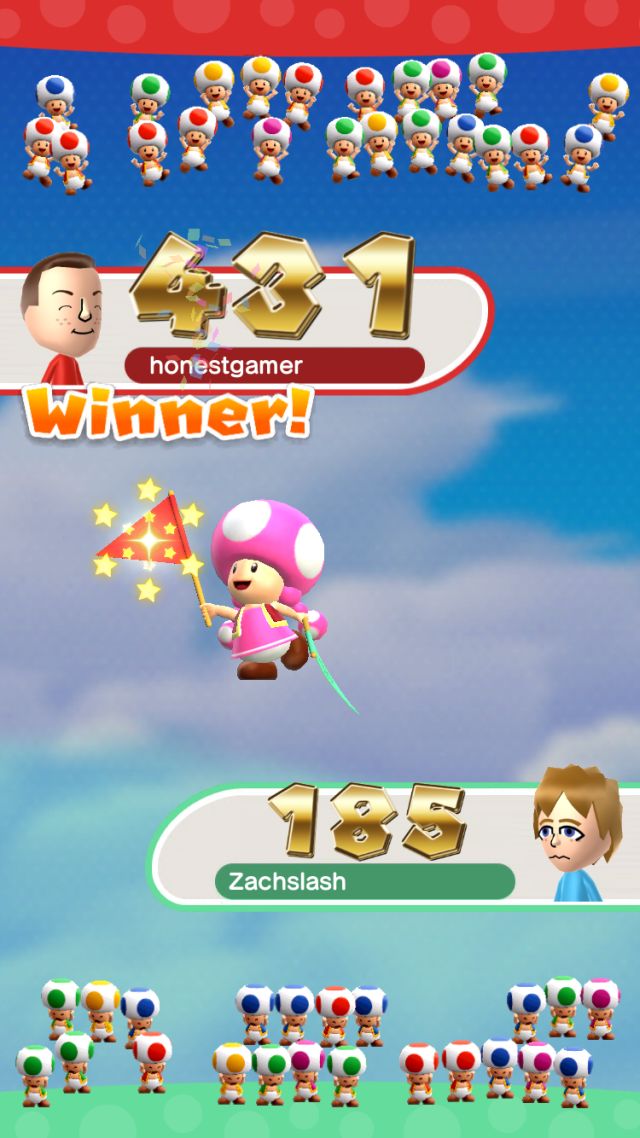 As Shigeru Miyamoto himself noted, Super Mario Run is designed so that you can play it with one hand. With your other, he said, you might be eating a hamburger. That's a nice notion, but the game is sufficiently demanding that you'll likely prefer to avoid distractions, even when they come in the form of a tasty Big Mac. Stages can get downright difficult, particularly in a couple of instances right near the end. That's even before you worry about bagging the aforementioned coins.

Much of the game's challenge comes from the fact that Mario runs through some fairly treacherous stages all by himself. He doesn't stop unless you step on a special block or run up against a high wall. He also takes certain other actions, which have about a 50% chance of being useful. As he nears an approaching enemy, for instance, he'll hop right over it to avoid taking damage. If you want to land on a patrolling Koopa or Goomba or whatever, you have to jump precisely ahead of time, factoring in the plumber's forward momentum as you do. And if he jumps toward a ledge and it comes within reach of his outstretched hands, he'll pull himself up and keep going without any additional direction from you. This is good when you're trying to reach the high road, but not quite as welcome when he climbs his way into the path of a wrench that an enemy threw.

As Mario runs, he occasionally interacts with pieces of the environment. Arrows point in various directions, and passing by them could cause coins to appear. Another arrow launches Mario forward at high speed, allowing him to clear wide gaps with ease. As you might expect, he also is able to wall jump along high vertical shafts. If he leaps into the air, tapping the screen again and holding it cases Mario to spin so that he glides for a short distance, which winds up being tremendously important. Growing accustomed to the various control quirks takes time, and long-time players will have to unlearn some muscle memory, but mostly it all works quite well. The simple control scheme doesn't prevent Super Mario Run from feeling like a proper installment in the series, and the visuals and audio seem to have been pulled from the New Super Mario Bros. series. 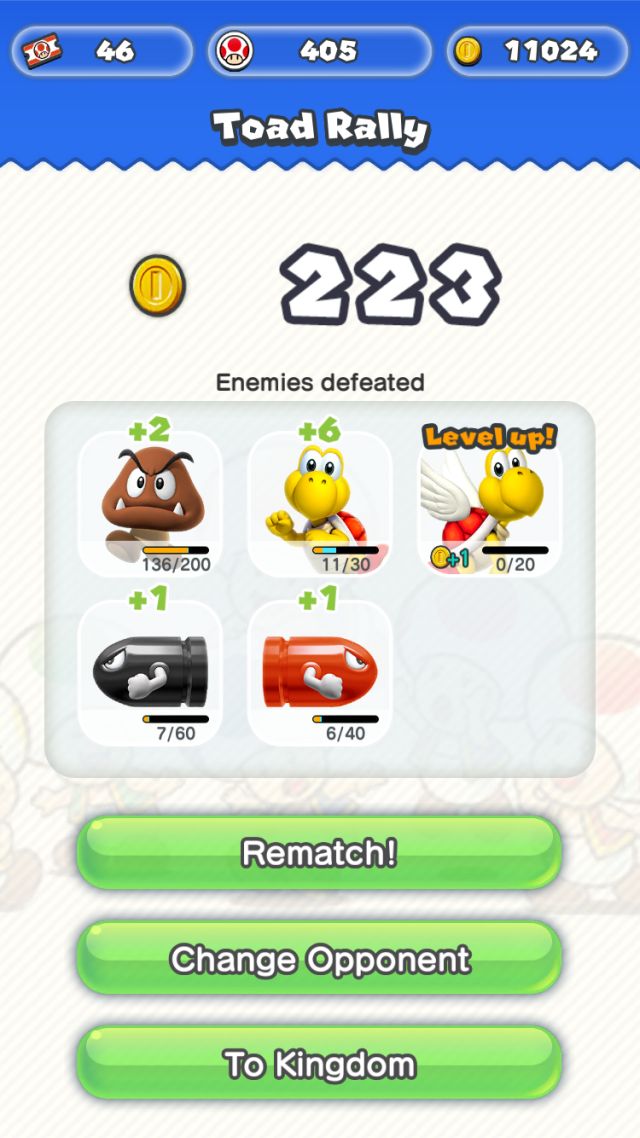 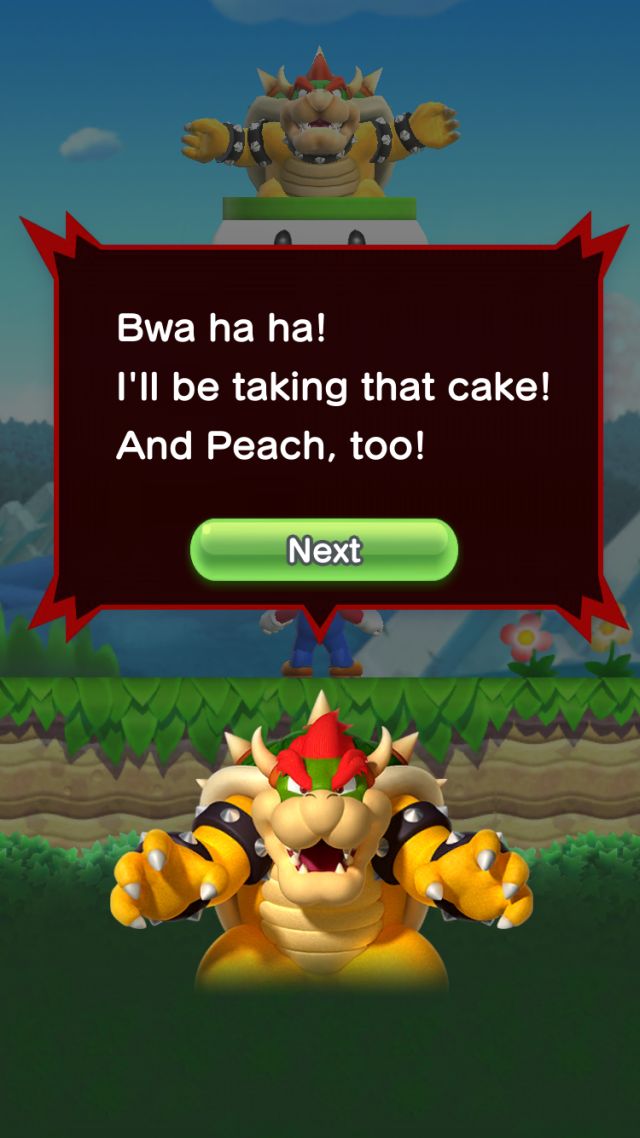 When you grow tired of Tour, there's always the Rally mode, which lets you compete against other players. This is where I wound up spending most of my time with the game. The way it works is that you select one of a handful of remixed stages, and then you rush through them while Toad characters watch from the sidelines. Your AI opponent plays in the "style" of some other player, and only one of you can win. At the end, coins gathered are tallied, and additional coins are awarded based on how spectacular your play was. Whoever wins gets to recruit a number of Toad characters to his or her kingdom.

The Rally mode ties in closely to the Build mode, because you have to grow your population to get anywhere. There are several colors of Toad, which show up in different Rally stages. If you want to build a nice mushroom house in your kingdom--which is presented as a basic screen that you can expand over time--then you have to convince enough Toads of the corresponding color to move to your version of the Mushroom Kingdom. Each Rally run is a chance to recruit more, but you also run the risk of losing a few of your residents if your opponent manages a superior performance. This becomes more frustrating than I think Nintendo intended when you run into control quirks, or if the ghost character you are racing against distracts you sufficiently that you lose track of what your version of Mario is doing. 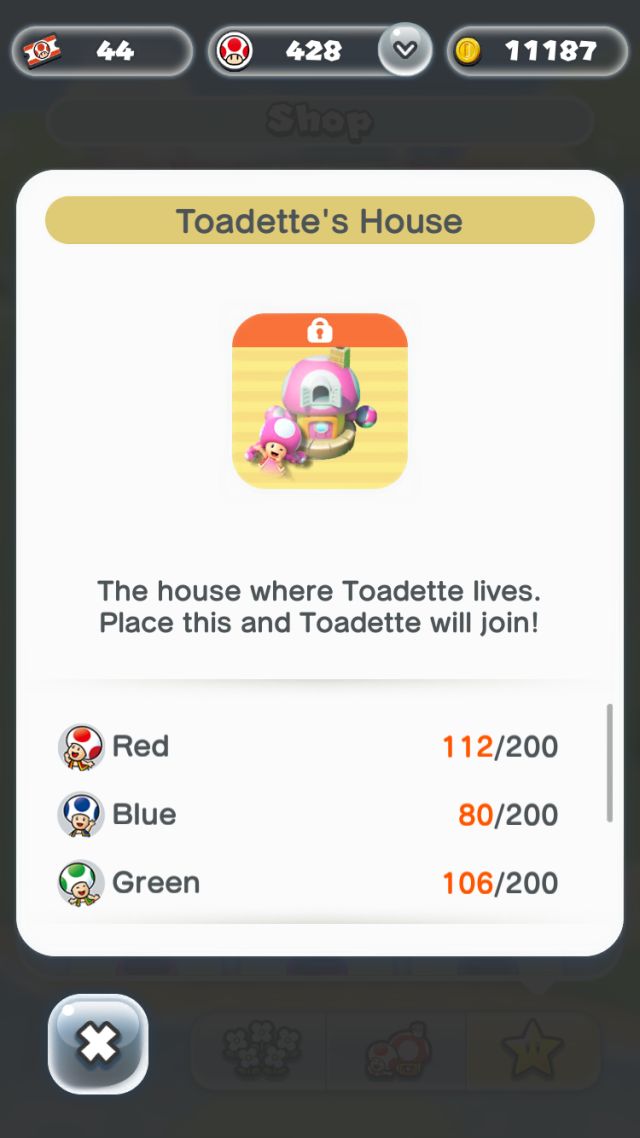 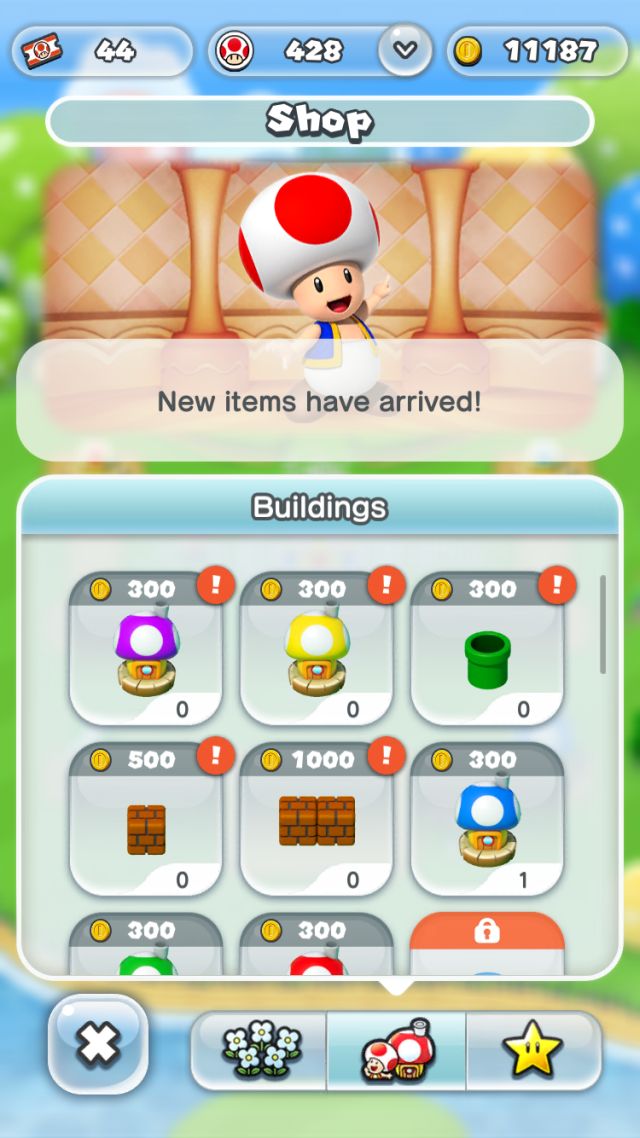 Another complication is that you can't just play Rally as often as you like. To compete, you have to obtain special tickets. You do so by clearing worlds in Tour mode, or by gathering the pink coins in those stages, or even by playing mini-games every 8 hours or so. I haven't run out of tickets yet, even though I've played through probably around 50 events over the last 24 hours or so. The game definitely isn't trying to hold out on players.

Super Mario Run isn't a game I ever thought Nintendo would make, but it manages to produce intense platforming action even without the classic d-pad. Mario's tendency to take certain actions on his own may initially confuse veterans, but they should ultimately find that the experience works much better than the restrictive iPhone hardware deserves. The game looks the part of a classic Mario title, even if it doesn't always play in that style, and the three modes give players sufficient cause to return often. I definitely believe the game is worth the $9.99 asking price, but it doesn't replace the classic platformer titles that the plumber has appeared in over the years. Look at it instead as an appetizer for the main course.
4/5

If you enjoyed this Super Mario Run review, you're encouraged to discuss it with the author and with other members of the site's community. If you don't already have an HonestGamers account, you can sign up for one in a snap. Thank you for reading!

© 1998-2020 HonestGamers
None of the material contained within this site may be reproduced in any conceivable fashion without permission from the author(s) of said material. This site is not sponsored or endorsed by Nintendo, Sega, Sony, Microsoft, or any other such party. Super Mario Run is a registered trademark of its copyright holder. This site makes no claim to Super Mario Run, its characters, screenshots, artwork, music, or any intellectual property contained within. Opinions expressed on this site do not necessarily represent the opinion of site staff or sponsors. Staff and freelance reviews are typically written based on time spent with a retail review copy or review key for the game that is provided by its publisher.