When I'm being entirely honest with myself, I'm forced to admit that I don't tend to play letter-based puzzle games nearly as well as I probably should, given that I am a writer. I always try to utilize the obscure words that I'm secretly proud to have rattling around in my head, and they're rarely practical for use in a game such as, say, Letter Quest: Grimm's Journey Remastered. 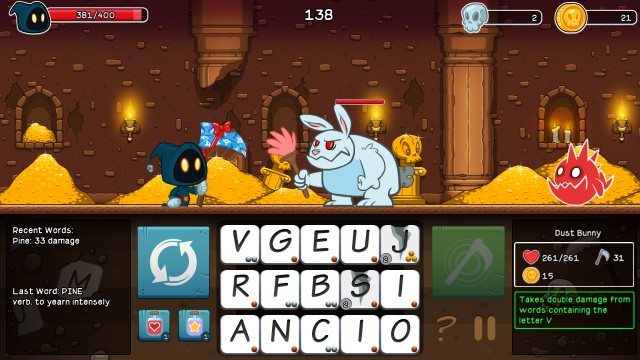 As the title suggests, Letter Quest has made a previous appearance. The developers at Bacon Bandit Games apparently produced their first version for the PC platform, and that effort materialized in November of 2014. I haven't tried it, but I bet the concept was well executed even then. Now, on Xbox One, it's (presumably) an even greater treat.

The idea in Letter Quest is that you're a cloaked fellow named Grimm (who looks a bit like the Grim Reaper). You are craving pizza, despite your body being comprised entirely of bones, so you follow bad directions that take you through several treacherous regions as you track down that tasty treat. You'll have to conquer a variety of woodland creatures and ghosts that all seem to hunger for your untimely demise, in the way that only video game foes can. Fortunately, you are armed with a scythe that allows you to arrange letters and form words to inflict damage in turn-based combat.

The premise is admittedly quite silly, but it works well enough to keep a person engaged, thanks to vibrant visuals that look like they could have been ripped right out of a popular cartoon, a forgiving difficulty level, and a fun upgrade system. 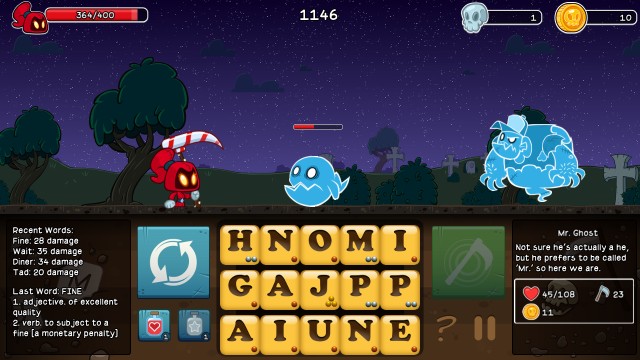 Most of the time you spend with Letter Quest is likely to be devoted to the story campaign. You advance along a map, which eventually is marked by a total of 40 stages. Each of those areas can be conquered in a simple default form, or you can try additional challenges that add a time limit, present other special victory requirements, or make your foes considerably more powerful so that you have to use more strategy to survive.

Sometimes, you'll come across a treasure chest that you can open by playing a rudimentary version of hangman, guessing letters and trying to fill in a word. Mostly, though, you have a five-column grid with three rows. You can generally take as long as you like to activate tiles and spell out words consisting of three or more letters. Virtually all slang and most profane options are off the table. I've never quite understood why developers won't let kids spell out naughty words that are already clearly part of their vocabulary, but whatever. It probably keeps a parent happy, somewhere in this diverse world we all share.

Although most of the time you don't have to worry about running out of time as you decide which words to spell, though, there are still complications. Your enemies possess abilities that allow them to deactivate some tiles for a set number of turns, or they can place traps so that you take damage when using a tile. There are other tricks, as well. Sometimes, crystals also will appear, so that you can claim a special reward such as a shield that reduces the damage you take for a few turns, or an enhancement to your attack power. 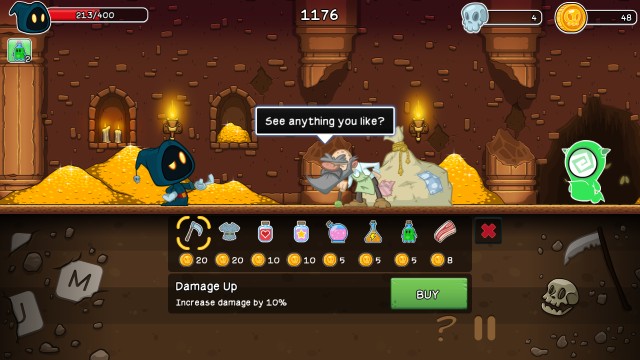 As you clear battles within a stage, you'll gain currency that you can spend with a wandering merchant, which allows you to restore health (by eating bacon) or gain boosts similar to those otherwise activated by crystals. Your foes also drop crystals when defeated, and you'll find piles at the end of a run. You can spend that bounty in a more permanent shop to upgrade your character so that he can take more damage, or deal it more capably, or to improve him in other ways. It's possible, for example, to stock up on expensive potions so that you're more likely to survive a boss encounter.

If I've made this game sound difficult, though, don't worry overly much. I already mentioned that I tend not to do as well at this sort of thing as I should, and yet I rarely failed a run. As long as you're purchasing the right upgrades at the shop, you should have an easy time felling most monsters except on the most difficult variation of a given stage. I generally would clear a timed challenge with more than half of my time remaining, and I can assure you that's not because I'm some sort of super genius. You were thinking that, bless you, but I'm honestly just a normal person. But I digress. My point is that there's enough here to eventually challenge gamers of virtually all skill levels, but only those with a small vocabulary are likely to find themselves properly stymied.

While working my through the campaign, I almost always had something to save up for, thanks to all of the aforementioned upgrades. There are customization options, as well, such as alternate tiles that come available when you reach certain objectives. The game is also very generous about doling out achievements. I spent around 8 hours on the campaign, clearing all of the 120 regular medals and around a quarter of the 40 special final challenges. It seemed like every few minutes, a prompt would let me know I'd done something special that warranted another achievement. 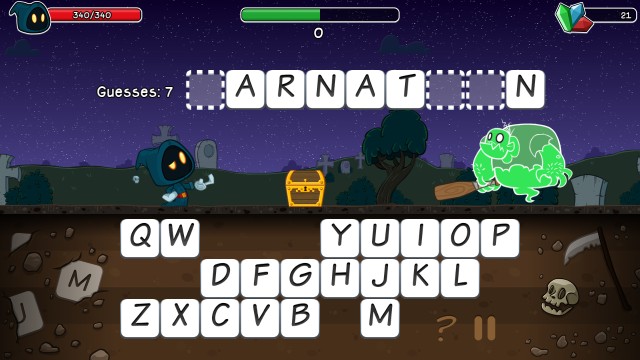 If you get tired of the campaign, there's also a more challenging Endless mode that can add some time to the clock, though it's not different enough to extend the game's longevity very much. You select options such as the environment where you wish to play and the soundtrack, then see how many enemies you can defeat--with rare stops to visit a merchant along the way--before you finally sustain enough damage to end your run. My problem was that by the time I finally tried out the mode, I had basically tired of the formula enough that it didn't entertain me long.

Letter Quest: Grimm's Journey Remastered is a basic but effective puzzle game that should appeal especially to younger gamers, and to those who speak of dictionaries and thesauruses in glowing terms. There's nothing here that's remarkably new, but it has all been tied together in a pleasing manner that should keep you busy for 8 or 10 enjoyable hours. I can also imagine eventually wanting to return to it periodically after that, just as a way to relax. There's not a whole lot like it on the Xbox One right now, and there probably never will be, so definitely give it a look if you want something a little different. It's almost as good as pizza!

If you enjoyed this Letter Quest: Grimm's Journey Remastered review, you're encouraged to discuss it with the author and with other members of the site's community. If you don't already have an HonestGamers account, you can sign up for one in a snap. Thank you for reading!

© 1998-2021 HonestGamers
None of the material contained within this site may be reproduced in any conceivable fashion without permission from the author(s) of said material. This site is not sponsored or endorsed by Nintendo, Sega, Sony, Microsoft, or any other such party. Letter Quest: Grimm's Journey Remastered is a registered trademark of its copyright holder. This site makes no claim to Letter Quest: Grimm's Journey Remastered, its characters, screenshots, artwork, music, or any intellectual property contained within. Opinions expressed on this site do not necessarily represent the opinion of site staff or sponsors. Staff and freelance reviews are typically written based on time spent with a retail review copy or review key for the game that is provided by its publisher.