I wont pretend that Selvaria Bles wasnt a reason for giving Valkyria Chronicles more than a cursory glance, but as appeal goes, VCs is more than skin deep. Sega has a long history of bungling franchises, but it appears that whomever lined up this shot has the keen eyes of Sergeant York. It also helps that this is a port from the PlayStation 3, even if it flawed.

On Windows, this port will run 1080p at 60fps if your graphics card can handle it. Until I upgraded from my GeForce 650 (a proper workhorse, that card), I couldnt get it to stay in that butter zone. Naturally, controller support is available, but thats limited to Xbox 360 and One controllers with only third party support for PS4 gamepads. Failing that, keyboard and mouse functionality is on point, so you can stay on target.

Aesthetically, you might as well be playing an anime; everything in the world is polygonal and animated in remarkable detail and smoothness. Units share animations  all of them  and sometimes a body will land on air after falling from a roof, but if I were looking for perfection from Sega, well thatd be kinda dumb, wouldnt it? Having watched a portion of gameplay, I didnt expect the extra graphic fidelity; a pretty shader effect turns scenes into hand drawn art that youll appreciate at HD resolutions.

Welkin Gunthers world is a peaceful one; he is a nature lover, dedicated and protective of his family and sanctity of life. When the resistance rolls into town, they are followed very closely by Imperial soldiers who explode a rather tall windmill. Before he knows it he is commander of a small squad of rebels, fighting for the future of Gallia. He is joined by Alicia Melchiott, a righteous, sharp tongued young woman who shares his belief and fights by his side, as second in command and invaluable Scout. 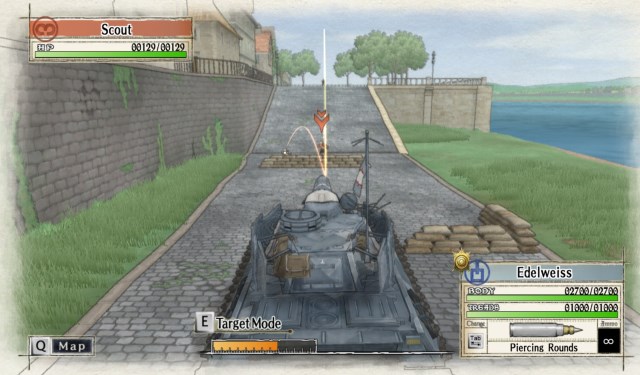 They are aided by one of the most formidable Units in VC; a tank called the Edelwiess. This will give you the edge in most skirmishes, but will require tactful deployment and maintenance if it is to be of any lasting value. Once youre enlisted, youll have access to a book styled menu that will enable you to recruit and train troops, repair and upgrade weaponry, and manufacture performance enhancing upgrades for your tank Units. You can also interact with various NPCs and revisit past missions for experience youll use to improve your chances on the battlefield. Unlike genre examples like Final Fantasy Tactics, where units have their own experience pool, classes train and gain ranks together.

Like most games of this type, your command decisions will be the deciding factor, but when your troops are under siege, a good suit of armor and an Order can make your team much more survivable. Orders are randomly activated, so all you can do is give them the chance, and there arent many to go around. This places appropriate emphasis on understanding the purpose and function of VCs classes. 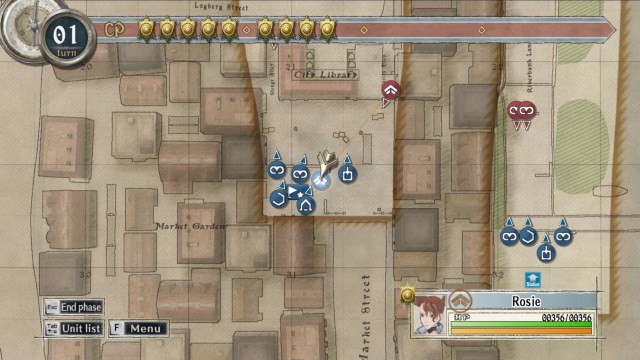 There are five in all: Scouts wear light armor, but can travel faster and further than any other unit in a single turn, and sport a rifle of notable range and utility. Shocktroopers carry a sub-machine gun and are well suited against assault units and entrenched artillery. The Lancer uses a missile like projectile weapon that is effective against armored units, and can take out tanks in just a couple shots if you approach from the right angle. They are the most heavily armored unit and are quite slow as a result. Snipers, imaginably, are light armored, fast moving units that can pick off enemies from a distance with high accuracy. Engineers can repair tanks, resupply ally ammo and are a crack shot with a rifle. Youll want to have one of these in each of your teams when there are more then one deployment points. Note that most units can use ragnite to restore their own or allies health; medics stay off the field unless a unit falls in battle.

Welkin, the commander, issues orders with Command Points, and each action and unit has a different cost. Moving the Edelweiss will eat up two, but moving an infantry(wo)man needs just one, and you have a finite amount each turn. The trade-off for this is that any unspent Command Points are accumulated each turn. This allows you to reserve some actions for later and adds a unique dimension to tactical decisions. 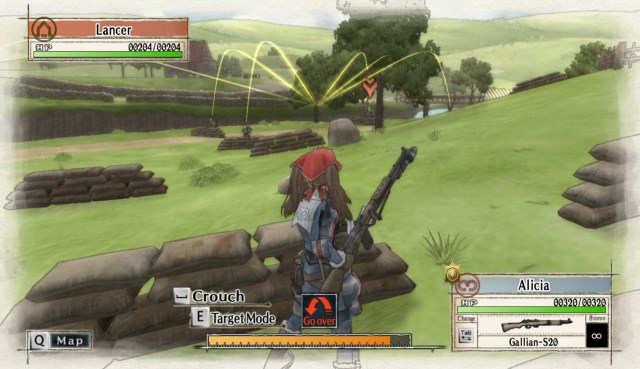 Once a unit as received orders, your perspective is shifted to over-the-shoulder third person, and you control their actions. You can use the terrain to your advantage by ducking behind cover, dropping prone into pits, or flanking a unit for a critical hit on a weak point. Who you choose to enter combat is just as important to keep track of as the units you recruit. Each is an individual with their own specialties, preferences, weaknesses and strengths. Some units will gain bonuses around others they feel affection toward, and its details like this that make the gameplay a psychological challenge from recruiting to first action.

Since this isnt Dirtface Crawl Sneak Rebellion, Valkyria has got to come into play somehow, right? Without resorting to spoilers, your company will uncover clues about a mythical race of female warriors called exactly that, and eventually youll be working with the unique attributes of another powerful unit. Meanwhile, youll be sneaking through grass, tiptoeing around mines, avoiding ambushes and doing your best to ensure none of your recruits die. If a unit falls, you can send a nearby ally to call in a Medic to revive them. My habit is to over-train, lessening that outcome, but thats what save files are for, after all.

Naturally, VC isnt all dirt, pretty explosions and depleted health bars: There are side missions, a pesky, charming reporter whos cataloguing your exploits, backstory to unearth, and a little pig with wings. Some of this may seem stereotypical, like a trip to the beach, but when theres a break in the action, you take what rest you can get. Theres also a very interesting sub-plot involving Welkins sister, Isara, who assumes the role of tank pilot. Shes sturdier than she looks, but thats one of VCs messages: Never underestimate the little guy.

I found casual moments of reflection between combat to be enjoyable, and learned more about the characters. I also grew to dread every turn it would take to revive them in fear of permadeath. Even the regular troops become endearing  theyre your team; treat them well and the day is yours. Yes, I understand you can cheese through missions with the Scout, but to do so robs you of the hard won victories that earn you the confidence and tactical stripes youll need to face greater odds. Because theyll always be greater.

There just isnt anything else like Valkyria Chronicles on Steam; its well animated aesthetic, solid voice acting, and varied missions put it in the higher ranks of similar titles. For a tactical dummy like myself, VCs forgiving nature reinforces my confidence by not punishing me too badly for rushed decisions. It also comes packed in with the DLC that was extra on the PS3, so thats value added. Even three years since launch, it is worth full price, and is a steal at anything less. Now, you have your orders, go! Enjoy!

If you enjoyed this Valkyria Chronicles review, you're encouraged to discuss it with the author and with other members of the site's community. If you don't already have an HonestGamers account, you can sign up for one in a snap. Thank you for reading!

© 1998-2022 HonestGamers
None of the material contained within this site may be reproduced in any conceivable fashion without permission from the author(s) of said material. This site is not sponsored or endorsed by Nintendo, Sega, Sony, Microsoft, or any other such party. Valkyria Chronicles is a registered trademark of its copyright holder. This site makes no claim to Valkyria Chronicles, its characters, screenshots, artwork, music, or any intellectual property contained within. Opinions expressed on this site do not necessarily represent the opinion of site staff or sponsors. Staff and freelance reviews are typically written based on time spent with a retail review copy or review key for the game that is provided by its publisher.